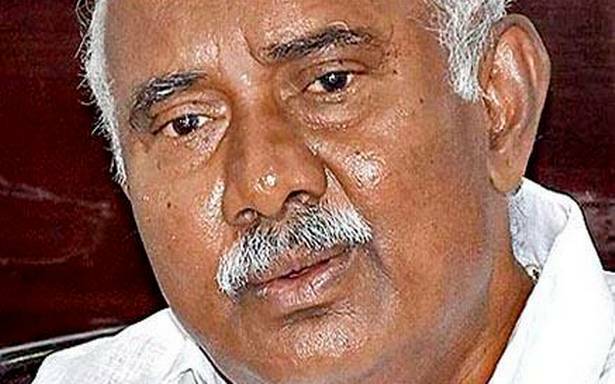 He said the raids carried out by the Income Tax Department against Mr. Yediyurappa’s aide and Irrigation Department contractors had inspired confidence among the public that the central agencies were acting against corruption. He also wondered out loud if Mr. Siddaramaiah and Mr. Kumaraswamy were in “favour of corruption”.

He asked why the two leaders were complaining when Mr. Yediyurappa himself had welcomed the raids. He accused the Congress and JD(S) leaders of “faking” concern for Mr. Yediyurappa with an eye on the Veerashaiva community votes. “Who are you trying to impress? If you are thinking it will bring Veerashaivas to the Congress or the JD(S) with such statements, you are being foolish. The community is very intelligent,” Mr. Vishwanath said.

He also claimed that he had spoken out against the corruption in the Irrigation Department four days before Mr. Yediyurappa resigned as Chief Minister in July. “I had raised the issue with regard to the hurried finalisation of tenders worth more than ₹23,000 crore in the Irrigation Department on July 22, four days before Mr. Yediyurappa resigned,” he said.

Mr. Vishwanath claimed he had not only revealed the details regarding the hurried finalisation of tenders before the media, but also written letters to senior BJP leaders in New Delhi. The BJP leader alleged that the tenders were finalised at a meeting attended by not only senior officials of the department, but also a few MPs.

Furthermore, Mr. Vishwanath trained his guns on Mr. Siddaramaiah for “finishing” the Lokayukta by disempowering it from investigating matters relating to corruption. He alleged that the former Chief Minister had diluted the powers of the Lokayukta to save himself from prosecution in the Arkavathi Layout scam.

He urged Chief Minister Basavaraj Bommai to revive the Lokayukta and “send a chill down the spines of those who are corrupt”.