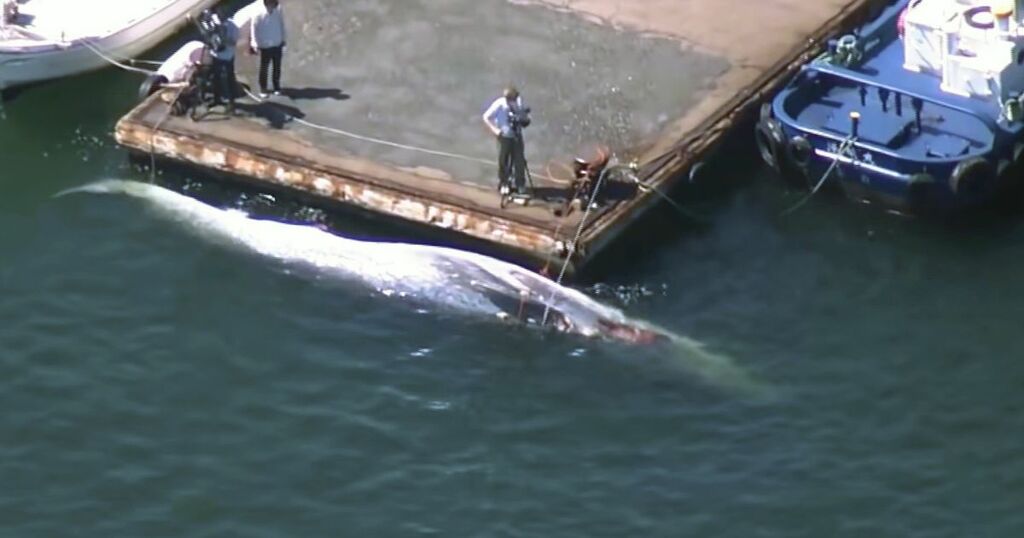 A 39-foot whale was found crushed and hanging off the bow of a tanker after being dragged across the Pacific Ocean to Japan.

Shocking images show the gigantic carcass found wedged on the vessel as the ship sailed into the port of Mizushima in Kurashiki city last month.

The coast guard was alerted to the incident after locals caught sight of the dead whale.

"I've lived for more than 80 years, but it's my first time [seeing a whale]," one eyewitness said, according to the Daily Mail.

The Mizushima Coast Guard's Office later identified the creature to be a male Bryde whale, weighing in at five tons, reported Insider.

The tanker crew was reportedly unaware they had struck the whale and dragged it across the Pacific Ocean, according to Japanese newspaper Yomiuri Shimbun.

A spokesperson from the Mizushima Coast Guard Department announced that they would be investigating the incident to prevent it from happening in the future.

Michael Fishbach, executive director and co-founder of the Great Whale Conservancy, revealed to Insider that a dozen whales are killed by a ship for each one that is recorded.

He said: "Because of the negative buoyancy of the whales, they just sink straight to the bottom after they die, except on rare occasions like this one, where the whales are struck in the centre of their body, and you have a situation as you see in the above image."

"There's no question that the number of whales killed by ships each year is in the 1,000s each year."

The whale expert suggested that the number could be decreased if a body was appointed by the industry to approach the shipping companies with a "calm, combined effort" to put forward measures and changes.

Fishbach added that around 60% of the ships involved in whale strikes are container vessels.