Sheep with five legs spotted among Orroroo lamb flock, with 'intrigued' farmer to raise it as a pet 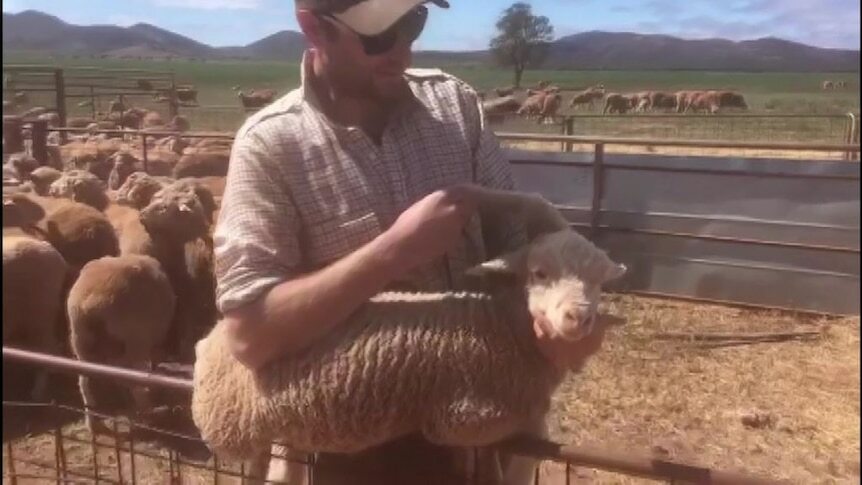 If someone told you they'd just seen a five-legged sheep, you might assume they were trying to pull the wool over your eyes.

But not Orroroo wool farmer and shearer Sam Kuerschner.

About three weeks ago, when he was sitting down taking a break near the pens on his farm in South Australia's Mid North, his father spotted a striking specimen — with an unusual appendage coming from its head — among the flock of lambs.

"He had a bit of a second glance and said, 'That sheep's got five legs'. We all sort of stood up and had a bit of a look and sure enough it did," he said.

While all families have their black sheep, Mr Kuerschner said this particular lamb was a little more conspicuous than most.

"I was surprised, I suppose. Intrigued more than shocked," he said.

Polymelia is a rare, but not unheard of, congenital condition in which animals — and sometimes humans — are born with extra limbs.

Last year, a five-legged lamb generated headlines after it was found on a farm in the southern Western Australian town of Kojonup, with veterinary authorities saying the "sporadic individual genetic defect" was unlikely to be a hereditary trait.

Perth-based sheep vet Paul Nilon estimated the frequency in sheep might be as little as one in 200,000.

"The most common variation I've seen is where you have an additional foot and hoof growing out the side of the lower leg, but I have seen at least one growing from the head," he said.

He said that, depending on where it was located on the body, an extra limb was not necessarily distressing to the animal.

By his own estimation, Mr Kuerschner has shorn about 80,000 sheep in his time, and worked with thousands more, without once seeing an extra limb.

"It's a fully formed leg. There's bone and joints and it's even got a sort of hoof on the end of it, and seems to be attached to the sheep just through skin or flesh, rather than a bone joint," he said.

Unsurprisingly, it hasn't taken long for word to get around the local district.

"A few people have asked me about it, people are definitely asking questions," Mr Kuerschner said.

"I was speaking to a pastoralist who's run thousands and thousands of sheep for 30 years and he's never seen anything like it, so it's definitely an anomaly.

"It seemed completely happy and healthy and didn't seem to be suffering any kind of medical issue."

Mr Kuerschner said the extra leg sprouting from the back of the sheep's head resembled a dubious haircut — and that he was tempted to name the sheep after the Western Bulldogs AFL player who had brought the mullet to renewed prominence.

"It hangs out from the back of the head, hanging backwards, not forwards, and sort of hangs loose and limply and flops around as it runs around," he said.

One complication with that designation is that the lamb is a ewe, not a ram, and Mr Kuerschner said he could see no reason "why it can't have lambs of its own".

In the meantime, Mr Kuerschner said his intention was to treat the creature not as a curiosity but as a pet.

"When the time comes to wean it off its mother, I think I'll take it home and it can run around the house yard. I've got three little kids and they'll be fascinated to have that as a bit of a special pet for hopefully the rest of its life," he said.

"I don't think we'll be charging people to come and have a look at it."