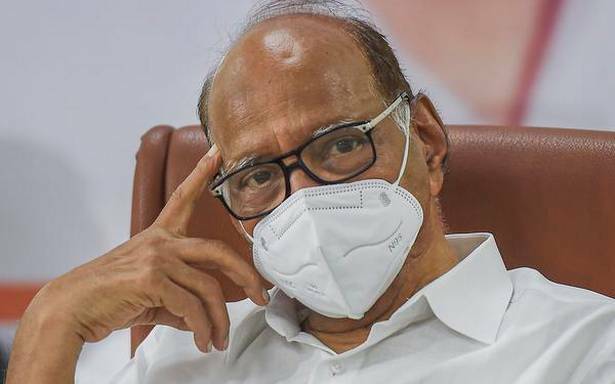 During the meeting that lasted for about an hour, Mr. Pawar handed over a cheque of ₹2.36 lakh for the Chief Minister’s relief fund on behalf of the Rayat Shikshan Sanstha, a renowned educational institute.

The meeting sparked off speculation about the issues the two leaders, who are part of the ruling Maha Vikas Aghadi (MVA) coalition, might have discussed.

Maharashtra Chief Secretary Sitaram Kunte was also present during the meeting. Mr. Pawar did not speak to the media while leaving.

“As chairman of Rayat Shikshan Sanstha, I handed over a cheque worth ₹2.36 lakh to CM Uddhav Thackeray for the CM relief fund. The fund is raised as one day salary by all the teachers and non-teaching staff of the Sanstha,” the NCP chief tweeted later.

“I hope the fund would be helpful for the State’s ongoing measures to bring down COVID-19 cases,” he said.

They could have also discussed the issue of appointment of 12 members to the Legislative Council from the Governor’s quota, an NCP source said. Governor B. S. Koshyari and the Shiv Sena-NCP-Congress government are at loggerheads over the pending appointments.