Shamima Begum GMB interview: What did she say and how have people reacted to former ISIS bride’s pleas? 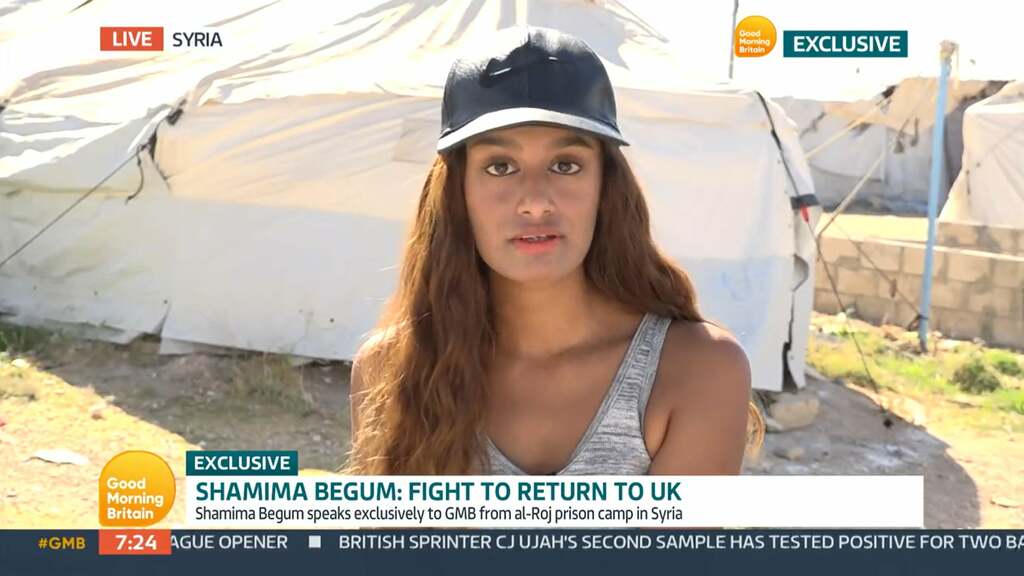 Former ISIS bride Shamima Begum appeared on Good Morning Britain today to beg for forgiveness from the British public and said she would “rather die than go back to ISIS”.

The 22-year-old, who had her British citizenship revoked by the Home Office over security concerns, appeared for her first-ever live broadcast interview from the camp in Syria where she is being detained.

Begum fled her east London home for Syria as a 15-year-old schoolgirl along with her friends Amira Abase, 15, and Kadiza Sultana, 16.

EXCLUSIVE: 'Are you a terrorist?' - @susannareid100

Former ISIS bride Shamima Begum thought she was 'doing the right thing as a Muslim' by joining ISIS and she 'did not want to hurt anyone'.

Here are the key points from her interview with Susanna Reid and Richard Madeley:

Begum wants to ‘prove her innocence’

Begum told GMB there was “no evidence” that she was a key player in preparing terrorist acts.

She said wanted to be brought back to the UK and face terror charges in order to prove her innocence.

“I am willing to go to court and face the people who made these claims and refute these claims, because I know I did nothing in IS (so-called Islamic State) but be a mother and a wife,” she said.

“These claims are being made to make me look worse because the Government do not have anything on me.

“There is no evidence because nothing ever happened.”

She says she regrets her comments on the Manchester Arena bombing

Begum had previously compared the 2017 Manchester Arena bombing – in which 22 men, women and children died after homegrown jihadi Salman Abedi detonated a suicide bomb – to military strikes on IS strongholds, calling the terror attack “retaliation”.

Begum apologised for these comments today and told hosts Reid and Madeley: “I am completely sorry for anyone who has been affected by ISIS, I in no way agree with what they did. I’m not trying to justify what they did, it’s not justifiable to kill innocent people in the name of religion.”

EXCLUSIVE: @susannareid100 questions Shamima Begum on how she can seek forgiveness after her comments on the Manchester Arena terrorist attack.

In 2019 Ms Begum said the Manchester Arena attack was “justified” because of airstrikes that killed civilians in Syria. pic.twitter.com/WO8nGp60uP

EXCLUSIVE: 'Why should we forgive you?' - @richardm56

Shamima Begum asks for the British public to 'forgive' her and says she sympathises with people because she has 'lived in fear of ISIS and lost loved ones because of ISIS.' pic.twitter.com/8YRNtNPear

“But for those who have even a drop of mercy and compassion and empathy in their hearts, I tell you from the bottom of my heart that I regret every, every decision I’ve made since I stepped into Syria and I will live with it for the rest of my life.”

She added: “No one can hate me more than I hate myself for what I’ve done and all I can say is I’m sorry and just give me a second chance.”

In a direct plea to Prime Minister Boris Johnson, Begum said: “I think I could very much help you in your fight against terrorism because you clearly don’t know what you’re doing.”

She added: “I want them [the British public] to see me as an asset rather than a threat to them.”

EXCLUSIVE: ‘I think I could very much help you in your fight against terrorism because you clearly don’t know what you’re doing.’

Shamima Begum makes a plea to Boris Johnson to let her return to the UK. pic.twitter.com/8XAIsCofhy

When asked what she would tell Sajid Javid, who was Home Secretary when Begum’s British citizenship was revoked, Begum said: “I understand why he took my citizenship away, that it’s his job to think about the interest of the UK before anything else.

“What he saw on the media was not the true me. If he were to meet me himself, I’m pretty sure he would change his mind about my citizenship.”

Begum said she was groomed and taken advantage of, believing she would be entering an “Islamic paradise”.

She said: “People that I was speaking to online they just, they created this image for me over paradise, an Islamic paradise.

How have people reacted?

Sajid Javid, who was Home Secretary when Begum’s British citizenship was revoked, told ITV: “I’m clear that it was absolutely the right decision to protect the British people.”

'The decision is both morally and legally correct and the right one to protect the British people.'

Sajid Javid was Home Secretary when he made the decision to revoke Shamima Begum's British citizenship. He says that was 'absolutely the right decision'. pic.twitter.com/vDaIu2FuUI

He also hit back at Begum’s claims that she played no part in Islamic State terrorism.

Referring to his decision while home secretary to strip Begum of her British citizenship, the Health Secretary said: “I won’t go into details of the case, but what I will say is that you certainly haven’t seen what I saw.”

He added: “If you did know what I knew, because you are sensible, responsible people, you would have made exactly the same decision – of that I have no doubt.”

Viewers took to Twitter to voice their opinions on Begum’s fate.

Some believe she was should be brought back to the UK to face the consequences of joining the terror organisation:

Shamima Begum is British and our mess.

Crimes she’s committed should be investigated/prosecuted/punishable in UK

We have worse criminals & mass murderers, terrorists etc in our prisons whose citizenship have not been revoked

Your hate should have no bearing on her citizenship

Shamima Begum was a London schoolgirl when she was groomed by fanatics who’d be prosecuted if they did it in Britain.

Bring her home, investigate, punish if appropriate then use her to stop others falling under the spell of extremists. https://t.co/gbQcRuzkyU

Shamima Begum IS British, like it or not. The UK chose letting innocent children die over acknowledging this fact. This country’s ability to avoid owning up to its actions is truly dumbfounding.

Shamima Begum was a child when she was groomed. She’s British. It really is as simple as that.

I see Shamima Begum is trending as she is being interviewed by GMB.

Things to remember, Shamima is a victim of child exploitation!

Some might not want to acknowledge it, but it’s a fact.

She was a 15 year old child when groomed by extremists.

Others said she should “never be allowed back” to the UK:

Just as well I’m not interviewing this lying, snivelling, cold-hearted, self-serving ISIS bride monster or I’d have seriously lost my temper by now. Begum should never be allowed back to Britain.
Let her rot in the terror bed she made for herself. pic.twitter.com/ao5BRTVFA2

You’re humanising a monster. The moment she joined ISIS she forfeited her right to a life in Britain https://t.co/HYZKN3GpA0

Omfg why are @GMB interviewing shamima begum. We don’t want her, she committed treason, said the Manchester attack was justified and had no remorse

Shame on you for giving her airtime

I do not forgive Shamima Begum

I will never forgive Shamima Begum

Let her rot where is

Shame on #GMB giving airtime to Shamima Begum. She made her bed let her lie in it.

Others said they are “on the fence”:

Completely on the fence over Shamima Begum. Don’t get me wrong, I don’t think she should be allowed back to the UK, but I do believe she’s probably remorseful for her actions. The way people talk about her is like she was the head of ISIS. #GMB #GoodMorningBritain pic.twitter.com/MdjuxMXdNr

Gabby Petito: Who is she and what do we know about her disappearance?