EDMONTON, Alberta — The pandemic shifted one of Canada’s long-standing holiday rituals, the World Junior Championship, from December to the middle of summer. But even allowing for that, the absence of a crowd before the Canadian team’s first game this week was striking.

In a fan zone with sprawling television screens outside of the NHL arena in downtown Edmonton, a DJ entertained a group that never surpassed a dozen people in the hour before Canada took on Latvia in its first game. Up a long escalator, the number of open gates into Rogers Place often exceeded the number of people passing through them. And once inside, a preponderance of empty seats allowed the chants of eight enthusiastic Latvian supporters to be heard by all.

In a country that many claim is defined by hockey, there have traditionally been three mandatory rituals for fans: the Stanley Cup Final, men’s and women’s Olympic hockey and the men’s world juniors. Several of the spectators who did show up for Canada’s opening game said its transformation into a shadow of a tournament was only partly explained by its unseasonal rescheduling. In May, TSN, a sports television network, reported that Hockey Canada, the national governing body, paid 3.5 million Canadian dollars to settle a lawsuit by a woman who accused eight members of the world junior team of sexually assaulting her in 2018.

Matters only got worse. Hockey Canada acknowledged that the money came from a slush fund generated from hockey registration fees, including those for children. The fund, it also said, had been used to pay another CA$7.6 million to settle nine sexual assault and sexual abuse claims since 1989. It then emerged that there were further allegations of sexual assault involving another national junior team in 2003.

While shocking, they are far from the first reports of sexual assault and abuse by and against hockey players. But the current scandal appears to have shaken the faith that some Canadians have in a sport that is almost as much an obsession as a national pastime.

Just outside the largely empty entrance gates, Jen Rutledge, a civil engineer with the City of Edmonton and an Edmonton Oilers season-ticket holder, said she was using the ticket purchased long ago only because a cousin visiting from England wanted to catch a game.

“I’m a bit conflicted, honestly, about me even attending this tournament,” she said. “To hear about player fees being paid into a fund that goes toward silencing victims of some of these teams is really quite concerning. Hockey is an important part of Canadian culture. But, at the same time, there have been a lot of atrocities done by this organization.”

Rutledge is not alone in her dismay and anger. All of Hockey Canada’s corporate sponsors, which include one of the country’s largest banks and the ubiquitous Tim Hortons coffee and doughnut chain, have abandoned it, leaving the arena free of the usual advertising on the ice and rink boards. Edmonton’s tourism board is no longer promoting the tournament, and the federal government has also cut off its funding to Hockey Canada and ordered an audit to make sure that its funds were not used to silence victims while lawmakers in Ottawa hold hearings. Police have also resumed investigating the events of 2018. As the story began to dominate the news, Prime Minister Justin Trudeau called for a “real reckoning” at Hockey Canada and condemned its leaders for their “willful blindness.”

All this comes at a time when participation and interest in hockey in an increasingly ethnically and racially diverse Canada have been ebbing in favor of soccer, basketball and other less costly and more global sports.

Many of the sport’s longtime critics say it’s time for Canadians to accept that the sport that has come to define their nation — accurately or not — is ingrained with misogyny, violence, racism and homophobia.

“It’s like Hollywood and the casting couch,” said Greg Gilhooly, a corporate lawyer who was sexually abused by Graham James, a junior hockey coach who was a notorious sexual predator. “People knew for years, decades, that the casting couch was very much a part of the production of content in Hollywood. And yet, it took a grotesque violation of trust for people to say: ‘Enough is enough.’ My hope is that there’s finally going to be a reckoning here.”

Exactly why the current revelations have begun to turn the national game into a nation’s shame in a way that a string of previous ones did not is not entirely clear.

In 1997, in the most high-profile case, Sheldon Kennedy, a former NHL player, accused James of sexually abusing him over five years when he was a teenager playing junior hockey for James. Since then, James, who was named Man of the Year by The Hockey News in 1989 (though he was stripped of the honor in 2013), has been twice convicted, served time in prison and also faced charges on a third occasion.

In addition, multiple junior players have been convicted on charges related to sexual misconduct, spared jail time and then signed by NHL teams. In 2021, the Montreal Canadiens drafted a junior player who had shared with teammates photos of his consensual sexual encounter with a woman and was convicted and fined by a court in Sweden.

Brock McGillis, a former player in the Ontario Hockey League who was the first professional hockey player to come out as gay, said he believed that the use of registration fees to pay off victims had been taken as particularly egregious. (Hockey Canada officials told Parliament that the money mostly went to victims of James.)

“In the past, people were defensive because their sibling, child or their husband or wife, somebody was involved in the sport,” McGillis said. “So people felt that it was an attack on their identity. But when you find out that your dollars are being used to silence victims of sexual assault and to pay for crimes and mistakes of others, now you feel culpable.”

Critics of hockey have long argued that the system for developing players in the country and the national idolizing of young men have created a culture of entitlement and hero worship that has served as an incubator for bad behavior.

In the 2018 case, in which all the names have been sealed by a court, a woman said in a court filing that she had been repeatedly sexually abused in a hotel room in London, Ontario, by eight members of the national junior team after a Hockey Canada fundraising golf game and dinner.

Like players on the current team, most had been streamed into the sport’s elite channel by elementary school. By 16, they had moved away from home to play junior hockey in small towns, billeting with local families and becoming local celebrities. From there, they moved onto college or other minor leagues or were drafted by NHL teams. All the while, their only community was their hockey community.

“There’s a lot of privilege to say or do whatever you want without any ramifications or questions that comes with that,” McGillis said. “You can say racist, sexist, homophobic things without any real consequences.”

And Gilhooly said that fans shared the blame.

“This is one of these situations where people are put on pedestals, and they’re allowed to get away with things,” he said. “It’ll be resolved only when society gets up in arms and teaches young men that just because you can, doesn’t mean you should.”

On top of that is a fractured system overseeing hockey in Canada. Hockey Canada’s authority is mostly limited to national and international events and teams. Most of the responsibility for organizing and running the sport is divided among 10 provincial governing bodies and a variety of leagues.

“Everybody’s kind of running their own autonomous show,” said Courtney Szto, an assistant professor of kinesiology at Queen’s University in Kingston, Ontario. “So we find ourselves now in a situation where it’s quite easy for people to say: Well, that’s someone else’s responsibility. There’s a lot of finger pointing.”

But Hockey Canada’s authority over the junior men’s national team is supreme. And so far, its board of directors continues to resist widespread calls to resign although its chairman did resign a few months early and was replaced by Andrea Skinner, a director, lawyer and the first woman in the position, on an interim basis.

Hockey Canada’s board has hired a former Supreme Court of Canada justice to review how it is governed and operated and a law firm to examine the 2018 assault. But Gilhooly said that without complete autonomy, no investigation was likely to be credible. He also wants Hockey Canada to suspend all national team programs until the current mess is resolved.

After Canada’s first game finished with the junior team’s first win, Dave and Lynette Jordan sat on a bench outside the arena and pulled soft drinks out of a small cooler. The couple had made the two-day drive from Virden, Manitoba, to attend their 14th world junior tournament.

They’ve long billeted players for the Virden Oil Capitals, including some that Dave Jordan said he believed had been abused by James.

While the most recent revelation wasn’t enough for them to consider staying home, Jordan said that he was nevertheless distressed about the state of hockey.

“Hockey Canada has got to get themselves straightened out, but you have to honor and watch players who go out there and give their all,” he said. “It’s going to be a major shake up, and hockey’s going to have to figure out how to survive this.” 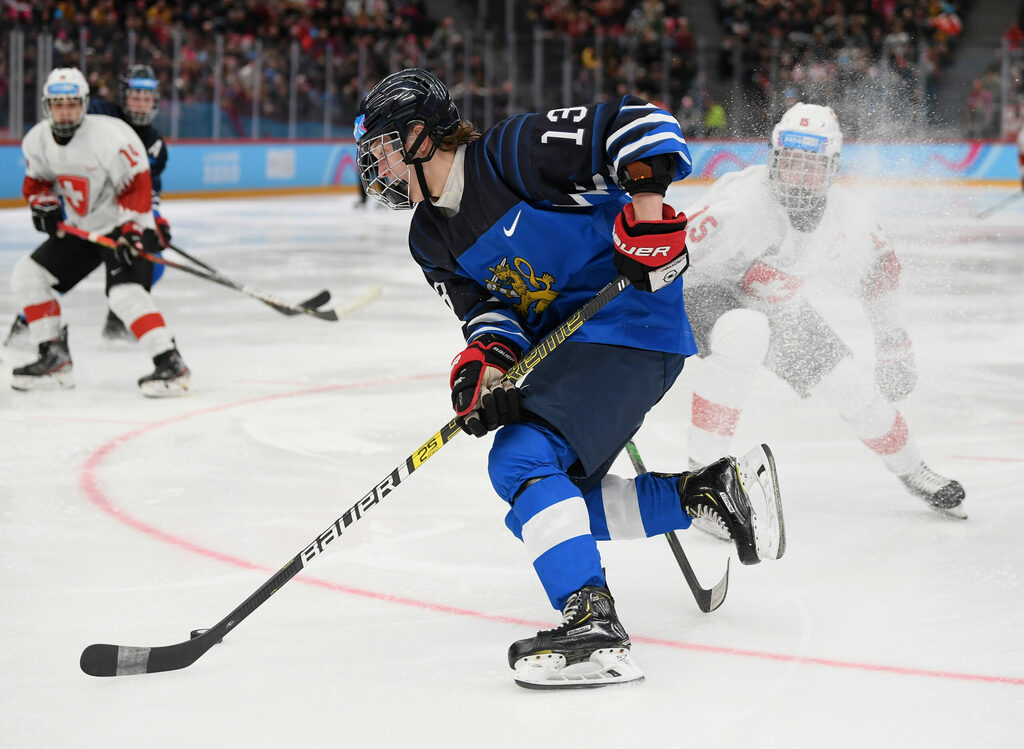 USA Today Sports Media Group
From analysis to the latest developments in health, read the most diverse news in one place.
Hockey Australia Country Challenge attracts teams from across the country to Albany

ABC News
Janneke Schopman's hands-on approach has bought the best out of me: Jyoti

Hunter, now sporting a new title, handles a dizzying array of duties — from managing the salary cap to assisting…

Chicago Sun-Times
One place to find news on any topic, from hundreds of sites.
The journey of a nation in sport

For all the promise of a better sporting tomorrow, the past reminds India of much that was precious and which…