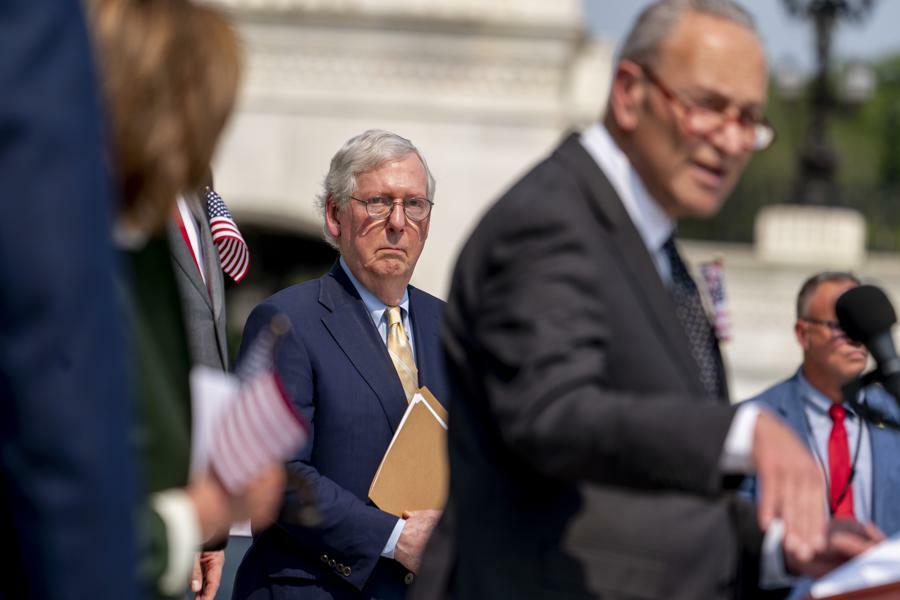 Weeks of partisan strife over raising the debt ceiling came to a momentary end Thursday night, with the U.S. Senate voting to approve a temporary increase days before a potentially catastrophic debt default, but Republicans and Democrats appear set for another standoff if they can't agree on a long-term solution soon.

The Senate voted 50-48 to approve the measure that will allow the federal government to keep paying its debts until at least December 3.

The bill authorizes a $480 billion increase to the debt limit, with Democrats and Republican leadership agreeing the federal government will maintain current spending levels through early December.

Senate Majority Leader Chuck Schumer (D-N.Y.) announced Thursday morning that Democrats had agreed to a deal offered by Senate Minority Leader Mitch McConnell (R-Ky.) on Wednesday to raise the debt ceiling, which McConnell said would give Democrats more time to pass a long-term plan on their own.

Democrats have consistently said they want a bipartisan agreement on raising the debt ceiling, since both Republican and Democratic administrations have heavily contributed to the debt.

McConnell insists the GOP will only engage in a "traditional bipartisan" conversation to raise the limit if Democrats agree to significantly cut their proposed $3.5 trillion spending package—otherwise, he says, Democrats must pass a long-term increase to the debt ceiling through the complicated and lengthy budget reconciliation process.

Treasury Secretary Janet Yellen had warned of a "catastrophic" debt default by October 18 if Congress didn't act to raise the debt ceiling, which would have been the first default in U.S. history, and could have cut off funding for critical programs like Social Security and Medicare.

If Democrats do not budge from their position against using reconciliation and Republicans refuse to offer support to raise the limit through traditional legislation, another stalemate later in the year appears inevitable.

“What is needed now is a long-term solution so we don't go through this risky drama every few months,” Schumer said Thursday. “This is a temporary but necessary and important fix.”

Republicans in the Senate blocked two Democratic efforts to raise the debt ceiling last week, with McConnell saying he wanted to keep Democrats from moving forward on the $3.5 trillion spending package. But passing a bill that large seems impossible in any case, since centrist senators Joe Manchin (D-W.Va.) and Kyrsten Sinema (D-Ariz.) have said the bill is far too expensive. President Joe Biden has suggested a deal with the centrist senators could be reached on a trimmed-down bill of $1.9 trillion to $2.2 trillion. Democrats are planning to pass the bill through the budget reconciliation process, which doesn’t need Republican support, but does require the backing of all 50 Senate Democrats.