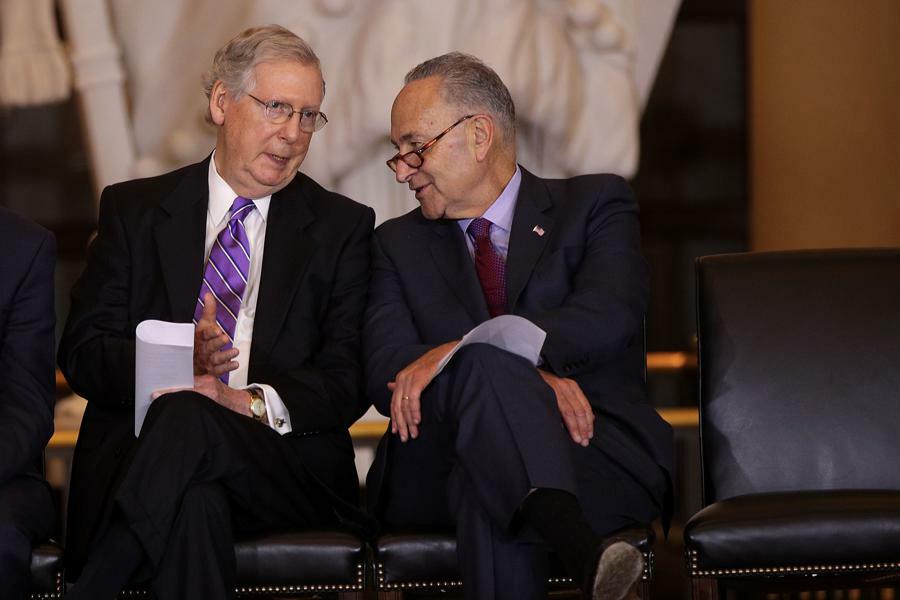 Senate Republicans and Democrats have agreed to move forward with a plan to keep the U.S. from defaulting on its debt until at least early December, Senate Majority Leader Chuck Schumer (D-N.Y.) said Thursday morning, ending a lengthy stalemate ahead of a potential economic disaster.

Democrats agreed to an offer from Senate Minority Leader Mitch McConnell (R-Ky.) for a lifting of the debt ceiling sufficient to maintain current spending levels for a short period.

McConnell insists Democrats pass a long-term raise to the debt ceiling through the budget reconciliation process—a complex and lengthy undertaking that won't require any Republican support.

In a statement on Wednesday, McConnell said the only way Republicans would engage in a "traditional bipartisan" conversation would be if Democrats slash their proposed $3.5 trillion spending package.

Treasury Secretary Janet Yellen said if the debt ceiling isn't raised by October 18, the U.S. will default on its debts for the first time in history, leading to "catastrophic" economic impacts.

“It's our hope that we can get this done as early as today,” Schumer said of a vote on the agreement.

McConnell has said Democrats should act alone on raising the debt ceiling since they control both chambers of Congress and the White House. But before McConnell's offer, Democrats had essentially cut off their options for acting without Republican support. Trying to raise the debt ceiling through the budget reconciliation process would have been essentially impossible to accomplish before the October 18 deadline, Schumer said. Democrats could also eliminate the filibuster when it comes to votes on raising the debt ceiling—an idea President Joe Biden floated Tuesday. But doing so would require the support of every Senate Democrat, and centrist Joe Manchin of West Virginia has already said he won't support dropping the filibuster.

Democrats in Congress are also juggling the $3.5 trillion spending package and a $1.2 trillion infrastructure bill, which are being held up by a standoff between centrist Democrats in the Senate and progressive Democrats in the House. House progressives have vowed to withhold support for the infrastructure bill, which has already passed the Senate, unless it’s accompanied by a vote to pass the social spending package, which centrist senators like Manchin and Arizona's Kyrsten Sinema have said they oppose. Democrats are seeking to pass the $3.5 trillion legislation in the Senate through the reconciliation process, since it has no Republican support, but the 50-50 split between parties in the chamber means the bill wouldn't pass if even a single Democrat voted against it. Manchin has set a cap of $1.5 trillion in spending for the bill. President Joe Biden said he believes he can reach a deal with the senators on a more expensive package, in the range of $1.9 trillion to $2.2 trillion.

It's A 'Gimmick': Yellen Opposes Minting $1 Trillion Coin To Save The United States From Historic Debt Default (Forbes)