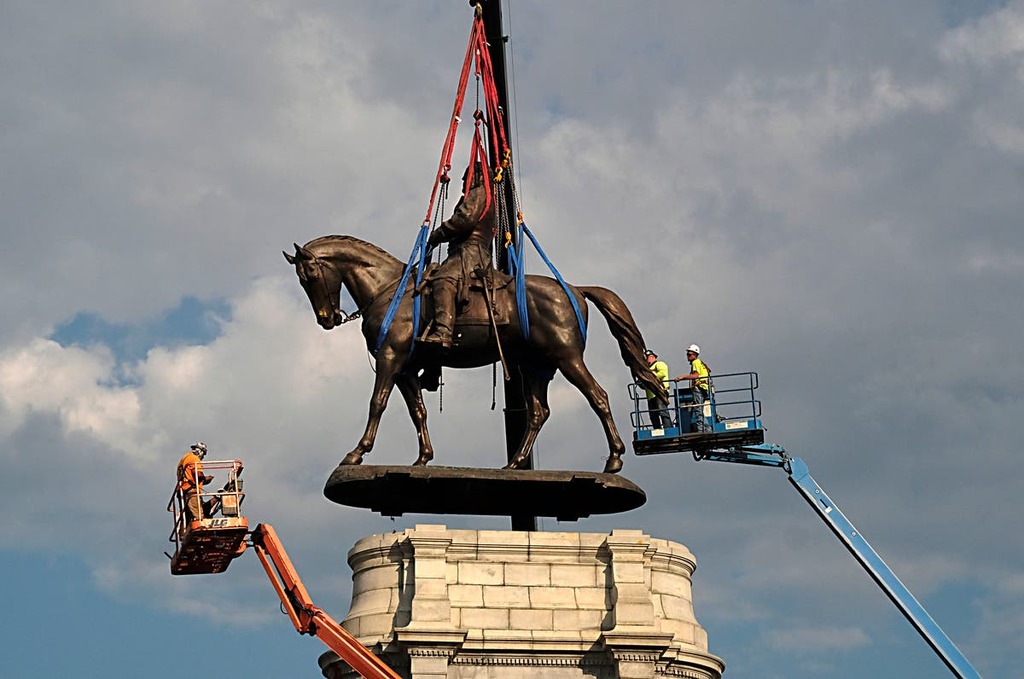 The search for a 134-year-old time capsule officials believe is buried inside a controversial statue of Confederate General Robert E Lee has been called off.

Workers spent a day digging through the removed statue’s giant granite pedestal to try and locate the 1887 time capsule, but were unsuccessful in finding it.

Now the large pedestal pieces of the statue in Richmond, Virginia, will be reassembled with its whereabouts still unknown.

The statue of Lee sat astride a horse was taken down on Wednesday, more than a year after Governor Ralph Northam ordered its removal in the wake of protests following the police killing of George Floyd.

After the statue was taken away, crews used ground-penetrating radar devices, a metal detector and other construction equipment to try to locate the copper time capsule inside the 40ft tall pedestal.

Now the state intends on placing a 2021 time capsule, which will include an expired vial of the Pfizer Covid-19 vaccine, a Black Lives Matter sticker and a photograph of a Black ballerina with her fist raised near the statue last year.

State officials say they will leave the pedestal in place until the Richmond community has taken part in a re-think of the city’s famed Monument Avenue.

The Lee statue was one of five Confederate monuments along the road, and the only one owned by the state.

Its removal had been blocked by lawsuits until the Supreme Court of Virginia ruled last week that it could be taken down.

All four of the city-owned statues were removed last summer.

An 1887 newspaper article suggests the original time capsule contained Civil War memorabilia and a “picture of Lincoln lying in his coffin.”

Governor Northam’s chief of staff, Clark Mercer, confirmed it is doubtful workers would spend any more time looking for the capsule.

“It’s disappointing not to find the time capsule,” he said.

“We looked where we thought it was. It doesn’t preclude (us) in the future from finding it, but for right now, the mystery will continue.”