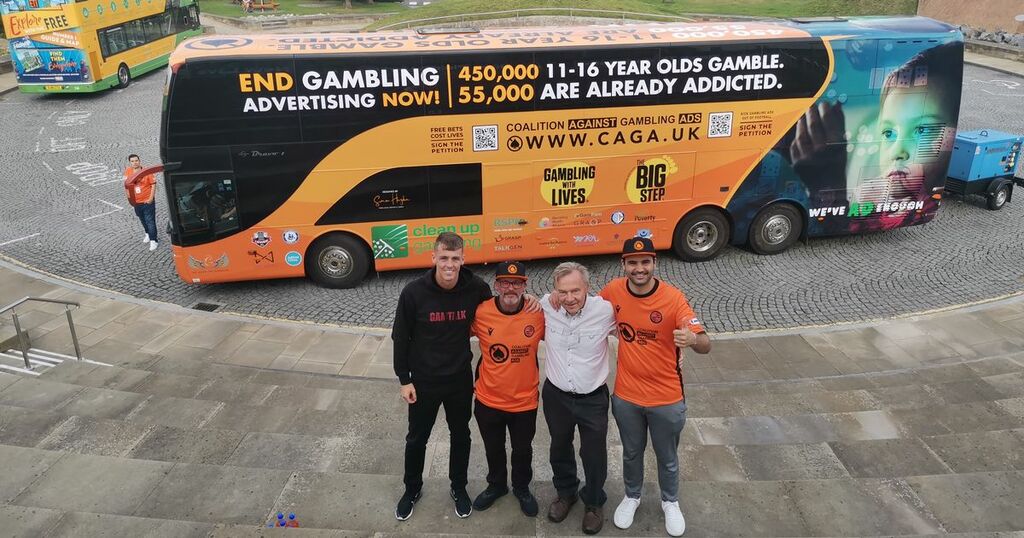 A Scottish campaigner, who visited Edinburgh as part of a charity campaign, says he became addicted to gambling after winning £1,000 on his first night at a casino.

The Coalition Against Gambling Ads (CAGA) are on a Britain-wide tour that aims to raise awareness of the devastating impacts that gambling advertising can have on children and adults.

The aim is to have legislators revisit the 2005 Gambling Act, which they say is no longer fit for purpose in the online world of today.

On Wednesday, the chairman of the Scottish Football Supporters Association, Andy Smith and the owner of GamTalk, Paul Pettigrew, amongst many others, chatted about their campaign.

Paul was himself a problem gambler in his later teen years after becoming hooked when winning £1,000 off £100 during his first trip to the casino aged 18.

He had recently left school and had been released from a professional contract at Greenock Morton FC when he discovered that gambling could fill the void that had been recently created.

The former youth footballer admits that he came from a non-gambling family so had entered the industry with his eyes shut.

But over a period of years he lost over £100,000 whilst destroying relationships with friends and family.

Thankfully he was able to recover. And when he did, he started planning an organisation that would allow him to share his lived experience with young people who may find themselves in the same position in the near future.

As a result he set up a third sector agency that looks to prevent young people from becoming involved in gambling by doing talks in schools, youth clubs and football teams.

On the formation of GamTalk and the importance of their work as well as the campaign, Paul said: “For me the most consistent feedback I get is that I’m relatable. I do not go in with suit and tie and bullet points but instead I say to the kids that they are not as far away from the problem as they think.

“There is an importance in early intervention where you can warn youngsters about the signs and about opening up when things become too much. One bad decision can lead to several and I know this from personal experience. I want people to avoid the mistakes I made as my life ended up as a car crash.

“I started gambling at age 18 and after having a successful first trip to the casino I ended up winning around £8/9,000 which made me feel invincible and as if gambling was something that I was good at.

“I’d just left school and had been released as a professional by Morton and I used the gambling to fill the void. But the handbrake came off for me and within a matter of a year I was around £35,000 in debt to various payday loan companies and family members. There was a real strain on relationships as I robbed Peter to pay Paul in many ways.

“But what rescued me was starting GamTalk a few years ago and launching at the end of last year. My dad helped me to get focused but after that I was spending eleven to twelve hours a day trying to figure out presentations and how I could get into youth settings to teach young people about the dangers. It was huge for me that I was occupied in the beginning.

“The issue for people is that gambling is a massive part of Scottish football culture and that has been created by the gambling industry.

“I did an exercise with the young people who were aged around 15/16 and asked them in their class to name as many gambling companies as they could. To my horror one group came back with 13 or 14 and to be honest I would struggle to come up with that off the top of my head.

“But it shows how widespread the sponsorship is. From Youtube to the two biggest clubs in Scotland having gambling companies on their shirts.

“It has been extremely eye opening with just how young people can be sucked into the industry and how little it is ever spoken about. They don’t really know anything about it. At school they are taught the dangers of smoking, drugs and drinking but not gambling and we have to change that.”

Andy Smith, who is the chairman of the Scottish Football Supporters Association, also took part in the campaign event today at Dynamic Earth.

He says that football fans do not want to ban betting but instead they want it to be controlled so that they are not under siege from betting companies 24/7.

On the issue of gambling in football and the wider campaign as a whole, he said: “We do not want to see betting stopped but we are under siege from an algorithm money making industry that normalises behaviour that is not normal.

“Betting has become a pandemic that is hidden. At the moment we have a huge number of kids actively watching football live and everyone knows that people only really want to consume the product live. Gambling companies have tapped into this and are exploiting and normalising the behaviour amongst fans and even our young people. The aim is to exploit vulnerable members of society.

“It is no longer about betting on a game anymore. Once they have you on football they will have you on slots and online casinos next. It is conditioning people who are susceptible to these forms of addiction and getting them hooked.

“In the old days grounds would have a bookie by the ground and the football pools were an institution. But when you look back you were picking the results for 8+ matches, which is skill driven at the community level and only costs you around a pound. You cannot compare football pools with the algorithm driven industry that we see today.

“As the situation stands one Scots teenager every week commits suicide because of gambling, our two biggest clubs have sponsorships and we can't blame them as they will want the money being offered. What we need to see is a change to the 2005 Gambling Act which is not fit for purpose for the modern super industry that exists.

“We need an up to date legislation as well as a vision from the game itself across the multiple governing bodies. We need FA’s and clubs to say we will not have a sponsor that harms our fans and this is exactly what gambling can do. At the end of the day the industry is already killing our kids.”

Matt Zarb-Cousin, who is the director of CAGA, said: “We are travelling around the UK in a double-decker tour bus wrapped in branding and provocative images. This bus will transport representatives from member organisations to governing bodies and places of interest in Wales, Scotland and England, where they will make peaceful and meaningful engagements with authorities, as well as the public, to support the campaign to end all gambling advertising, promotion and sponsorship.

“They’re joined by people harmed by gambling who are happy to share their stories and explain the importance of a gambling ad-free country, including the positive mental health impact this will have on both adults and children.

“The hope is to engage regional and national media outlets like Edinburgh Live to document our visits in what will be the weeks leading up to the widely anticipated government White Paper in response to its Gambling Act Review.

“So far in Scotland we have had a good response from MSP’s so we hope to build on this momentum as we travel on to Birmingham today.”