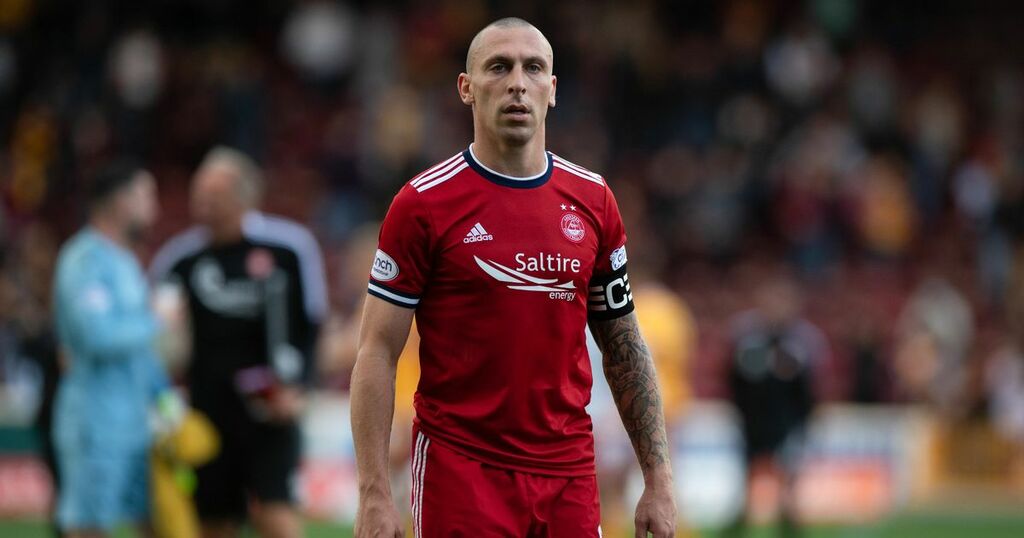 Scott Brown would walk out of the dressing room wanting to answer fans’ prayers only to be burdened with far too many questions of his own.

Now he’s happy he has a manager who refuses to leave anything to chance.

The 36-year-old midfielder has started to dip his toe into coaching as part of his hybrid role at Aberdeen and has been impressed with the job Stephen Glass and his team are doing.

The Dons earned plaudits for their European displays but their form has dipped, having exited the Europa Conference League and gone off the boil in the league.

Two points were dropped at home to Ross County and then at the weekend Brown and Co left Motherwell hurting from a 2-0 defeat.

They may be six games without a win but dejection won’t give way to disorganisation for the Dons skipper.

He knows the role of management has changed dramatically across his time in football. Brown said: “We used to have a manager who would come in and say same subs, same team and you just walked out.

“Then you would be out on the park and everyone would just decide what would happen. There was no set-plays or organisation. Now it’s in so much detail, especially Stephen as well. His background as well.

“It’s been good in the way football has changed and people like Pep Guardiola and Jose Mourinho coming over to Britain has definitely helped influence as well.

“It’s played in a more attractive way than it used to be. It used to be pinging the balls as long as you can and play the percentage game in the box.

“Now it’s about you trying to use the percentages of the ball to your favour and pull teams out of position.

“Once you pull them out of position you have to recognise that and have to build on that. It’s good that football is always going to improve.”

Brown has admitted for the first time that Aberdeen gave Ronny Deila’s Celtic a massive fright five years ago as he accepted that is the level his new team needs to get back to.

He was the Hoops skipper in 2015-16 as the Dons pushed them, sitting just three points behind the champions with 14 games to play.

It was enough of a scare for the Celtic board to replace Deila with Brendan Rodgers. Asked about that Aberdeen title push, Brown said: “It was a huge scare. They’re a great team, they really are, and coming up here it was always a hard game.”

Aberdeen were Celtic’s main challengers for four consecutive campaigns but that 2016 season is tinged with real regret for Derek McInnes and all his team – they knew Celtic were there for the taking.

That is the level of competition Brown wants to help Glass’ team replicate. Chairman Dave Cormack and his board have done everything they can, with the wage budget rising.

That has allowed Glass to bring in Christian Ramirez, Jay Emmanuel-Thomas, Brown, Declan Gallagher, Marley Watkins, Jack Gurr and David Bates, while there have been loan deals for Teddy Jenks and Austin Samuels.

Aberdeen entertain double cup winners St Johnstone next and Brown and his team know the importance of making Pittodrie a fortress.

He added: “That’s what we want to bring back – hard games back where we beat Rangers, beat Celtic, Hibs and Hearts, especially at home as well.

“We will try to make this place a fortress. Pittodrie should be a hard place to come, especially with the wind, rain, snow, sleet and sunshine as well.

“It is going to be a hard place to come to. We want to play attacking football and play with intensity.

“We also want to squeeze the game and force it, and get the crowd behind us. Hopefully in time we will be doing that.”

The 36-year-old knows long-term that coaching is a road he is keen to go down but he still has another two seasons left on the playing front.

Brown, whose move to the Granite City was first announced in March, said: “I’ve kept in touch with Stephen the whole time and it’s great to come in and actually work with him and not just speak on the phone.

“Especially in the last four, five weeks of the season, it’s not the same when you talk to someone about how training is going and how they’re preparing in training.

“To get in the building to work with Stephen, Allan Russell, Henry Apaloo, Simmy [Neil Simpson] and I know Gordon Marshall as well. I worked with him at Hibs when he was a goalie coach there.

“It’s great being able to batter ideas off people but also to see what we can do in training and what works.”