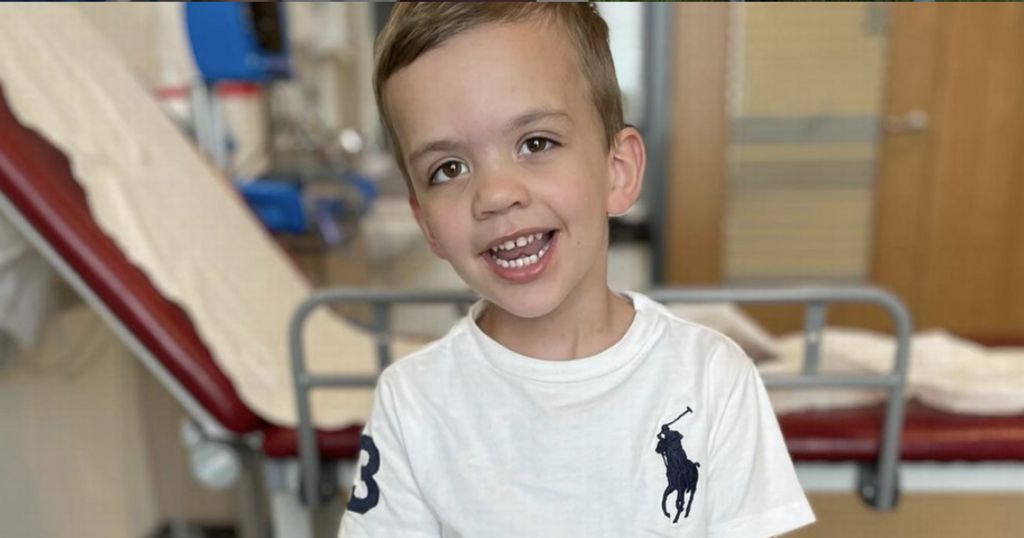 A Scots mum has told how her 'world fell apart' after 'coffee spots' found all over her son's body led to a life-threatening brain tumour.

Colette Cheape is urging parents to be on the look out after watching her brave son Odhrán go through 70 weeks of gruelling chemotherapy and multiple surgeries in just under four years.

The youngster was just a few months old when 'milky brown birth marks' started appearing across his body in late 2017.

After being taken to get them checked out, he was diagnosed with Neurofibromatosis type 1 (NF1); a genetic condition that, in serious cases, causes a range of conditions including tumours, body deformities, blindness and learning difficulties.

Worried parents, Colette, 33 and Richard, 35, were told his case was at that stage still mild, meaning his condition was stable for the time being but had to be closely monitored.

But in April 2020, Odhrán started struggling with bowel movements and extreme tiredness, which led to an MRI scan at Glasgow's Royal Hospital for Children.

Doctors then told Richard and Colette, from Kilsyth, the 'worst news imaginable'.

Odhrán had a brain tumour as a result of NF1 and to stand any chance of survival he urgently needed risky surgery to drain fluid the next day.

Colette, who's also mum to Aoife, 10, and one-year-old Una, told the Record: "When we were told the NF1 had resulted in a brain tumour our world fell apart.

"We were in lockdown where only Richard could stay in hospital with Odhrán, I felt so helpless.

"Doctors said he was, at that point, critically ill.

For the next year and a half the Cheapes painstakingly watched little Odhran fight off the condition.

His second surgery to 'debulk' the large tumour on the brain, one week after the drainage op, was incredibly daunting in itself.

Colette added: "There was a chance he'd not survive, come out blind or brain damaged, it was terrifying.

"But we had no other option.

The procedure successfully removed 88 per cent of the tumour and after a month-long recovery, where the toddler learned to walk again, Odhrán was reunited with his sisters at home.

But in late May 2020 medics discovered his tumour 'wasn't behaving' and put him on a 70-week course of chemotherapy, to eliminate the risk of it ever posing a danger again.

On September 23 this year, one day before his fourth birthday, Odhrán finished chemotherapy for good.

The Cheapes hosted a garden party to mark the special occasion where, surrounded by family and friends, the beaming youngster rang the bell to official mark the end of his treatment.

To say thank you to hospital staff, gran Marie Brady launched an GoFundMe page, which has so far raised over £9,000.

Almost all NF1 patients (95 per cent) will have six or more Cafe Au Lait marks on their skin.

She said: "We are so grateful to the children's hospital, we don't know where we'd be without them.

"Odhrán loving weekly hospital chemo visits is testament to them.

"With the Instragram, I wanted to get the word out there.

"NF1 is more common that Cystic Fibrosis yet not that many people know about it.

“We hope we can help to raise awareness of the signs of NF1 in order to help children receive early diagnosis and therefore the necessary specialist care.”

For more information on Neurofibromatosis visit the NHS website or the Childhood Tumour Trust who can be contacted via email at info@childhoodtumourtrust.org.uk.

You can donate to the Cheape family's Children's Hospital fundraiser through their official JustGiving page.