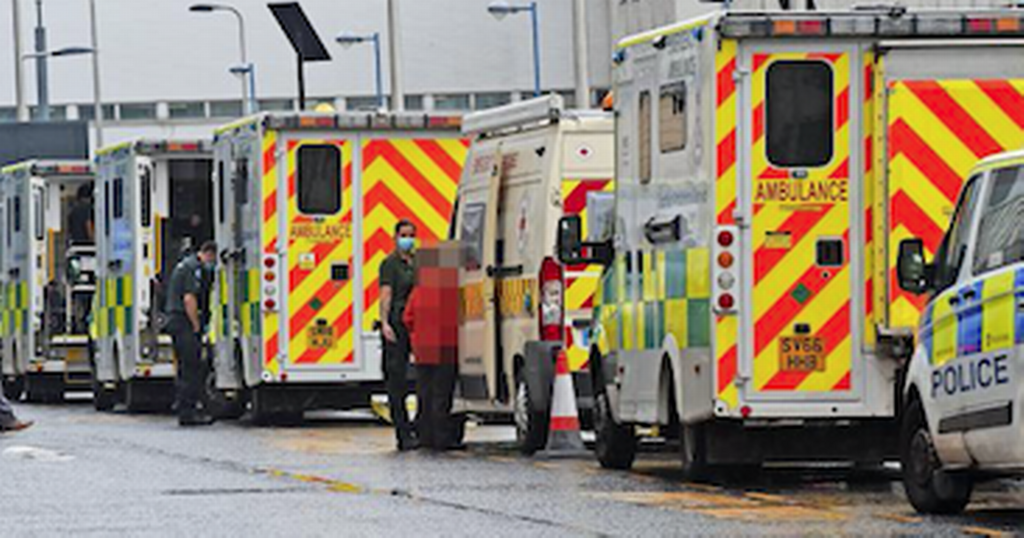 Scotland's ambulance crisis escalated yesterday with reports of huge queues outside three hospitals – and an OAP waiting 22 hours for a crew to reach them after a 999 call.

We revealed earlier this week that the service has seen waiting times soar in the past two weeks to an average of six hours, according to paramedics.

We also revealed Red Cross volunteers had been drafted in to assist paramedics and patients facing seven-hour waits outside the A&E ward at Glasgow’s Queen Elizabeth University Hospital (QEUH).

But despite assurances by Nicola Sturgeon that she would sort it out, the crisis showed no signs of improvement yesterday.

We received reports of 16 ambulances stacked up for up to four hours at QEUH.

At Royal Alexandra Hospital in Paisley, there were similar queues but with even longer waiting times.

Trade union Unite revealed how one crew arrived with a patient at 3.50pm on Thursday and didn’t manage to hand them over until 1.20am on Friday – a wait of nine-and-a-half hours and virtually a crew’s entire shift.

The wait meant at least four or five other call outs which they would have expected to attend faced lengthy waits.

The knock-on effect was being felt in Glasgow yesterday, where one 77-year-old man waited 22 hours for an ambulance.

His daughter said: “The ambulance arrived after a 22-hour-wait and he has been taken to hospital – possibly to sit outside for a long time but at least the experts have it in hand.

“I can only hope that the Government can be pressured to sort this before too many people suffer.”

And the problem is not confined to the Central Belt.

In Aberdeen, there were also ambulances stacking up in the early hours of Friday morning.

Last night, Jamie McNamee, Unite convener at the Scottish Ambulance Service said: “Unite is concerned the region is being deprived of valuable assets while they remain stacked at ARI with patients on board.

“This leaves the population vulnerable and exposed in the event of any emergencies arising in that area. Unite would ask that the SAS declare Major Incident Status at any receiving hospitals where patient handover exceeds 30 minutes.

“We would ask that full focus is put on the care and wellbeing of the population and that efforts are made to support crews in these difficult times.”

But a spokeswoman said: “Given the sustained pressures on the NHS, exacerbated by the Covid pandemic, we would advise patients to contact NHS24 on 111 to access the appropriate care and only call 999 if their condition is life-threatening.”

NHS Grampian said: “Ambulances having to wait at the front door is regrettable and we apologise to anyone who has been impacted by this.

“Our hospitals are currently facing sustained pressure from higher than usual admission numbers. In addition, at certain, points, we experience periods of exceptionally high demand at the emergency department.

“This can result in abnormally intense surges of patients arriving at hospital at the same time and can unfortunately lead to ambulances having to wait at the front door, as we’re unable to admit more patients to the department.

“During periods of intense pressure, cases are triaged as normal – with those facing life-threatening situations continuing to be admitted rapidly for life-saving treatment as an absolute priority.

“As with the rest of the hospital, the emergency department continues to be affected by the challenges created by Covid-19 as we strive to keep patients and staff safe.”

“We completely understand the daily demands and pressure staff are under and we are doing everything we can to support them through a range of health and wellbeing support measures.

“In addition, we are continuing to recruit and train new ambulance staff across the country at pace to provide additional capacity.”

First Minister Nicola Sturgeon claims Brexit has had a major impact on the NHS – creating staff shortages that have sparked the ambulance crisis.

Sturgeon was questioned yesterday about the growing problem of ambulance response times and patients queuing on trollies in corridors.

But she claimed Boris Johnson’s Brexit deal – as well as the pressures of Covid – had made it difficult for the NHS.

She said: “I think the health service is under more pressure than it has been under probably in any of our lifetimes.

“I have not experienced the health service under the pressure that it is under but we are living in a global pandemic.”

She said websites were full of headlines about ambulance waits in all parts of the UK and added it was “a significant challenge for health services everywhere”.

She continued: “That’s why we need to take the hard choices like vaccine certification to try to keep Covid under control but it is also why we need to invest in our health service.”

But she claimed: “We are seeing across our economy right now, but also in our public services, increasing staffing shortages because of Brexit.”

Labour’s health spokeswoman Jackie Baillie called her Brexit blame “shameless” and said her remarks were a “desperate bid to try to dodge her responsibility for Scotland’s NHS crisis”.

She added: “The problem with workforce planning and the lack of it dates to her time as Health Secretary when she reduced the number of training places. She started the process of reducing numbers.”