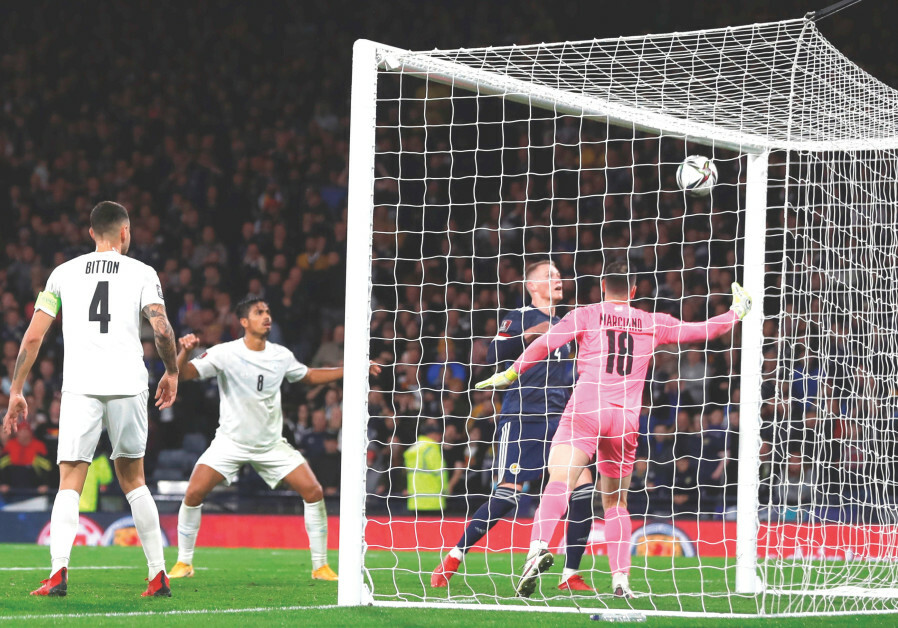 The Israel National Team fell to Scotland 3-2 on Saturday night in dramatic fashion on a late injury-time goal by Scott McTominay at Hampden Park in World Cup qualifying.

The defeat puts the blue-and-white in a very precarious situation to advance to playoffs as the Tartan Army remains in second place in Group F, now four points ahead of Israel with only three games remaining.

Israel had led 2-1 on goals by Eran Zahavi and Monas Dabbur after a stellar first half, but Lyndon Dykes drew Scotland even in the second half before McTominay broke the Sabra’s hearts with his added time goal to grab the points.

The blue-and-white will now get ready for Moldova back at home in Beersheba on Tuesday night as its looks to keep its slim hopes alive to find a way into the 2022 Qatar World Cup.

“We played very well in the first half,” said Israel head coach Willi Ruttensteiner following the disappointing result. “In the second half, the Scotland pressure decided the game. We couldn’t stand up to Scotland’s aggressiveness. If the game would have ended in the 92nd minute, we would have taken a point but the game continued and we lost. It’s a horrible feeling. The players gave everything they had until the final whistle.”

“I don’t have anything to say,” said Israel’s star striker. “We don’t know how to defend and when we go backwards, we give up a goal. We had to go forward. What surprised me is that is what the coach wanted us to do, play attacking football and hold onto the ball. We didn’t do what we were supposed to do.”

The Israel National Team entered the Scotland matchup after having won two of its last three World Cup qualifiers and in third place in Group F just behind the Tartan Army and Denmark, which was in first place.

For Steve Clarke’s squad, Liverpool defender Andy Robertson served as the captain, while Kieran Tierney from Arsenal and McTominay also played in the back as other English Premier League stars Che Adams, John McGinn and Dykes littered the lineup.

Israel got off to a dream start at Hampden Park as Zahavi curved an absolutely beautiful free kick over the Scotland wall to beat ’keeper Craig Gordon for his 32nd national team goal, drawing him even with Mordechai Spengler who had been in first place for the blue-and-white.

Following the goal, Zahavi silenced the crowd after it had booed the Israel national anthem, Hatikvah, prior to the start of the game.

Scotland tried to find a quick equalizer as an active Dykes made his way into the Israel box, but Marciano sent the ball out for a corner kick in the 15th minute.

However, a quarter-hour later, McGinn skipped by the Israel defense and into the area, from which he put the ball into the far corner and behind Marciano to draw the sides even at 1-1.

But Ruttensteiner’s players didn’t hang their heads for long as Natcho swung a free kick into the box that went off of a couple of Israeli players and right to striker Dabbur to put the ball home to retake the lead for Israel, 2-1 in the 31st minute.

Scotland went to work again and threatened the Israeli defenders as Natcho committed a foul just inside of the box to hand the hosts a penalty right before the halftime whistle. Dykes stepped up for the spot kick, but poorly sent it towards Marciano who made the save to keep the score at 201 for the Israelis heading into the break.

The hosts searched for a tying strike from the get-go of the second half and found it in the 57th minute when Dykes put the ball into the Israel goal, which was confirmed by the Virtual Assistant Referee (VAR).

Israel once again went to work as Solomon fed Zahavi a terrific ball in the box, but the latter’s header was caught cleanly by the Scottish keeper while Marciano did the same at the other end off of a Dykes attempt.

Ruttensteiner then made a number of substitutes bringing in Dan Glazer, Gadi Kinda and Shon Weissman for Natcho, Arad and Dabbur.

However, the changes didn’t help the squad in injury time as McGinn’s corner kick went to Jack Hendry in the box, whose attempt made its way to McTominay by the right corner of the goal who used his body to push the ball into the Israel goal as Scotland snatched the all-important win just before the final whistle was blown.