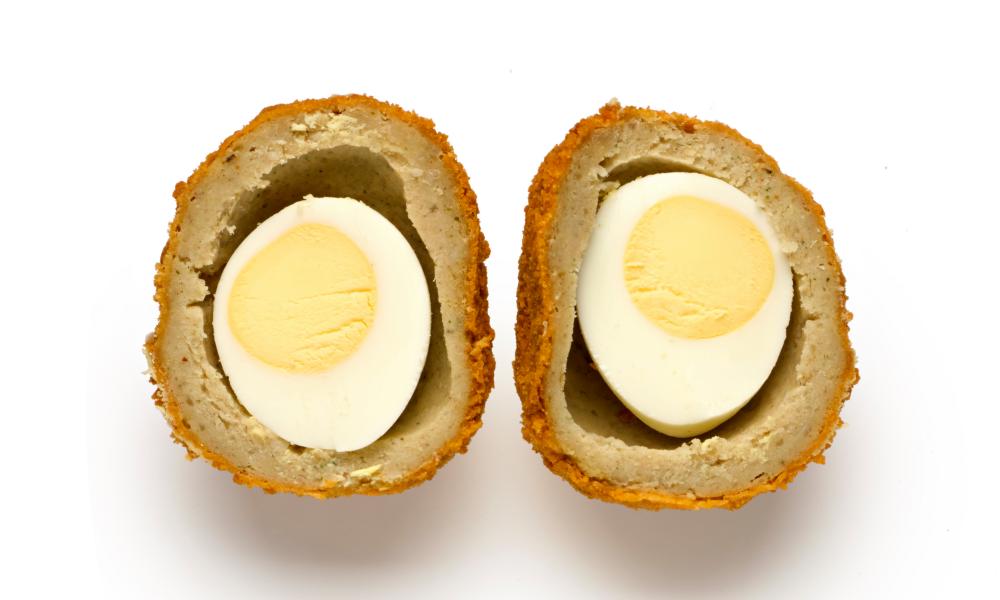 Leicester-based egg processing plant Just Egg hard boils and peels 1.5m eggs a week for snacks such as egg mayonnaise and Scotch eggs, creating mountains of shells to dispose of. It’s a dilemma the company’s owner, Pankaj Pancholi, has been keen to crack since he launched the business 14 years ago.

At home, eggshells can easily be composted or sprinkled on flower beds as a slug deterrent or soil enhancer. But for industrial egg producers, shells have to be disposed of in landfill because the waste egg attached to them rots quickly, causing a smelly by-product. It costs Pancholi around £50,000 a year to dispose of them, a significant sum for a company with a turnover of £4.2m last year.

In 2012, Pancholi teamed up with Prof Andy Abbott and scientists at Leicester University to find a cost-effective, sustainable way to recycle the shells.

Eggshell is made of calcium carbonate, like chalk, with a hard-wearing, crystalline structure. Since chalk is often used as a filler to reinforce plastic, Abbott hatched a plan to do the same with eggshell powder.

Abbott’s department set to work designing a plant to make this eggshell powder. Because Just Egg has to dispose of eggshells swiftly to avoid the rot, the eggshell processing plant was built as an extension to the existing factory, with the eggshells passing through on a conveyor belt to be processed.

The eggshells are chopped up with blades and washed and treated with a water-based solution to remove any remaining egg protein. The egg membrane (the clear film lining the eggshell) is also retained, as the Leicester scientists are exploring potential uses for it, such as wound dressings.

Further blades cut the shell into a fine powder, which is dried to become the filler. The shell processing plant is now running smoothly, although there have been a few hiccups along the way. The blades, for example, jammed and had to be replaced. Now they ensure that as much waste egg is removed from the shell as possible before it reaches the blades.

Each egg produces about 15g of shell and the team has been stockpiling the powder, awaiting the first order. Abbott has been spreading the word about the product and says there has been interest from “hundreds” of plastics companies. “[Polypropylene] plastics are £2,000 a tonne, so you can save a fortune by putting 30 to 40% of eggshell in there as a filler,” says Abbott.

Pancholi has invested about £300,000 in the scheme so far, with £150,000 of that coming from a bank loan and £20,000 from a grant from Food and Drink iNet, an East Midlands Consortium that helps SMEs with projects that promote the environment. One of his 36 staff members works at the eggshell processing plant full time. While Pancholi has not yet sold any of the powdered eggshell, he says the scheme will pay for itself in the next five years as the company saves on rising landfill costs over the next few years.

With 12.2bn eggs consumed in the UK in 2015 – a retail market worth £895m – recycling eggshells is a huge business opportunity, says Abbott. His team at Leicester is also working on a similar eggshell waste project with Freshpak, the Barnsley based sandwich filler company, which boils 5m eggs a week.

Edward Kosior, managing director of plastics recycling and resource management consultancy, Nextek, says there is a large reserve of chalk in the ground in the UK, so getting the industry to take up the eggshell powder as filler “would very much depend on price.”

Kosior says there could be some unique advantages of using eggshell as a filler, such as it being less dense and therefore lighter than chalk. But whether these advantages are lost when the shell is crushed into a powder would need to be investigated, he says.

In the US, researchers at Tuskegee University in Alabama are exploring ways to incorporate waste eggshells in bioplastics to make the material stronger and more flexible. They are experimenting with ultrasound to break the shell into tiny particles. The resulting product, which is biodegradable, could be used in food packaging, including eggs boxes.

Pancholi is in the process of patenting his plant but says his main concern is not financial but environmental. “I don’t like good quality stuff going in the landfill,” he says. “But if there’s an economic benefit that that will be the icing on the cake.”