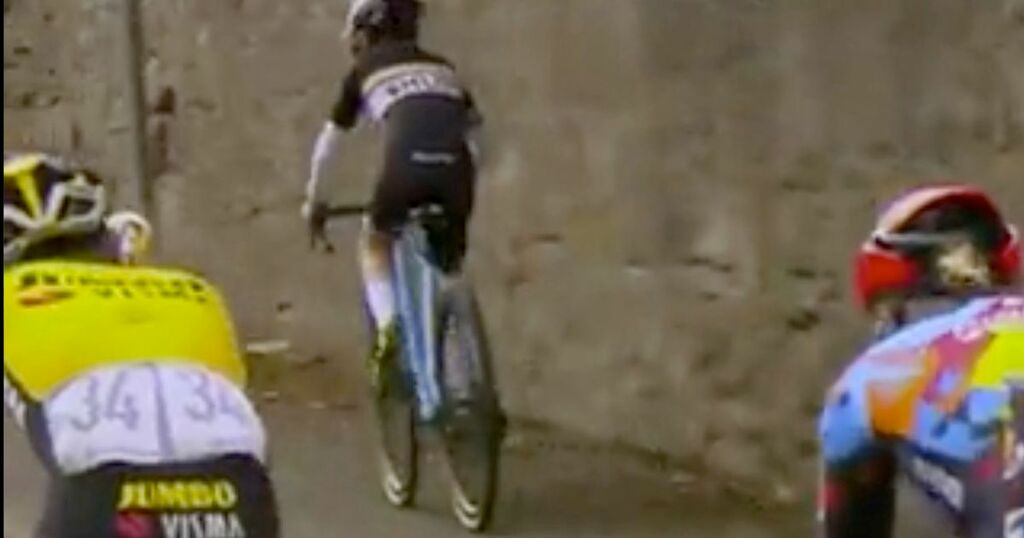 A schoolboy cyclist went viral after he outpaced professional cyclists during the Tour of Britain on Saturday.

Twelve-year-old Xander Graham rode on the pavement alongside riders near Edinburgh and he briefly created separation during an uphill climb.

Dutch cyclist Pascal Eenkhoorn caught Graham up and passed his water bottle to the pretender as he overtook him.

The chance meeting was broadcast live to viewers all over the world, while a video posted to the race’s social media accounts generated more than a million views within 24 hours.

An aspiring cyclist, Graham attended the race to watch riders on the seventh stage as the route passed near to his home.

He had competed in a cycling meet earlier in the day so he had his bike, and spontaneously decided to cycle along the pavement as the breakaway group quickly approached him.

“We already knew they were going to be there because we had seen the route online,” Graham, who hails from Bonnyrigg in Midlothian, told the BBC.

“They were coming round the corner and people were clapping and that's when I decided to start riding up beside them.

“It was about one minute and I was just riding as fast as I could - about 25km an hour I think.”

Catching a bottle thrown by a rider is usually traditional in the sport, but it was banned under Covid regulations and to combat littering - but Graham is planning to display his memento.

“I was just in shock. I was so happy and amazed,” he added. “I’m getting a shelf for it to put up in my room.”

After witnessing his moment of fame, Eisberg - one of the Tour of Britain’s sponsors - offered the young cyclist VIP tickets to watch the final stage in Aberdeen.

Who do you think will win the Tour of Britain? Let us know in the comments section.

"I met Mark Cavendish, I met Wout van Aert - lots of people,” Graham continued. “They actually came over to me and were speaking to me, they knew who I was.

“They were all saying really nice things to me. Eenkhorn was really nice, he took me on a tour of the bus and I went on the stage with them.

“He’s definitely one of my heroes now.”

Graham’s dream is to become a professional cyclist, and the 12-year-old has triumphed in an number of events held by Scottish Cycling, including the 2019 and 2021 road bike series.