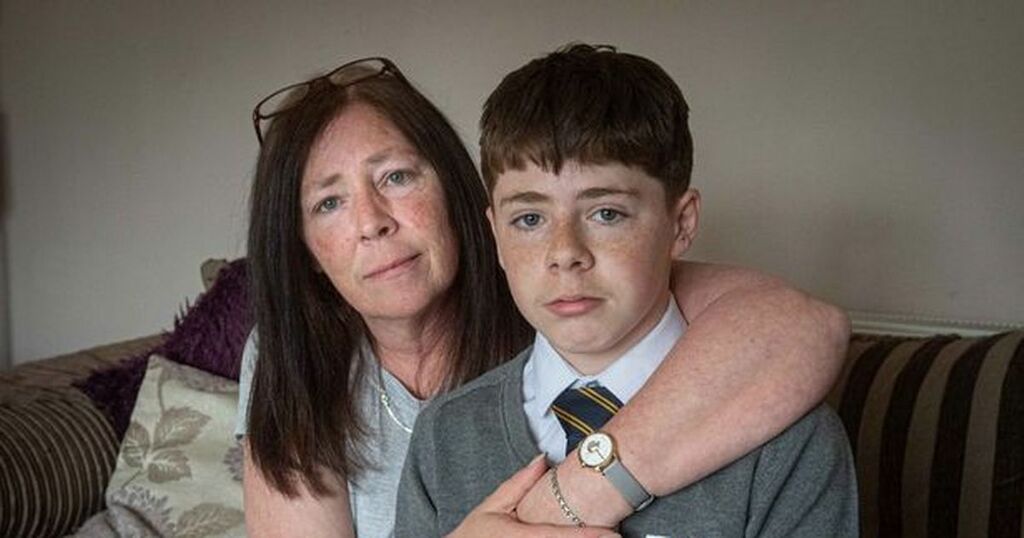 His mum is appealing the decision

Pauline Pollard said her son Mitchell, 12, had been booted out of Christ Church in Yardley Wood, a brand new…

Mitchell Pollard, 12, was kicked out of school after taking a 'toy gun' into a McDonald's restaurant before school, but…

School security guard suspended after video shows boy, 14, being knocked to the ground

A school security guard has been suspended after video footage emerged of a teenage student appearing to be violently pushed to the floor from behind in a park. Co-op Academy Manchester, based in Higher Blackley, north Manchester, confirmed an internal investigation was underway.

UltraSec Security, which is contracted to provide security at the secondary school, confirmed a security guard had been suspended pending the outcome of the investigation. The video footage - which is being shared widely on social media - shows a man wearing a high-visibility tabard running at a boy.

He appears to wrap his arms around the pupil's waist and knock him to the floor. The incident - which was filmed in front of other students from the school - took place in nearby Plant Hill Park, off Plant Hill Road, after the school day had finished on Thursday.

The boy, who is understood to be 14, was in school on Friday 'fit and well', the academy added. The Manchester Evening News has been sent a screenshot of a message from the school to parents informing them of the incident.

In it, principal Chris Beard says: "A member of the security team, provided by an external company, used physical intervention to deal with a student's behaviour. We are formerly investigating this matter."

He added the student was 'safe and well' and the school has spoken with his family. Mr Beard goes on to write: "As a result of this incident, the security guard involved will not be on site whilst we investigate what happened. Incidents such as this are not representative of our community.

"On a personal note, I am troubled by what has happened and I want to make sure that all parents and carers know that we are taking immediate action."

"Our role in schools is to ensure the safety of students, we are taking this incident very seriously.

"The security team were requested to attend the park due to a large number of pupils gathering. The security team are engaged by the school to ensure the safety of pupils pre, during and post school and would therefore respond to any incidents in the close proximity to school grounds in order to carry out these duties."

A spokesperson for Co-op Academy Manchester said: "We are aware of an incident that occurred on Thursday after school in Plant Hill Park involving a member of our third-party security partner, UltraSec Security.

"Upon learning about the incident, we ensured the security team member involved left the school premises, and we contacted the parents of the student. This is now under an internal investigation.

"The student involved was in school on Friday and is fit and well. Given the nature of the incident we are concerned and are taking the matter very seriously, as the safety of our students and staff is our number one priority."

The school enlists the support of a third-party security team for safety. UltraSec Security have provided security guards that are DBS checked and safeguarding trained at the school since January this year. They are also all licenced by the Security Industry Authority (SIA).

His mum is appealing the decision

Pauline Pollard said her son Mitchell, 12, had been booted out of Christ Church in Yardley Wood, a brand new…

Mitchell Pollard, 12, was kicked out of school after taking a 'toy gun' into a McDonald's restaurant before school, but…