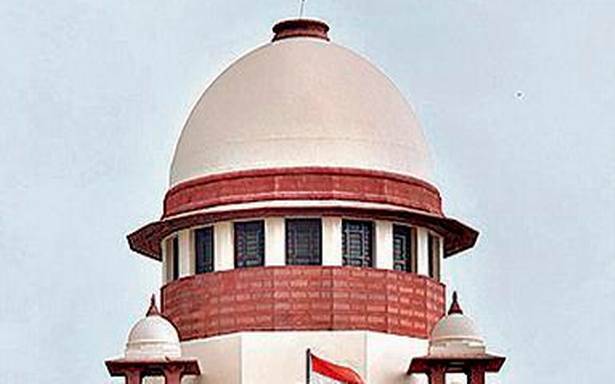 The Supreme Court on Wednesday accused the Centre of “cherry-picking” names for appointments to tribunals groaning under backlog and left almost defunct by long-pending vacancies.

A Special Bench of Chief Justice of India N.V. Ramana, Justices D.Y. Chandrachud and L. Nageswara Rao “held its hand” on initiating contempt proceedings against the government and allowed the latter two weeks to make appointments to “all the tribunals”.

“If the government does not act, we will pass orders,” the CJI said.

Chief Justice Ramana termed the state of tribunals and the thousands of litigants waiting for justice “pitiable”. Cases were adjourned for months. There was no manpower to form Benches. Litigants were made to travel to other faraway States where there were at least some tribunal members available to hear their cases.

The Bench addressed Attorney General K.K. Venugopal about how the government pulled the rug from underneath the hard work of the search-cum-selection committees headed by sitting Supreme Court judges tasked with interviewing and shortlisting suitable candidates for the tribunals.

The government picked a few names from the final ‘select’ list prepared by the committee and then moved on to appoint a few other names from the ‘wait’ list, the Chief Justice said.

“I have seen the selection list of National Company Law Tribunal. The selection committee recommended nine judicial members and 10 technical members. The appointment letters indicate cherry-picking of three names from select list and others from the wait list, ignoring others in select list. In service law, you cannot go to wait list ignoring the select list. What kind of appointment is this,” Chief Justice Ramana asked the Attorney General.

“But doesn’t the government have the power to choose someone,” Mr. Venugopal asked.

“We are a democratic country working under a rule of law... What is the sanctity of these committees if they cannot guarantee appointments?” Chief Justice Ramana retorted.

“What is the sanctity of the search and selection process if the government has the last word? A selection committees undertake elaborate process to shortlist the names,” Justice Rao joined in.

Justice Chandrachud highlighted the case of debt recovery tribunals which had become almost non-functional under the weight of their vacancies.

“When a bank decides to recover debt on a house or a factory, the debtor has no remedy. The High Court refuses to hear his case... There is no recourse to justice,” Justice Chandrachud said.

In one of the tribunals, the Bench said, the selection committee interviewed 534 candidates for judicial members and another 400 for technical members. A list was given. But the government picked a few from the select list and some others from the wait list.

Chief Justice Ramana referred to how a Supreme Court judge, who headed a selection committee for a tribunal, travelled across the country to conduct interviews for appointments during the COVID-19 pandemic. However, no appointments were made by the government.

“We wasted so much time,” the CJI chided the government side.

The CJI pointed out that as per the latest appointment orders, the judicial members would only have a tenure of one year.

“Which High Court judge will go for a one-year tenure,” the CJI asked.

Senior advocate Arvind Datar said the latest tribunal appointment letters issued by the government under the new Tribunal Reforms Act of 2021 showed that members had a tenure of four years or till the age of 67 or “until further orders”.

“There is no provision under the law for the government to say ‘until further orders’. The government cannot revoke an appointment at its will. This affects judicial independence,” Mr. Datar submitted.

Justice Chandrachud pointed out that the Centre had made the few latest tribunal appointments on the basis of the same provisions which were struck down as unconstitutional by the Supreme Court recently.

“We will do something... We will certainly do it,” Mr. Venugopal assured.