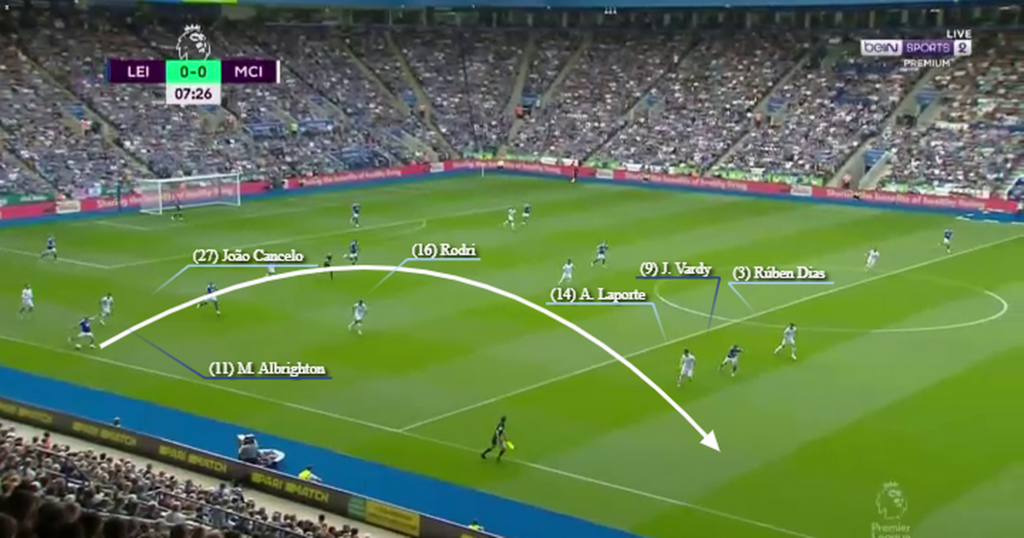 Manchester City's 1-0 against Leicester was their third consecutive Premier League win, but perhaps more impressively it was their third game in a row without conceding.

In the recent 5-0 maulings of Norwich and Arsenal they were rarely troubled, but against Leicester, Pep Guardiola's defenders had to put their bodies on the line - Ederson quite literally.

While keeping a clean sheet at the King Power Stadium is no mean feat and should be applauded, the Blues seriously rode their luck at times. City's Achilles heel, a weakness to counter-attacks, was clear for all to see.

It took just seven minutes for the hosts to exploit City's commitment to pouring bodies forward. After Leicester played themselves out of a tight spot on the right-wing, Marc Albrighton spotted Jamie Vardy peeling off the back of Aymeric Laporte down the right channel.

The long ball fell perfectly for the speedy striker to run on to before he put in a low cross towards Harvey Barnes at the edge of the six-yard box.

Ultimately a combination of Kyle Walker and Ederson - the latter of whom suffered a blow to the mouth for his troubles - thwarted the young attacker, but it was an early warning sign that City couldn't afford to let their guard down too often.

When in possession, City deployed what was effectively a five-man forward line, with Joao Cancelo occasionally getting involved too. While it caused Leicester plenty of problems and ended up helping City get their goal, it was an approach that left them extremely vulnerable to Vardy's pace.

Rodri has all the attributes of a fine defensive midfielder, but when facing a quick counter-attacking side like Leicester, his lack of pace can be painfully obvious. If it wasn't for Walker's superhuman recovery that did enough to put off Barnes, Brendan Rodgers' side could have easily taken an early lead.

City's defence has a naturally high starting position as they aim to launch attacks, but it's a little bit worrying when Guardiola decides not to alter it when facing quick breaks.

Shortly after halftime, Barnes went close again, this time heading Vardy's cross against the bar following a break down that same troublesome right-wing.

Kasper Schmeichel played a fairly innocuous ball out to Albrighton near the touchline, yet City's defensive line was so high that by the time the winger had cleverly flicked the ball over Cancelo's head, City midfielders Rodri and Ilkay Gundogan were already behind the play.

That left Laporte to cover the wing (he was easily bypassed), Albrighton to run into acres of space and Barnes unmarked at the back post, given that Walker had shunted into the centre to cover for Laporte.

Another counter-attack ended up with the ball in the City net, only for a marginal offside call (that came to City's aid more by luck than design) to deny Vardy a ninth career goal against a Guardiola-led City.

There was still time for one more glorious chance for Leicester, who by now must've been wondering how they hadn't managed to exploit City's gaping weakness.

After a Blues set-piece left both Laporte and Dias in the opposition penalty area, Albrighton played another brilliant ball up the right wing to Kelechi Iheanacho, bypassing pretty much every City player bar Walker.

The former City striker did brilliantly to cut inside, nutmeg Walker and lay the ball on a plate for an on-rushing Ademola Lookman, but a sprawling Ederson once again saved City by blocking the shot.

Three of Leicester's big chances came via breaks down the right-wing, away from the recovery pace of Walker. Without such a pacey player to bail them out at left-back, City are always going to be more vulnerable on that side of the field than the right.

Of course, this isn't a new issue for Guardiola, nor is it one that is going to cost his side points in the majority of games this season. Playing in the way that they do comes with a risk of being countered, an occupational hazard that comes with playing ultra-attacking football.

However, as we've seen in recent years, it's a vulnerability that could come back to haunt City in the latter stages of the Champions League, and could potentially scupper their Premier League title defence when they face the rapid frontlines of teams like Chelsea and Manchester United.

How do you think City should address their vulnerability to the counter-attack? Follow our new City Fan Brands Writer Alex Brotherton on Twitter to get involved in the discussion and give us your thoughts in the comments section below.