By Robert Kitson at Sandy Park 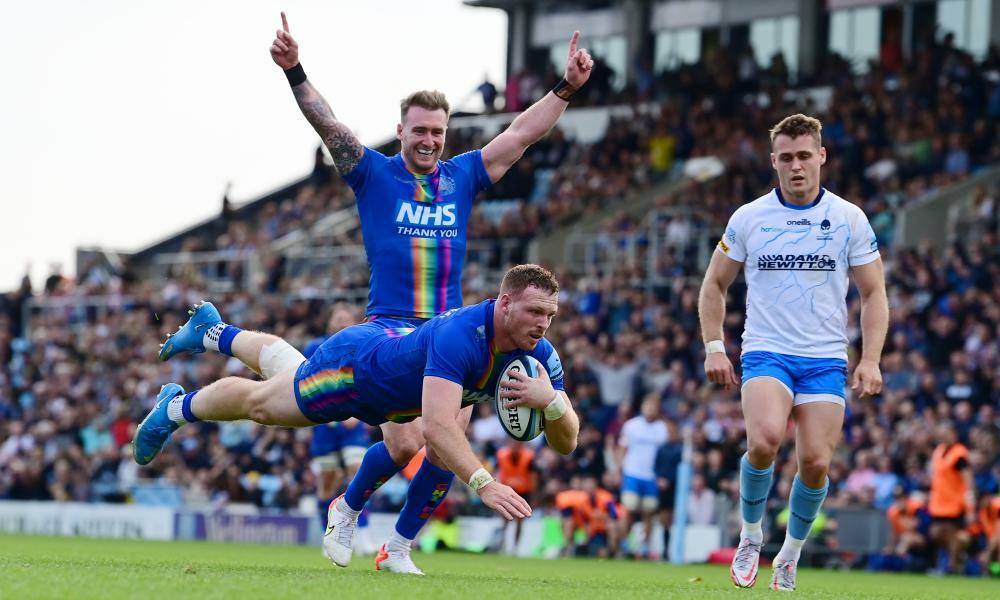 It would be pushing it to compare this Exeter performance to Harlequins’ glorious Friday night pyrotechnics and even the hosts would admit they were not at their sharpest. That said, this was still as one-sided a match as you will see in this season’s Premiership and here was further proof that early season whispers of the Chiefs’ demise as title contenders were premature.

Six converted tries, with two apiece for Sam Simmonds and Facundo Cordero, were a fair reflection of the difference between the two sides on a day notable for the sight of six summer British & Irish Lions back roaming across the Devon countryside. Simmonds, along with Dave Ewers, looked particularly full of running having recently become a father for the first time and the rangy Jonny Hill also makes a conspicuous difference to the home pack.

Stiffer challenges lie ahead, however, and Rob Baxter will know his side could and probably should have racked up 60-odd points against distinctly mediocre opposition. Exeter chose to dedicate this game to the NHS, wearing a specially commissioned blue strip and staging a minute’s applause in recognition of all those who have worked tirelessly during the Covid-19 pandemic, but this contest will not have done much for Worcester’s general health, particularly the peace of mind of their new star winger Duhan van der Merwe.

Even Van der Merwe himself would acknowledge his eagerly awaited debut for Worcester did not go as he might have hoped. His first 40 minutes in a Warriors’ jersey, in particular, were a total nightmare, the apparent consequence of trying too hard mixed with a dollop of misplaced overconfidence. From dropped balls and poor passes to assorted unnecessary turnovers, here was a reminder that an eyecatching signing or two is no guarantee of instant nirvana for any club.

Rory Sutherland, Van der Merwe’s Scotland teammate, also experienced a sobering start to Premiership life, with the first quarter mostly an exercise in collective inaccuracy. Worcester had three promising set-piece positions in the Chiefs’ 22 and contrived to squander them all, with a couple of spilt balls out wide compounding the sense of frustration. Only when Exeter finally established themselves at the other end and gave the ball to a rampaging Ewers four metres out did the scoreboard finally jolt into life.

With the visitors’ penalty count also starting to mount it was not the biggest surprise in the world when, seven minutes before half-time, Exeter were again able to kick to the corner and Simmonds burrowed over from close range to open his account for the season. Stick the England squad back-rower close to the try-line and he remains as single-minded as ever.

So much for the law changes that would supposedly emasculate Chiefs’ trademark short-range power. There has always been more to Exeter than that anyway, a fact underlined when the elusive Cordero finally found some space to exploit and surged over for his side’s third try in the closing moments of the first half.

Henry Slade, captain for the day and also enjoying the chance to kick at goal with Joe Simmonds starting on the bench once more, kicked a third sweet conversion and a 21-0 interval lead was always likely to be tougher to overcome than Quins are making it look just now.

Sure enough the dam was about to burst in earnest. First the nippy Cordero made smart use of an overlap on the right to skate over for his second try and then Simmonds, bursting through a couple of tackles and regaining his feet to sprint clear, did likewise. By the time his brother Joe twisted over for a try of his own, the outcome had long since ceased to be remotely in doubt despite a 79th minute consolation from the visiting lock Justin Clegg.

Worcester, lacking their suspended captain Ted Hill, can at least console themselves there is no relegation this season but one away win in the Premiership since November 2019 tells its own stark story. While Jamie Shillcock had the occasional bright moment at full-back, Ollie Lawrence could make little headway in midfield and the treatment room will be busy this week. Leicester Tigers are next up at home next Saturday and, on this evidence, significantly more thrust will again be required.