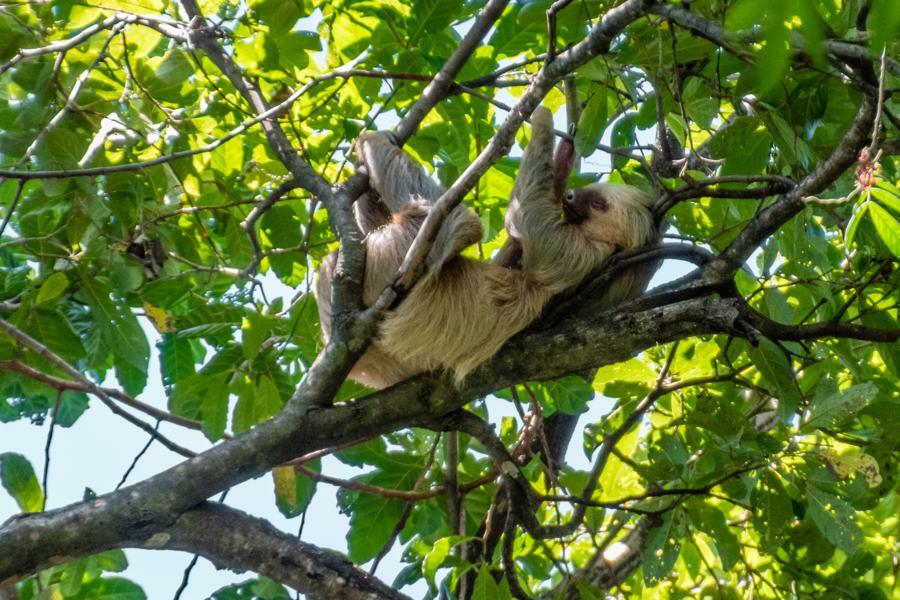 Have you felt a little sloth-like during the Covid pandemic, spending a lot of time alone and lazing around on your couch? Just as staying at home protects you during a pandemic, sloths’ lazy solitariness is a survival skill and an evolutionary advantage. So why not spend this year’s International Sloth Day, October 20, celebrating the savvy sloth and planning a trip to Costa Rica to see sloths for yourself (responsibly, of course)?

According to the World Wildlife Fund, the average sloth sleeps about 15 hours daily and, when it moves at all, travels only about 41 yards each day at a very slow speed. While this may seem lazy, The Conversation explains how it’s an evolutionary advantage that has allowed the sloth to survive for 64 million years.

Moving slowly makes it difficult for predators like jaguars and eagles to spot sloths. Sloths also maintain a lower body temperature than most mammals and need a lot less food, which means they can spend more time safely at “home” rather than out collecting dinner where danger lurks. Lucky sloths live a life of leisure, which is one of the reasons Costa Rica adopted the animal as a national symbol.

Costa Ricans, called Ticos, generally have a “pura vida” approach to life. Translating as “pure life” or “simple life”, it’s about living as stress free and happy as possible. When you visit the Central American country, you’ll hear “pura vida” used as “how are you?”, “I’m great, thanks”, “have a wonderful time”, “cheers”, “see you later” and more.

In summer 2021, lawmakers unanimously declared both the two- and three-toed sloths as national symbols of Costa Rica. While it began as a bit of a joke, Jorge Carballo brought the idea to Congresswoman Yorleny León Marchena and before long it became official. In explaining how they contributed to the initiative, the Sloth Conservation Foundation describes how León Marchena said that, just like sloths, Costa Ricans “are known for their peaceful attitude, slow-paced life, and little stress.”

Costa Rica, already one of the most sustainable countries in the world and where over a quarter of the land is protected, is home to 5% of the earth's biodiversity and to two types of sloths. The new declaration also introduced additional protections for sloths and their habitats, enhanced scientific research, and will create more safe aerial sloth crossings above the roads where sloths are most at risk.

Where to responsibly see sloths in Costa Rica

If you travel with a guide in Costa Rica — the tourism board has a list of certified guides — they’ll likely point out sloths hiding in the trees of the country’s rainforests.

If you look carefully, you might spot them on your own too, for example while ziplining or walking on hanging bridges through the tree canopy. Sloths are found throughout Costa Rica and you have an especially good chance of seeing them in Arenal Volcano National Park, Manuel Antonio National Park and Tortuguero National Park.

You can also visit one of Costa Rica’s wildlife rescue centers for a closer view of sloths. At these rescue centers, some animals are being rehabilitated before they’re returned to their natural environment after injury or illness while others are no longer able to live without care from humans.

Not far from the San José airport, for example, is the Rescate Wildlife Rescue Center. Other centers include Kids Saving The Rainforest, Las Pumas Wildlife Sanctuary and Natuwa Wildlife Sanctuary. Rescue centers accept donations and many provide volunteering opportunities too. A great gift idea is adopting a sloth, where you support sloths’ rehabilitation and receive an adoption certificate, animal photo, and updates on the progress of “your” sloth.

Don’t forget that in Costa Rica, it’s illegal to touch, pet or hold any wild animal, including sloths. Back in 2019, Costa Rica launched the #StopAnimalSelfies campaign to stop harmful contact with wildlife. It’s a good practice wherever you travel.

The current requirements to enter Costa Rica are described on VisitCostaRica.com.