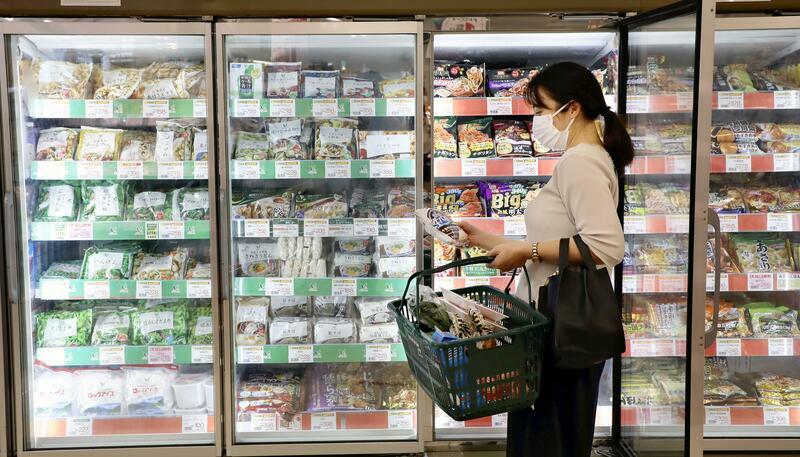 People are eating at home more amid the coronavirus pandemic, but some of those who cooked elaborate dishes at the outset are getting tired of the prolonged stay-at-home situation. Sales of frozen foods and ready-to-eat dishes have been increasing, and a new app that uses artificial intelligence to plan meals is also gaining popularity.

"The long summer break is over, but my first-grade daughter has staggered attendance at her school under the state of emergency. She eats three meals at home, so it's hard to think up a menu every day," sighed Wakako Yokota, 33, as she shopped at a supermarket in Yokohama in early September.

Lifescape Marketing Co., a Tokyo-based market research company, conducted a survey about dinner on about 400 households with at least two members in Tokyo and the prefectures of Chiba, Kanagawa and Saitama. It found that many people are tired of cooking.

A comparison between March-August 2020, during which the first state of emergency took place, and the same period of this year shows that the frequency of eating homemade dishes such as miso soup, seasoned rice with ingredients, and stir-fried vegetables declined. More and more people were eating less time-consuming dishes such as ready-to-eat croquettes and packed meals.

"People eat more at home now. Given the large number of double-income families, however, it's difficult to prepare a wide variety of dishes every day. Simple, convenient dishes are being eaten more, especially by families with small children," a 41-year-old official at the company said.

Supermarkets across the country have seen increasing sales of prepared dishes such as deep-fried foods, and some stores have expanded their shelf space for these products.

Easy-to-prepare frozen foods are also being consumed by many. According to the Japan Frozen Food Association, the factory shipment value of frozen foods for home use was 374.9 billion yen last year, surpassing for the first time those for restaurant use, at 327.9 billion yen. This clearly suggests that the demand for home meals has increased, while that for eating out has declined.

Among the items that saw large year-on-year growth were fried rice (up 52%), gratin (24%) and shumai dumplings (22%). Many products for professional use marked significant declines, including seafoods such as squid and octopus, and agricultural products.

Major food company Sapporo Holdings Ltd. has developed an app called Uchirepi that uses AI to plan for meals. The Tokyo-based company started providing the service in January and about 30,000 people have since signed up with the app.

If a user shops at a supermarket and takes a picture of their receipt with a smartphone camera, the app chooses from about 16,000 dishes and displays recipes that can be made with the ingredients on the receipt.

The company says the app is aimed at supporting people who have trouble planning meals. It's also making use of the data collected via the app to develop new products.

"Some people are struggling to plan everyday meals, while a growing number of others are enjoying cooking with expensive ingredients and seasonings," said Hiroyuki Hayashi, a consultant at the Nomura Research Institute, Ltd. "Since people can't eat out, they'll continue to enjoy unusual home meals for the time being."