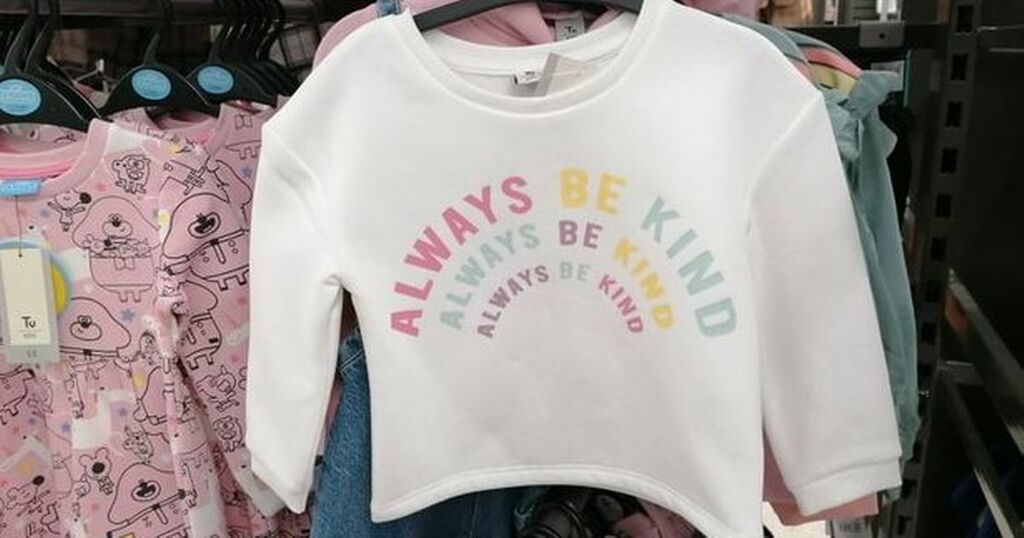 Supermarket giant Sainsbury's has got into hot water with customers over its latest range of children's slogan wear.

The new range has hit stores across the country emblazoned with 'stay wild' on a boy's T-shirt and 'always be kind' on a girl's top.

But the controversial designs have run into trouble with campaigners among those to point out they send the wrong message to youngsters.

Central to their argument is that the slogans reinforce negative stereotypes and attitudes that "endanger women".

But Sainsbury's bosses assured their tops can be worn by anyone and are not branded for 'girls' or 'boys'.

MEN reports how @SkeinHeroine tweeted Sainsbury's to say: "@tu_clothing @sainsburys looking at you. Was in your store yesterday shopping for clothes for my girl/boy twins and your slogan t shirts are such a cliche but one that reinforces attitudes that ultimately endanger women."

She ended her tweet with '#SheWasJustWalkingHome and #EnoughIsEnough', hashtags that were trending in relation to the murder of Sarah Everard by police officer Wayne Couzens.

Author and teacher Kate Long has also criticised the 'be kind' message on the Sainsbury's girl's top.

Tweeting a photo of it alongside a 'Here comes trouble' boy's T-shirt from another retailer, she said: "High street shops: you are part of the Male Violence Against Women pattern, telling boys from toddlerhood that bad behaviour is 'natural' and endorsed: telling girls relentlessly to forego their boundaries. Can you not see it? Can you do something right now, thank you?"

They're clearly not alone in their view. Kate's tweet received more than 2.2k likes and has been retweeted hundreds of times.

Among those retweeting both messages was Let Clothes Be Clothes, a campaign to end gender stereotyping in the design and marketing of childrenswear.

Its lead campaigner Francesca Mallen said: "If there was one thing our high street should shove in a bin, it's slogan T-shirts that literally spell out for girls and boys what sort of behaviours our society expects of them based on outdated and harmful gender stereotypes.

"No, it's not just a T-shirt - and those are not just words. These sorts of slogans both reflect, and reinforce the worst of us - boys are wild, troublesome, 'boys will be boys' right? Opposite girls who are constantly told their only worth lies in 'love' or being pretty.

"Children learn really early that boys are there to look and act, and girls are there to be looked at and remain passive. This is deep seated misogyny that further encourages predatory behaviours in boys and men, and we need to address it urgently."

She also highlighted a tweet from Kate Long earlier this year which pointed out separate boys' and girls' clothing ranges in a Sainsbury's store just days after the retailer claimed that items haven't been separated into 'boys' and 'girls' 'for many years'.

A Sainsbury’s spokesperson said: "Our kids range includes a wide range of designs which everyone can enjoy and we do not label our items ‘boys’ or ‘girls’.

“We’re looking into old signage which has been identified in store which does not reflect this policy."