LONDON — Several weeks after taking over Ukraine’s southern port city of Kherson, Russian soldiers arrived at the offices of local internet service providers and ordered them to give up control of their networks.

“They came to them and put guns to their head and just said, ‘Do this,’ ” said Maxim Smelyanets, who owns an internet provider that operates in the area and is based in Kyiv. “They did that step by step for each company.”

Russian authorities then rerouted mobile and internet data from Kherson through Russian networks, government and industry officials said. They blocked access to Facebook, Instagram and Twitter, as well as to Ukrainian news websites and other sources of independent information. Then they shut off Ukrainian cellular networks, forcing Kherson’s residents to use Russian mobile service providers instead.

What happened in Kherson is playing out in other parts of Russian-occupied Ukraine. After more than five months of war, Russia controls large sections of eastern and southern Ukraine. Bombings have leveled cities and villages; civilians have been detained, tortured and killed; and supplies of food and medicine are running low, according to witnesses interviewed by The New York Times and human rights groups. Ukrainians in those regions have access only to Russian state television and radio.

To cap off that control, Russia has also begun occupying the cyberspace of parts of those areas. That has cleaved off Ukrainians in Russia-occupied Kherson, Melitopol and Mariupol from the rest of the country, limiting access to news about the war and communication with loved ones. In some territories, the internet and cellular networks have been shut down altogether.

Restricting internet access is part of a Russian authoritarian playbook that is likely to be replicated further if Ukraine’s invaders take more territory. The digital tactics have put those Ukrainian areas in the grip of a vast digital censorship and surveillance apparatus, with Russia able to track web traffic and digital communications, spread propaganda and manage what news reaches people.

“The first thing that an occupier does when they come to Ukrainian territory is cut off the networks,” said Stas Prybytko, who leads mobile broadband development in Ukraine’s Ministry of Digital Transformation. “The goal is to restrict people’s access to the internet and block them from communicating with their families in other cities and keep them from receiving truthful information.”

Russia’s rerouting and censorship of the Ukrainian internet has little historical precedent elsewhere in the world. Even after Beijing took more control of Hong Kong beginning in 2019, the internet in the city was not placed under the same kind of censorship controls as in mainland China. And while Russia’s tactics can be circumvented — people use virtual private networks, or VPNs, which hide a user’s location and identity to get around the internet blocks — they might be applied to future occupations.

In Russian-controlled Ukraine, the internet restrictions began with crucial infrastructure built years ago. In 2014, after Russia annexed Crimea, the strategic peninsula in southern Ukraine, a state telecom company built a subsea cable and other infrastructure across the Kerch Strait to redirect internet traffic from Crimea to Russia.

Data from Ukrainian networks is now being redirected south through Crimea and through those cables, researchers said. On May 30, the traffic of the Kherson-based internet networks like Skynet and Status Telecom went dark. Over the next few days, people’s internet connections were restored, but they were running through a Russian state-controlled telecom company in Crimea, Miranda Media, according to Doug Madory, director of internet analysis at Kentik, a company that measures the performance of internet networks.

Russian forces are also destroying infrastructure that linked the internet in the occupied areas to the rest of Ukraine and the global web, said Mykhailo Kononykhin, head of information technology and a system administrator for a provider that had about 10,000 customers in the Melitopol area. He added that Russian forces were also stealing equipment from Ukrainian internet providers to strengthen connections to Crimea, including laying more fiber-optic wires.

In some Russian-occupied areas of Ukraine, digital censorship is even worse than inside Russia, government and industry officials say. In the Kherson and Donetsk regions, Google, YouTube and the messaging app Viber have been blocked, internet operators said.

“We’re seeing an occupation of the Ukrainian internet,” said Alp Toker, director of NetBlocks, an internet monitoring service based in London.

Konstantin Ryzhenko, a Ukrainian journalist in Kherson, said many Ukrainian websites and online banking services were inaccessible, as well as social media services such as Facebook and Instagram. VPNs have become essential for people to communicate and stay in touch, he said.

Russia is requiring Ukrainians there to show a passport to buy a SIM card with a Russian phone number, Ryzhenko said. That makes it easier for Russian troops to keep tabs on people with their mobile devices, including location and internet browsing.

“You’re buying the device that is wiretapping your traffic, knowing full well who you are, and identifies precisely all your actions on the internet,” he said.

In some occupied areas, internet and mobile phone networks were shut off, creating a digital blackout. A few Ukrainian internet providers sabotaged their own networks rather than turning them over to the Russians, according to the Ukrainian government.

Anton Koval, who lived for 21 days in a village outside Kyiv that was occupied in February and March, said Russian soldiers had gone through town shooting and destroying cellular towers. Cut off from information and communication with the outside world, some residents grew so desperate that they climbed onto roofs and hilltops seeking connections.

“But the Russians hunted people who tried to climb high places,” Koval said. “When a close neighbor tried to climb a tree, they shot him in the leg.”

Beyond Ukraine’s occupied territories, the internet has been a key battlefield. While Russia has imposed a blunt censorship regime at home, Ukraine has effectively used social media to rally global support and share information about civilian deaths and other atrocities. Mobile apps warn Ukrainians about missile attacks and give updates about the war.

About 15% of internet infrastructure across Ukraine had been damaged or destroyed as of June, according to the government. At least 11% of all cellular base stations, which are equipment that link handsets to mobile networks, do not work because of damage or lack of power.

Yet in many parts of Ukraine, internet and mobile service has remained strong. Ukraine’s tech sector has been one of the few bright spots in an otherwise decimated economy. Telegram, the messaging and communications platform, has remained available, even in many occupied areas.

More than 12,000 internet Starlink terminals made by SpaceX, the rocket company controlled by Elon Musk, have supplemented coverage, said Andrii Nabok, an official in the Ministry of Digital Transformation, which is trying to restore internet access in Ukraine. A government loan program is being drafted to hasten repairs.

Where Ukrainian forces have regained control of occupied territories, restoring internet and cellular services was among the first tasks. Near the front lines, telecom technicians are escorted by soldiers, sometimes in the face of artillery fire. Prybytko, who oversees some network rebuilding efforts for the government, said telecom workers were the “hidden heroes” of the war.

Lack of proper internet or communication tools is just one small part of the misery in occupied areas with no electricity or water and food shortages. “We are not speaking about internet or providing some information to people, we are speaking about survival,” said Yuliia Rudanovska, who lives in Poland but has family in Izyum, which faced weeks of air attacks from Russian forces.

Oleksandra Samoylova, who lives in Kharkiv in the northeast, said she had not been able to reach her grandmother in an occupied area about 85 miles away since April. The only word received about her were two messages that she was OK from a neighbor who sent short texts after reaching a nearby village where there was a connection.

To help people in those areas connect to the global internet, Ukraine’s government is providing free access to certain VPN services. Ukrainian officials are also seeking donations for routers and other equipment to put internet service into bomb shelters, including at schools.

“The educational process should continue, even in bomb shelters, so they need internet connections underground,” Prybytko said. 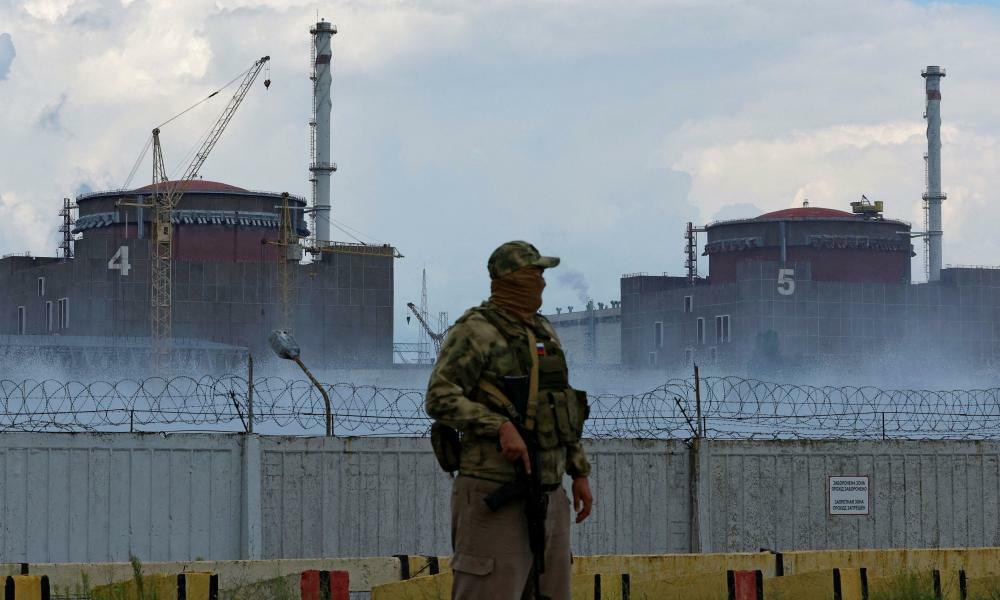 The Guardian - UK
From analysis to the latest developments in health, read the most diverse news in one place.
Russia Shows Off Orlan-10 Military Drone In Eastern Ukraine’s Occupied Donbas Region

The footage was obtained from the Russian Ministry of Defense early on Friday, August 5.

The images were obtained from the Chernihiv Regional Territorial Center Of Recruitment And Social Support on Monday, August 8.

Russia and Ukraine have traded accusations that each side is shelling Europe’s biggest nuclear power plant in southern Ukraine.

France 24
One place to find news on any topic, from hundreds of sites.
One person killed after Ukraine appears to hit major Russian airbase in Crimea – as it happened