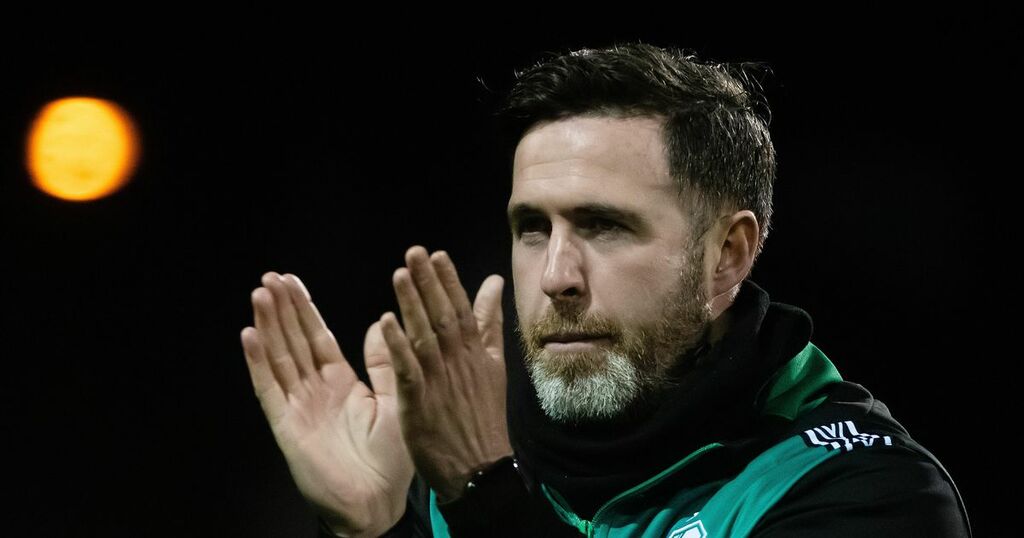 The Hoops and the Candystripes clash in a top-two showdown at Tallaght Stadium (7.45pm) tonight

A second half goal from Mandroiu secured a massive three points for Stephen Bradley's side.

A look at the latest Premier League headlines

McLaren had been coy about the scale of its upgrades for the Formula 1 Spanish Grand Prix, but the scope…

Ruaidhri Higgins believes Derry City are going to become ‘one hell of a team’ and insists exciting times are ahead.

The Candystripes boss was devastated to leave Tallaght Stadium without any reward after losing 1-0 to Shamrock Rovers.

Danny Mandroiu’s late goal off the bench saw the champions stretch their lead at the top to four points.

But Rovers were under the cosh for long periods until they finally got a foothold in the game during a strong 20-minute spell in the second-half.

Higgins had insisted that Derry would give it a go in Tallaght and they did not disappoint but were unable to take their chances.

It has been a recurring theme after taking just two points from a possible nine after draws with St Pat’s and Bohemians beforehand.

But with new arrivals set to come in the summer and star turns like Patrick McEleney and Michael Duffy to return from injuries, Higgins is bullish about the future.

“We plan to build and we’re going to be one hell of a team,” he said.

“Shamrock Rovers have that know-how - they are back-to-back league champions, they have players who have won more than two leagues.

“We want to close the gap on them and I think we have done substantially. I was really proud of that performance.

“And I think it’s clear to everybody that we’re coming, we’re coming strong and we’re going to be a good team over the next few years.

“It shows what we're capable of and if we add (McEleney and Duffy) to that and add one or two in the summer, there's exciting times ahead.”

McEleney suffered a hamstring injury in Monday’s draw with St Pat’s and missed the Tallaght clash but Higgins delivered an upbeat prognosis.

“It's good news, really good news,” he said. “We've got three games up until the break and he'll more than likely miss them but he'll be ready to rock when we come back.”

And quizzed on his summer transfer targets, Higgins hinted that he will be looking to bring in young, exciting players from outside the league.

“Stephen Bradley has been here at Shamrock Rovers for a long time and done an outstanding job. He’s built his squad over a period of time,” explained the Derry boss.

“We know that people want things yesterday. Ultimately that’s not how it works but we want to get there quickly. If we have to bring one or two in the summer, we’ll do that.

“But we won’t be rash or reckless. It has to fit the profile of what we’re looking for, which is young, hungry players.

“I know we brought Shane McEleney who is 31, Patrick McEleney, 29, and Michael Duffy at 27 back to the club.

“But that’s because they are from Derry and it means something to them. The type of players we’re looking to bring in from outside Derry will be younger.

“That’s because we want to build something over a period of time. It’s clear from tonight that we’re going in the right direction.”

And Higgins added: “I’m very, very clear in my mind on how we want to move forward. We know that we’re going to be an outstanding team.

“If we keep playing like we’re playing and add that wee bit of ruthlessness that we showed at Inchicore, we’ll be very, very good.”

The Hoops and the Candystripes clash in a top-two showdown at Tallaght Stadium (7.45pm) tonight

A second half goal from Mandroiu secured a massive three points for Stephen Bradley's side.

A look at the latest Premier League headlines