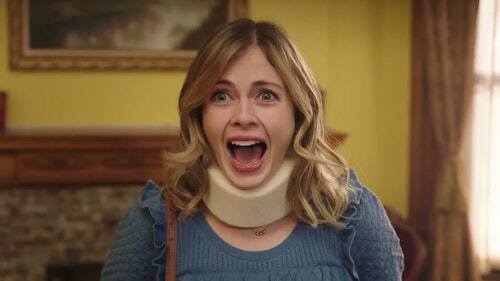 Moms might know her better as spunky journalist Amber Moore (no relation) in Netflix’s feel-good romance franchise A Christmas Prince. Disney fans still recognize her as Once Upon a Time’s Tinker Bell.

But if you grew up watching Saturday morning TV, you may remember the actress as Summer Landsdown, the Yellow Ranger, in Power Rangers RPM. For McIver, who grew up in New Zealand, where the show was filmed, it was the experience of a lifetime.

“I had one of the best times in my life doing Power Rangers,” McIver tells Inverse. “I was living at my parent's house. I got to put on spandex, fight monsters in giant rubber suits, work with all my friends, do stunts, and film on beautiful beaches. It was like a dream.”

Even 12 years later, McIver is genuinely excited when people remember her Yellow Power Ranger. “The fanbase of the Power Rangers universe has been incredible,” McIver adds. “They're so dedicated and supportive.”

McIver has a way of inspiring that dedication; just call her the people’s protagonist. Whether on Power Rangers, iZombie, or her new CBS sitcom Ghosts, McIver carries an infectious enthusiasm into every role. It’s this factor that makes her a truly versatile actress, equally charming and compelling whether she’s a romantic lead or an action hero.

Ghosts, now airing on Thursdays, is the latest in a long line of diverse projects to benefit from McIver’s ebullient brand of star power.

The series’ huge ensemble cast is tied together by McIver’s bright, blithe spirit.

In Ghosts, McIver plays Sam, who inherits a decrepit mansion and decides to renovate it with her husband Jay (Utkarsh Ambudkar) — only to discover their new home is haunted. An adaptation of the hit BBC series, this American version moves the original’s setting across the pond and compresses its timeline, which had featured spirits from prehistoric times, the ‘90s, and just about everywhere in between. Still, co-creators Joe Port and Joe Wiseman sought to feature ghosts who’d be found mainly stateside, from hippies to Native Americans.

“It's people who would have never met in life — not just from different walks of life, but literally from different eras,” Wiseman tells Inverse. “One positive message of the show is that you get to see how people who are so different get to know each other, learn from each other and affect each other.”

The series’ huge ensemble cast is tied together by McIver’s bright, blithe spirit; her character encourages the others to bond over their differences rather than letting their personal and historical divisions tear them apart.

“It's such an ensemble of how all of our energies match together,” McIver says of her latest project. “You work out which color you're offering to paint into this landscape that we're painting.”

While yellow was the first color the actress painted with, all those years ago on Power Rangers, it was the pinkish hue of brains that led to McIver’s breakout moment as zombie crime solver Liv Moore in The CW’s iZombie. Thanks to McIver’s ineffable charisma and the series’ offbeat premise, it’s quite appropriately found a second life streaming on Netflix.

iZombie was the prototype for a particular subgenre of off-the-wall CW series. It contained equal doses of emotion, comedy, and supernatural elements, conjuring an unusually timeless vibe for its crime procedural that only seems smarter in hindsight, as series with similar tonal makeups like Riverdale and Legends of Tomorrow have found success. Unfortunately, not everything in iZombie has aged like fine wine. One storyline followed a pandemic called the Aleutian Flu, which could seem on the nose in this day and age.

McIver is now dealing directly with a different kind of afterlife.

When I mention this to McIver, I can hear her cringe. “Good Lord. I can't believe you brought that up,” she says. “It just seems so ominous, doesn't it? Obviously, nobody could have predicted, but it did have some quite alarming comparisons that could be drawn. But I hope nobody took anything too literally. You can check the timestamps!”

On Ghosts, McIver is now dealing directly with a different kind of afterlife than the one she navigated on iZombie.

The series may be a network sitcom, but don’t expect a multicam laugh riot. At the end of the day, Ghosts is a show about dead people coming to terms with their passings, which means it lands heartfelt emotional beats about as often as it does belly laughs.

“The British series really hit that hard in a lot of episodes,” co-creator Port tells Inverse. “Their third episode — ‘Pat's Death Day,’ where his wife comes to visit at the end — was the one when I really hooked into that show. It's a story that is funny, but it's also a story about life and death and people who have this loss. We wanted to hit that note early.”

In the original BBC series, now streaming on HBO Max, the pilot depicts Alison, the inspiration for McIver’s Sam, suffering a concussion and undergoing an induced coma. The show skips over the accident, focusing mainly on her newfound ability to see the dead.

But in the American version, we get a montage of Sam being taken into the hospital and her husband rushing to her side. It’s a scene that wouldn’t be out of place in an episode of Grey’s Anatomy. Still, it fits within the narrative of Ghosts, given the genuine emotion with which its cast brings their characters to life — no matter how ridiculous the show’s larger premise may seem.

Saying that McIver likes genre television is an understatement. She’s played zombies and fairies, and now she’s tangling with ghosts. There aren’t many more mythical realms left to conquer, but McIver has ideas.

“I wouldn't mind playing a mermaid; I grew up on the beach,” she says. “The only problem is, I'm not the strongest swimmer. But I wouldn't mind something on the seas like pirates or mermaids.”

But for now, she’ll use her trademark enthusiasm to bridge the worlds of the living and the dead. If you’re looking for the kind of ensemble comedy that’s rare these days, charged with the off-kilter humor of British sitcoms, look no further than Ghosts.

McIver’s latest, as she says, is more than just a network sitcom. The series attempts to cross the comedic with the emotional, the supernatural with the mundane, the past with the present —and, yes, life with whatever comes next. And who better to traverse that territory than McIver, a fan-favorite actress with an audience that will follow her anywhere.