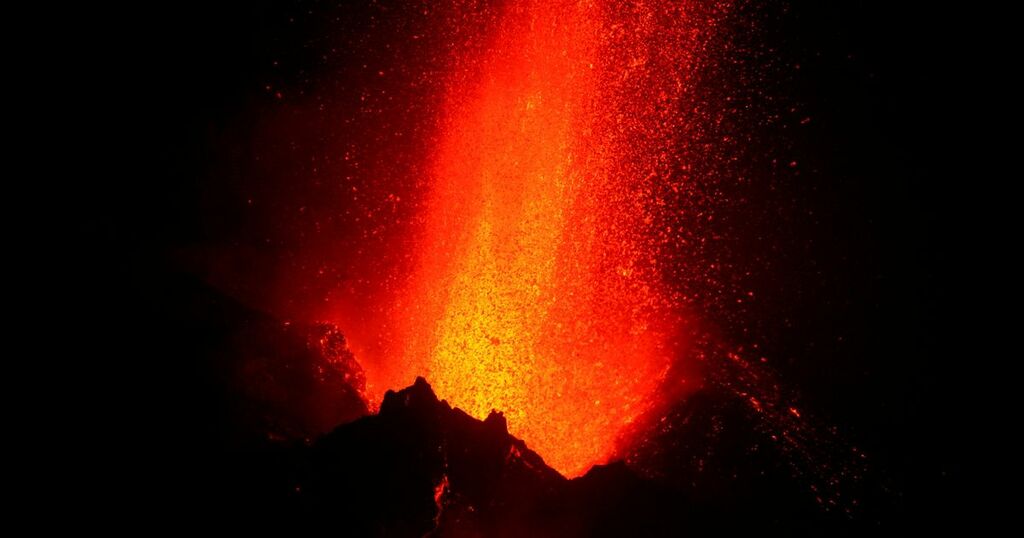 Anselmo Pestana, the Spanish government representative in the Canary Islands, tweeted: "During the early morning new flows have caused more destruction of properties.

"Helplessness and pain in the face of so much damage"

There was also a series of 37 'seismic movements" on Saturday, with the largest measuring 4.1, the Spanish National Geological Institute said.

La Palma's airport, however, reopened on Saturday after being closed since Thursday because of ash, Spanish air traffic operator Aena said.

The Mirror told of the plight of 500 residents who were forced to flee their homes three weeks ago.

Officials on the Spanish Canary Island of la Palma began evacuating 500 people and animals before huge plumes of smoke began billowing into the air.

And a river of lava poured down towards populated areas in the south of the island authorities ordered the complete evacuation of four villages, including El Paso and Los Llanos de Aridane.

Video footage then showed the looming devastation as lava edged down from five five fissures torn into the hillside.

The Mirror told last month how red-hot lava could be seen on all four sides of the one-storey property but instead of engulfing the building, the river had opened up to leave a 'D' shape around it.

The owner of the home then said the building had finally succumbed to the lava, saying 'everything is destroyed.'

Rainer Cocq, told Spanish newspaper El Mundo from his permanent residence in Denmark: "We have lost everything on our beloved island. It is very sad. Inge [his wife] and I are devastated."

During the latest devastation 6,000 people have been evacuated from their homes on the Spanish island, which has about 83,000 inhabitants.

Lightning flashes were seen near the eruption early on Saturday.

A study published in 2016 found lightning can be produced during volcanic
eruptions because the collision of ash particles creates an electrical charge.

Airlines bound for the Canary Islands were advised to load extra fuel in case planes had to change course or delay landing because of ash, said a spokesman for Enaire, which controls Spanish airspace.