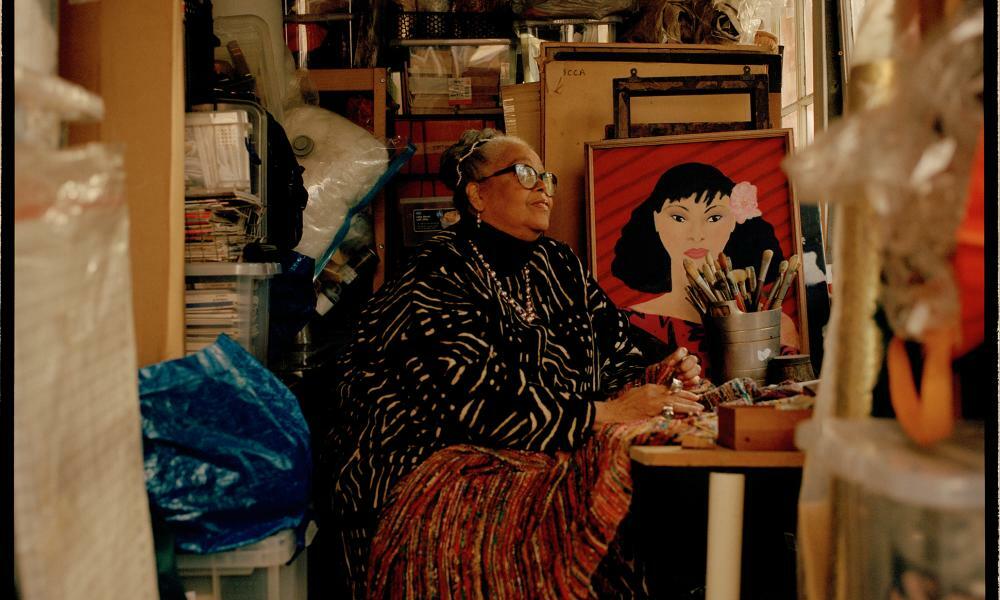 From the 1980s to the early 2000s, artist and archivist Rita Keegan fervently collected and preserved newsletters, leaflets, photographs and exhibition literature from the British Black arts scene. “It [didn’t] matter how fabulous the show – if you didn’t have the ephemera, it was hard to say that you existed,” she told the Art Newspaper last summer. “It’s very easy to be written out of history, if you don’t have those pieces of paper.”

Boxes and files stored behind the sofa in Keegan’s living room and a garden “shedio” in her south London home are a portal to the past, specifically, into the seminal British Black arts movement founded in 1982. This pivotal moment in art history saw artists such as Sonia Boyce, Eddie Chambers, Denzil Forrester, Lubaina Himid and Maud Sulter galvanised to create and curate works together in the aftermath of the 1981 Brixton uprisings and in response to their marginalisation from the mainstream art world.

Keegan’s personal records of this era (officially known as the Rita Keegan Archive Project) were on display at the South London Gallery last year. Although slightly thwarted by Covid restrictions, 13,000 visitors were able to get up close with an assortment of noteworthy documentation from the British Black arts movement, including a private view of Passion: Black Women’s Creativity of the African Diaspora, a 1989 exhibition of work by Black female artists, and a handmade Christmas card to Keegan from the late artist Donald Rodney.

Now, Keegan is back at the same gallery with her first solo exhibition in 15 years. Its title, Somewhere Between There and Here, is inspired by a poem written by her artist uncle, Keith Simon, whom she didn’t know very well, but who had moved to England from America in the early 50s and exhibited work alongside artists associated with the 1960s Caribbean Artists Movement, such as Ronald Moody, Althea McNish and Errol Lloyd. Keegan said in an interview that she wanted to include him in the exhibition so he could “become part of the canon of the art world”.

This exhibition marks a major opportunity to bring Keegan’s work back into the public consciousness, and visitors can expect to see digital animation, collages, textiles and paintings, as well as a remixed version of a mixed-media installation originally presented at the Bluecoat in Liverpool as part of the 1992 Trophies of Empire exhibition curated by Keith Piper. A highlight of the show will be Keegan’s Social Fabric, constructed from A4 patchworks donated by a global network of friends and family.

Family and the concept of memory have long been subjects in Keegan’s work. In the style of Frida Kahlo-inspired self-portraits, she often painted her parents against bright and decorative backdrops. She has an extensive archive of family photographs depicting her Black middle-class Canadian family dating as far back as the 1880s. Her series of monoprint collages often feature photographs of loved ones, such as her 1992 work Remember Me, which shows her smiling mother sitting on an area of grass and engulfed by sunlight. These works also explore the politics of dress, adornment, and Black female identity.

Keegan was born in the Bronx in New York in 1949 and is of Caribbean and Canadian descent. She trained as a painter at San Francisco Art Institute from 1969 to 1972 before migrating to the UK in 1980. She was heavily involved in the Soho nightlife scene. Reflecting on this era, Lucy Davies, the director of 198 Contemporary Arts and Learning, writes in Mirror Reflecting Darkly: “High life, low life – both could be found in 80s Soho. That’s where I met Rita, The Goddess of the Bronx, at Fred’s, the not-so-private members club off Dean Street, where we both worked the door.”

By 1983, Keegan was working consistently in the arts, helping to establish the Brixton Art Gallery, which occupied three interlinked railway arches on Atlantic Road. There, she curated the first exhibition by the Black Women Artists collective. Brixton also showed the work of the Lesbian & Gay Artists Group and was the first British gallery to nationally put on exhibitions where artists were selected on the basis of being queer.

Emerging technologies would prove crucial in Keegan’s career. In 1984, she co-founded CopyArt, a resource and education centre for community groups and artists working with computers, scanners and photocopiers, funded by a grant from Ken Livingstone’s Greater London Council (GLC). They also ran workshops for activist and community groups and helped to produce print materials for events such as the 1986 anti-apartheid demonstration. Although the GLC would be abolished soon after by Margaret Thatcher, it helped to develop the Black arts sector through grants from the “ethnic arts subcommittee”, whose budget grew from £400,000 in 1982-3 to more than £2,000,000 in 1985-6.

Keegan was also a staff member at the Women Artists Slide Library (WASL) from 1985 to 1990, where she established the Women of Colour Index – a catalogue of slides recording the work of Black women artists.

She continued to produce art alongside curating and archiving and she exhibited in several group shows including Let the Canvas Come to Life with Dark Faces at Bluecoat in 1990, which explored the links between self-portraiture and the Black community alongside photographer Ingrid Pollard. She also featured in the exhibition Transforming the Crown: African, Asian and Caribbean Artists in Britain, 1966-1996, at the Studio Museum in Harlem.

She had a solo show at 198 Gallery in 1998 which featured a kitchen and bedroom installation along with her grandmother’s extensive wardrobe of hand-crafted aprons. A review published in Third Text notes that “Keegan’s use of video projections adds dreams, thus reminding the viewer of the ways in which dreams act both as raw material and as a site of critical memory and nostalgia”.

By the mid-2000s, Keegan had begun to show her work less frequently – her last solo exhibition, Transformations, was held at the Lewisham Arthouse and the Horniman Museum in 2006. Since then, she has remained on the fringes of the contemporary art world. Many of her peers, such as Boyce, Himid and Forrester, have recently had their “comeback” moments, with institutional recognition after being ignored for decades, but Keegan’s work and legacy has remained relatively uncharted until now, despite her being one of the most significant figureheads in Black art in Britain. It isn’t that Keegan wasn’t actively producing new work but, as she herself pointed out: “There’s very little space for an artist after they get to 50.”

All these images I grew up with, I was not reflected in them. What was in art books did not reflect my experience

Nevertheless, the time for Keegan appears to be here and now. She is featuring in this year’s Royal Academy Summer Exhibition headed by Yinka Shonibare, which for the first time will heavily prioritise the work of African diasporic artists. Both Somewhere Between There and Here and Mirror Reflecting Darkly (which details her childhood, her expansive archive, and her career through a series of intimate essays and interviews) will be key in staking Keegan’s place in history and introducing many people to the work of an important trailblazer.

These projects will also be a chance for those closest to the artist to finally see her shine. Ego Ahaiwe Sowinski, an artist, designer and archivist who has worked with the Rita Keegan Archive Project for six years, wrote last year in a letter to Keegan: “I am so looking forward to finally getting to see your artwork on gallery walls of the South London Gallery in the new year. It is the strangest thing to be so familiar with your work but to have never seen it on walls (other than your own).”

Somewhere Between There and Here will be on view at the South London Gallery from 17 September until 28 November. Mirror Reflecting Darkly is published by Goldsmiths Press on 1 October.