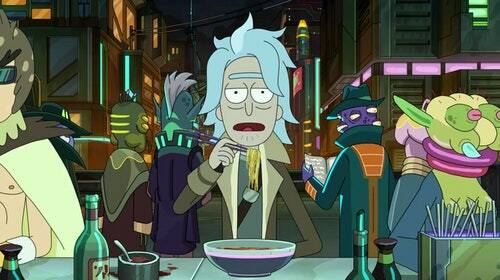 The multiverse as we know it will never be the same on Rick and Morty, at least not after the Season 5 finale “Rickmurai Jack.” In many ways, the episode shattered expectations and answered so many crucial lore questions so it can move forward in a new direction.

What really happened to Rick C-137? What are Evil Morty’s real motives? Here’s a look at some of the biggest questions — and answers — presented by the Rick and Morty Season 5 finale.

Needless to say, major spoilers for all of Rick and Morty Season 5 follow.

In Season 5’s penultimate episode, Rick and Morty essentially break up because Morty used Rick’s portal gun without asking and spilled some portal fluid on his hand. As punishment, Rick instead teams up with “Two Crows” (two very normal crows) while Morty falls in line with a psychopath named Nick with a mini-portal on his leg linked to one on Morty’s hand. However, rather than reconcile in the end, Rick maintains his new relationship with the Two Crows and leaves Morty devastated.

This gets quickly resolved in Episode 10 after the crows abandon Rick. But because Morty aged himself up to blackmail Rick, they must go to the Citadel full of Ricks and Mortys to undo the process. While there, they encounter the Evil Morty, who’s still running the Citadel and explains his nefarious plan to destroy it and fracture the multiverse as we know it.

As part of all this, we get several momentous reveals, including answers to some of the show’s biggest questions. So let’s dig in.

6. What was the Rick and Morty Season 1, Episode 9 brain scan?

Evil Morty finishes scanning Rick’s brain over lunch, but as he points out, he scanned most of it “a long time ago.” That’s when the episode sort of pauses and a Stan Lee-looking Rick pops up in the corner to say, “Check out Season 1 Episode 9, Rickheads!”

This is confusing because we’d normally consider Season 1 Episode 9 to be “Something Ricked This Way Comes” when Jerry and Morty go to Pluto while Summer and Rick deal with the Devil’s cursed antique shop. But as one Redditor pointed out, the production code for Episode 1 in a season is “0” so every subsequent episode’s number is one higher. Therefore, Episode 9 is actually Episode 10: “Close Rick-counters of the Rick Kind.”

That makes a lot more sense because that’s the episode where we first encounter the Citadel and Evil Morty. Rick C-137 is blamed for the murder of multiple Ricks and the abduction of their Mortys, but after escaping, he tracks down the real culprit: “Evil Rick.” At the villain’s secret lair, Evil Rick began downloading Rick C-137’s memories, but he was foiled before he could complete the task.

In retrospect, we now know that Evil Morty made off with the partially downloaded contents of Rick’s memories. Which would explain why the lunchtime download in the Season 5 finale didn’t take that long.

5. What happened to Evil Rick?

“Evil Rick” gets name-dropped several times in “Rickmurai Jack,” so here’s a brief refresher about what happened to him back in Season 1

At the end of “Close Rick-counters of the Rick Kind,” a Morty uprising overthrows Evil Rick while Rick C-137 is imprisoned. Evil Rick is killed by the swarming mob. The main Morty frees Rick C-137, who then calls for more Ricks to clean up the mess. Later, several Ricks investigate the body. Evil Rick’s brain is mostly mechanical, and someone was using advanced technology to control the body remotely.

Immediately after, we see that the receiver was in Evil Morty’s eyepatch the whole time, and he smashes it before heading towards the ships ferrying stray Mortys back to the Citadel. He would of course go on to become the president of the Citadel a few seasons later, but his cyborg Evil Rick is still very much dead.

At some point during “Rickmurai Jack,” Evil Morty finishes scanning Rick’s brain. Like a supersized Mind-Blower vial, the top-looking device contains all of Rick’s memories. First, Evil Morty reveals to Morty the true nature of the Citadel (more on that later), but then Morty uses the downloaded brain to inject himself with Rick’s full “crybaby backstory.”

As it turns out, if you’ve seen the Season 3 premiere “The Rickshank Rickdemption” and Season 5 Episode 8 "Rickternal Friendshine of the Spotless Mort," then you’re all caught up.

The supposedly fake origin story that Rick showed while imprisoned by the Galactic Federation was mostly true: An edgy Rick offers Rick C-137 portal tech, but he declines. That Rick kills Beth and Diane (Rick’s wife) with a bomb. Rick figures out the tech on his own and uses it to go on a universe-hopping killing spree tracking down the killer. We see this unfold in a wordless montage done in the style of Blade Runner, and bits of it overlap with Rick’s memories involving Birdperson revealed in "Rickternal Friendshine of the Spotless Mort.”

Jaded with his life of killing, Rick winds up crash-landing into the garage of a Beth Variant. His original daughter remains dead, but Rick C-137 takes up residence in a reality where he can live with his daughter’s family ... including our Morty. It pretty seamlessly tells us everything we could possibly want to know about Rick’s backstory.

3. Why does the Citadel exist?

Writer/showrunner Scott Marder calls Rick the “founding father” of the Citadel in an Inside the Episode video for “Rickmurai Jack.” Based on what we see in Rick’s memories, he’s pretty much the only founding father.

Rick spends perhaps years trying to hunt down the Rick that killed his wife and child to no avail, descending deeper into a pit of depression and alcoholism. He kills countless Ricks in the process, which only forces the survivors to band together. Out of what looks like sheer exhaustion, he succumbs to a peace treaty with them.

“His killing spree ultimately led to a truce that allowed them to form the Citadel,” Marder adds, “and he’s not proud of that because he wants nothing to do with those guys.”

Evil Morty’s additional revelation is that after Citadel leadership realized that “rogue Ricks” could use Mortys to hide from the Citadel, the Ricks of the Citadel created a “Morty market.” They’d deliberately cause Beth and Jerry to meet so that new Mortys would be bread, and they even resorted to cloning them. (This is how we wound up with the mutant Mortys seen throughout this episode.)

Rick C-137 may have been instrumental in the design and creation of the Citadel, but it seems like the Morty market aspect was more of an aftermarket, if you will.

2. What is the Central Finite Curve?

Late in the episode, Evil Morty refers to the Central Finite Curve as “an infinite crib built around an infinite fucking baby.” The baby, in this case, is Rick.

The term first appeared in “Close Rick-Counters of the Rick Kind.” Someone on the Council of Ricks says, “Of all the Ricks in the Central Finite Curve, you’re the malcontent!” We also know from “Tales from the Citadel” that Simple Rick (the one whose brain makes those snacks) hails from a universe “16 iterations off the Central Finite Curve.” The show never bothered to expand upon the term’s meaning until now.

What is beyond that wall?

1. Where did Evil Morty go?

In the Inside the Episode video for “Rickmurai Jack,” writer Jeff Loveness refers to Evil Morty as a “zoomer growing up in late-stage capitalism.” When he sees how broken the system is, he realizes that society needs to burn. Breaking the Central Finite Curve is, in essence, breaking the toxic symbiotic relationship between Ricks and Mortys.

Part of his plan involves destroying the Citadel, killing countless Ricks and Mortys in the process. But his main goal is leaving the Central Finite Curve. To do that, he uses a device that harnesses Morty and Rick DNA, along with portal fluid, to blast a hole in the wall that isolates the Central Finite Curve from the rest of the multiverse. Doing so creates a singularity that consumes the Citadel, but it successfully allows Evil Morty to blast himself through several boundaries into what’s essentially the wider multiverse.

On some level, this feels like Evil Morty leaving Rick and Morty for good, especially when the finale sort of implies that all of the portal fluid reserves have been destroyed and Rick’s portal gun is broken. Did this process destroy the Central Finite Curve in its entirety? Was the Citadel itself the only thing holding it together? Does this mean Rick is now exposed to a wider and more varied multiverse where he’s not always the smartest guy around?

These are the sorts of questions that Rick and Morty Season 6 can address directly or ignore entirely. This could be an opportunity for the show to become a simpler procedural affair, or maybe it just made things more complex than ever before.

Rick and Morty Season 5 is available now on Adult Swim.