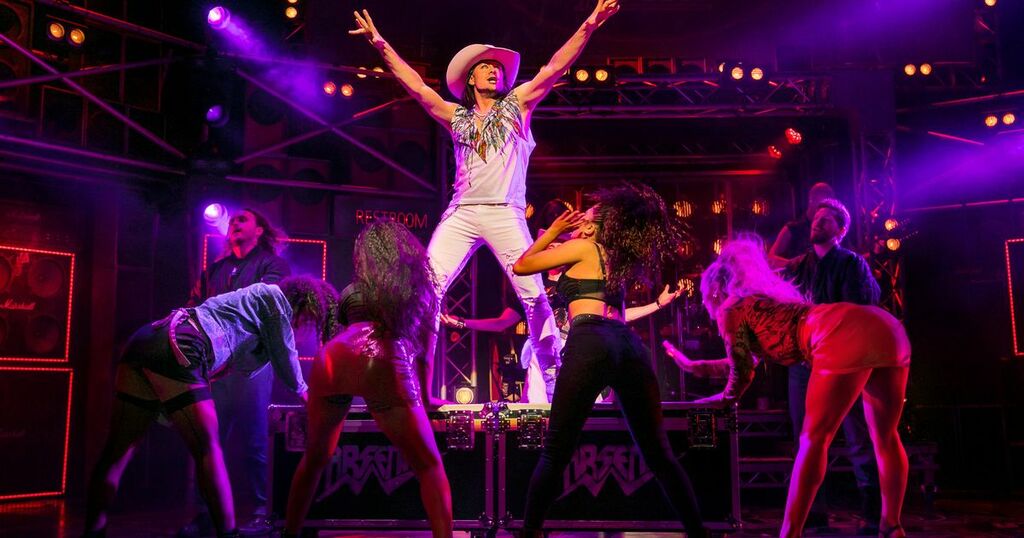 Built around classic rock songs of the 1980s, anyone who has seen a production of Rock of Ages (or, in fact, the 2012 film adaptation), knows exactly what the tone is.

Think 2019’s Met Gala, where the theme was Camp: Notes on Fashion, and you've got the gist.

The show opens with Just Like Paradise/Nothin’ But a Good Time to introduce our lead characters, but the show truly starts when Ross Dawes’ Dennis Dubris strolls on stage looking like an immaculate Woodstock version of Paul Hollywood.

A young cast of classic rockers is all well and good, but the rasp of an older voice is what really makes it.

Anyone who’s familiar with the show will also know that it is steeped in satire; once you let go and embrace the comedy (the realisation usually comes when the child’s toy tractor is ridden on stage), then you can settle back in your seat.

The instantly recognisable stage singing voices are tinged with the grit of 80s rock, particularly when Luke Walsh’s Drew unleashes his ‘rock scream’ for the first time in I Wanna Rock.

But the madness takes a breather when Rhiannon Chesterman’s Sherrie takes the stage with More Than Words.

The crowd work from Joe Gash’s Lonny is also fantastic; it might take you a second to warm to the extravagance, but the minute he picks poor ‘Kirsty’ out of the front row to be his comedic target, we’re all hooked on the act.

The tinge of Moira Rose in his accent is beautifully niche, and will delight those familiar with Schitt’s Creek and those who aren’t.

His solo in Here I Go Again, where he allows more of a raw voice to come out than the carefully crafted stage persona, is a real stand-out moment.

Of course, there is always one actor who does a very good job of stealing the show, and in this case it comes in the form of Jenny Fitzpatrick’s Justice, who struts onto the stage, hand on hip, and absolutely belts Shadows of the Night without batting an eye.

Another shout out to our stand-in Franz: Scott Hayward. Stepping into the shoes with ease, he brings the house down with Hit Me with Your Best Shot, and gets the biggest cheer of the night.

But the biggest laugh of the night came with Can’t Fight This Feeling, where Dennis and Lonny have the audience crying with laughter for so long that they crack up themselves trying to continue with the song.

It’s an undeniably fantastic soundtrack, and exactly what a rock musical should be: camp, crass, and charming.

And with a touching message delivered by Kevin Clifton (Jaxx) on the difficulty theatre has been through for the last year and half, theatre truly is back.