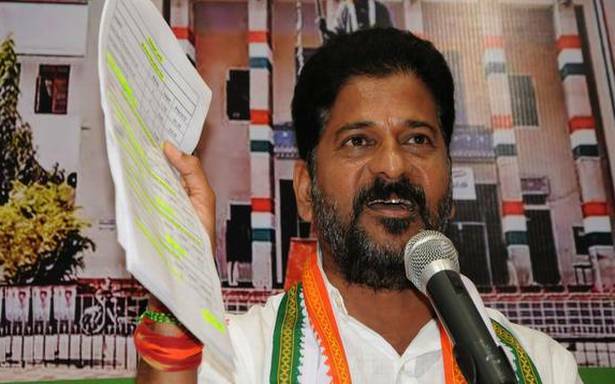 Telangana Congress president A. Revanth Reddy has submitted a letter to the Central Bureau of Investigation (CBI) Director in New Delhi demanding investigation into the recent sale of lands at Kokapet alleging that the government suffered a loss of ₹1,000 crore and also the role of officers involved in the entire process as the beneficiaries were close to the Chief Minister K. Chandrashekhar Rao.

In the letter, Mr. Reddy claimed that a Government of India PSU, MSTC helped certain public servants of the Telangana government in ensuring that only a few companies could bid. The previous record of MSTC in the manipulation was well-known given cases booked against its officials by the CBI.

The Congress chief alleged that two real estate groups of Hyderabad – Rajapushpa Group and My Home Group garnered a major share of the land while a portion of it was taken by the brother of a ruling party MP. The huge price variation in the plots bought at the same place indicates that the sale was not fair. While one plot was purchased at ₹60.2 crore while the plot beside it fetched ₹31.2 crore only. The entire extent of 50 acres was purchased by either Rajapusha Group or My Home Group, he said.

The Congress leader also claimed that officials had dissuaded many bidders not to participate in the auction using their power. Both these groups had also earlier obtained hundreds of acres in the IT Hub of Hyderabad at highly discounted prices and through questionable deals, he alleged.

In his complaint, Mr. Reddy claimed that MSTC, being the intermediary, did not reveal the names of the bidders of Neopolis, Kokapet, Golden Mile, who participated in the auction and the entire bidding process was shrouded in mystery. No information was shared with the public about other bidders.

The Congress leader argued that choosing MSTC leaving aside the Telangana government’s e-auction platform that was more transparent and ensured secrecy of the bidders, was itself questionable. The entire process, therefore, requires thorough investigation and forensic examination of the MSTC platform and the event, along with IP verification details, will establish the role played by the public servants.