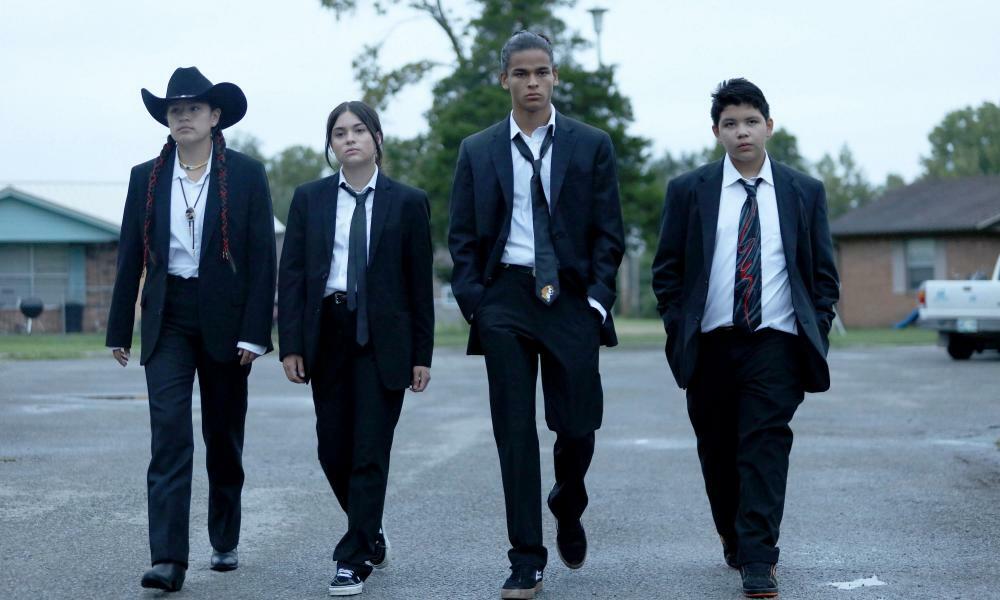 No more satisfying a setting for a TV show than “scratched-out craptown peopled by criminal-leaning eccentrics”, is there? That was the exact formula for Shameless, then Shameless again, but (and this is a non-exhaustive list) it always broadly works: Brassic, My Name is Earl, Trailer Park Boys, This Country in a way, quite a lot of Ozark, when you think about it, and if you really want to lean in then all the Maeve sections of Sex Education. Essentially, whenever there are a lot of one-storey buildings or static homes, and a lot of people ambling around using a slightly alternative mode of transport (a BMX! An electric scooter!), and someone has hacked a way to steal at least one of their essential services (TV, electricity etc): there lies intrigue. There lies comedy, somehow.

To Reservation Dogs, then, the new Taika Waititi show that takes that theory and runs with it. The broad outline is this: four indigenous teenagers on a run-down reservation perform petty crimes and money-making schemes with the ultimate aim of filling a single envelope marked ‘CALIFORNIA’ with enough cash to blow this joint. This, in the wrong hands, could be quite dull – What Is the Crime This Week? I Can’t Imagine It’ll Go Smoothly. Oh Look It Didn’t. Oh Well There’s Always Next Week – but a lot of elements really come together to make this one sing.

First is the looming presence of Waititi, who has become Hollywood’s go-to weirdo-in-chief. For that, we really must thank whichever Marvel executive went dramatically off-piste and suggested he direct Thor: Ragnarok. Before I get any emails about this: I do know Waititi existed before Thor: Ragnarok. You don’t know the hoops I jumped through as a young Flight of the Conchords fan to watch Eagle vs Shark when it came out. Hunt for the Wilderpeople was also fantastic, and the original What We Do in the Shadows. However, all the pre-Thor work was good, but very much for “men in their 20s who make a big show of ordering an Old Fashioned at the bar”. But now, after the success of a Marvel mega-hit he’s able to, say, make Jojo Rabbit, or direct episodes of The Mandalorian, or get off with Rita Ora and Tessa Thompson at the same time, and wider culture will pay attention to it. We have all become Waititi-pilled, and that can only be a good thing going forward.

Waititi’s brand of just-right weirdness is all over Reservation Dogs (Disney+, Wed), which lives in a setting never really seen before on TV: a rural Oklahoma reservation, the kind of listless place where four teenagers can sit on a sofa in the middle of an abandoned building and do rubbish graffiti everywhere unchecked, because all the adults around them are working too many survival jobs to really notice. “Teen who doesn’t want to be here experiences malaise” is a central theme to about one-eighth of all stories ever told on film and TV, but the young cast are incredible and the number of weirdos around them keep things constantly fresh.

It is quite astounding that casting managed to find four young actors who nail this one so well – D’Pharaoh Woon-A-Tai is the gang’s movie-star good-looking leader Bear, who is slowly moving away from “impulsively doing whatever he wants” to “impulsively doing whatever he wants slightly less often”; Kawennáhere Devery Jacobs as the smart-but-uncaring Elora, who is laser-focused on leaving this town for ever. They are joined by Paulina Alexis (the tough-but-fair Willie Jack) and Lane Factor (the dumb-but-dumb Cheese).

But it’s their glancing interactions with the adults around them that really make the show. A particularly innovative episode set in the interminable wait for A&E pits them against Bobby Lee as a completely-over-it doctor; Kirk Fox’s Kenny, the peace-preaching owner of the local cash-for-cars-no-questions-asked scrapyard, is always a highlight; it is never not funny to see them in scenes with Lil Mike and Funny Bone, who play the all-seeing reservation demi-gods, Mose and Mekko. Reservation Dogs’ funniest moments are its weirdest though: after various head injuries, Bear experiences trope-inverting visions of warrior ancestor Spirit, (played by writer Dallas Goldtooth), scenes I found myself rewinding – rewinding! – to watch over again. Sure, you’ve seen bored kids shoplift from convenience stores before. But the extra sheen of elegant strangeness elevates Reservation Dogs to something much more.