Republicans’ Emerging Defense: Trump’s Actions Were Bad, but Not Impeachable

WASHINGTON — Even as they are set to acquit President Donald Trump in his impeachment trial this week, Senate Republicans appear to be increasingly breaking with his defense that he did nothing wrong.

On Sunday, Sen. Lamar Alexander of Tennessee, who was a key vote against calling witnesses in the Senate trial, expanded upon his criticism that Trump was “crossing the line” in his pressure campaign against Ukraine. And Sen. Joni Ernst of Iowa, who has remained a reliable defender of the president during his trial, called his actions “not what I would have done.”

A day before the first contest of the 2020 election, two days before Trump’s State of the Union address and three days before his expected acquittal, they and other Republicans appeared to be coalescing around a more nuanced argument: Trump’s efforts to push Ukraine into investigating a political rival while withholding critical military aid might not have been appropriate. But that did not warrant the president’s removal from office for the first time in American history.

“I think he shouldn’t have done it — I think it was wrong,” Alexander said Sunday on “Meet the Press” on NBC. “Inappropriate, was the way I’d say it. Improper, crossing the line. And then the only question left is: Who decides what to do about that?”

Alexander first took that position last week, when he announced that he would vote against the consideration of new witnesses and documents in Trump’s trial. He acknowledged the merits of the House case for removing the president on charges of abuse of power and obstruction of Congress: that the president had withheld nearly $400 million in military aid to pressure Ukraine to investigate former Vice President Joe Biden and his son Hunter.

But Alexander’s decision was in part influenced by the proximity of the election. (When pressed about how he would have voted outside an election year, he said he most likely would have arrived at the same conclusion.)

“I don’t think it’s the kind of inappropriate action that the framers would expect the Senate to substitute its judgment for the people in picking a president,” he said Sunday.

That argument has come under fire from Democrats, who say the nature of Trump’s offense — trying to persuade a foreign nation to interfere in the 2020 race — could compromise the election.

“They need to remove him from office because he is threatening to still cheat in the next election by soliciting foreign interference,” Rep. Adam B. Schiff, D-Calif., and the lead House impeachment manager, said Sunday on “Face the Nation” on CBS. “And so the normal remedy for a president’s misconduct isn’t available here because the elections, he is already trying to prejudice and compromise with further foreign interference.”

The Republicans’ argument also stands starkly at odds with what Trump — who has deemed a phone call he had with Ukraine’s president “perfect” and has resisted any suggestion that he acted improperly — has demanded from his defenders.

But Alexander’s reasoning was echoed by multiple Republicans who voted against allowing new witnesses and documents in the impeachment trial. “Lamar speaks for lots and lots of us,” said Sen. Ben Sasse, R-Neb.

Among them is Ernst, who has repeatedly said the scrutiny over Hunter Biden’s work for an energy company in Ukraine — the basis for the investigation Trump had demanded — could affect the presidential campaign of the elder Biden.

“I think, generally speaking, going after corruption would be the right thing to do; he did it maybe in the wrong manner,” Ernst said Sunday on “State of the Union” on CNN. “I think that he could have done it through different channels.”

But she added that “whether you like what the president did or not,” the charges did not clear the bar for removing him. “Does it come to the point of removing a president from office?” she said. “I don’t believe this does.”

Sen. Rob Portman, R-Ohio, said in a statement late last week that while some of Trump’s actions were “wrong and inappropriate,” they did not “rise to the level of removing a duly-elected president from office and taking him off the ballot in the middle of an election.”

“Just because actions meet a standard of impeachment does not mean it is in the best interest of the country to remove a president from office,” said Sen. Marco Rubio, R-Fla. (He later added on Twitter that he did not find either of the two articles of impeachment brought against Trump to be proved beyond a doubt.)

Even one member of the president’s defense team seemed to adopt a similar argument. As he continued to walk back remarks he made during the trial that suggested a president’s actions in pursuit of reelection were inherently in the country’s interest, Alan M. Dershowitz, the constitutional law scholar, said that actions that might be wrong might not be impeachable.

“On Election Day, as a citizen I will allow that to enter into my decision who to vote for. But it’s not an impeachable offense,” Dershowitz said on “Fox News Sunday.” “I was there to argue a constitutional issue, not to tell people who to vote for, for president.”

With nine months left in the campaign, Alexander said he hoped that the consequences of Trump’s phone call with Ukraine — becoming the third American president to stand trial for high crimes and misdemeanors — would resonate with the commander in chief. 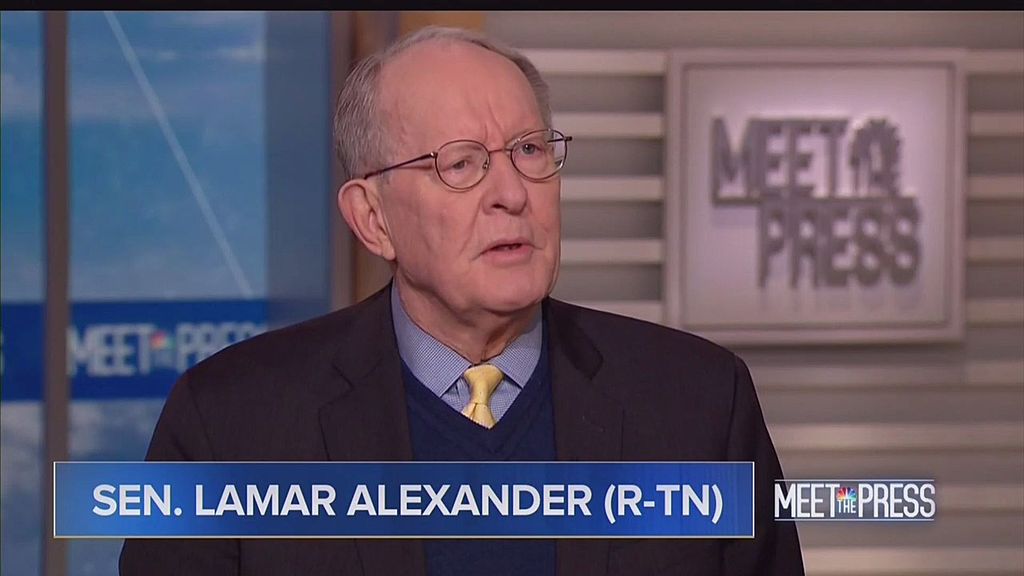 GOP Sen. Lamar Alexander says House proved Trump withheld aid to pressure Ukraine
But Alexander said the consequences should be determined at the election, not via impeachment.

Axios
One subscription that gives you access to news from hundreds of sites
Schiff in closing impeachment arguments: Trump "will not change and you know it"

Some Republican senators have suggested that Trump has learned his lesson about foreign election interference.

Growing number of Republicans say they will vote to acquitRobert Reich: Democrats share blame for the rise of TrumpMartin O’Malley:…