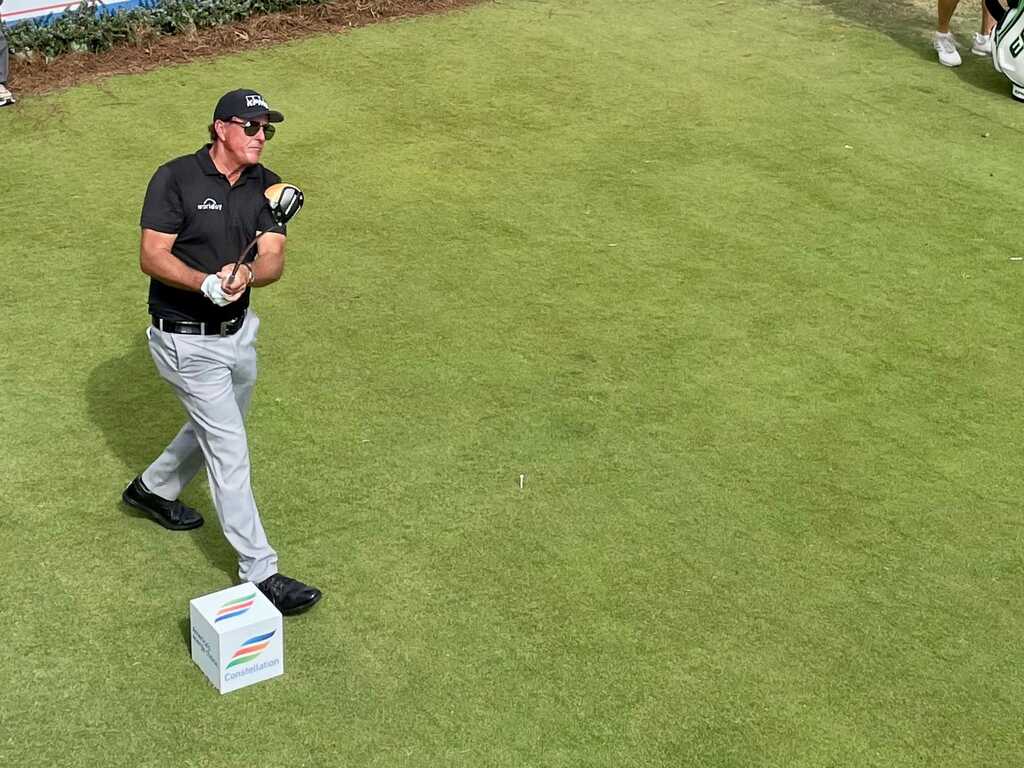 JACKSONVILLE, Fla. – A sudden early-fall Florida thunderstorm on Friday prevented fans from seeing the best of what a star-studded field had to offer in the first round of the PGA Tour Champions Constellation Furyk & Friends.

But there’s nearly perfect weather coming up for the final two rounds this weekend at the Timuquana Country Club, fans are welcome back and these guys are just getting started.

Mickelson saved par on a 12-foot putt at the par-3 17th hole after pulling his tee shot into a deep patch of rough on a sloping bank, then did well to make a bogey at the par-4 18th after nearly driving his tee shot out-of-bounds on the left.

Just inches from the white line marking OB, Mickelson punched out, wedged to within 15 feet and left a par-putt attempt on the left edge.

“I hit a few wayward shots,” said the first reigning major champion to ever play in a PGA Tour Champions event. “I just didn’t feel great but fought to finish the round off and try to regroup for [Saturday]. It’s a good start, though. I didn’t do any damage and made some good birdies on that front nine.”

Frank Lickliter II of nearby Ponte Vedra Beach, Florida, fought back after two consecutive bogeys when he returned from the delay and played the rest of his round at 3 under with no more blemishes to record a 5-under 67, matching Cameron Beckman.

“I’ve probably played this place, 40, 50 times … Gator Bowl [Pro-Ams] … I’ve always liked it,” said Lickliter, a two-time PGA Tour winner who is still searching for his first Champions Tour top-10 after 18 starts. “I was playing good, then after the storm, came back and made two bogeys in a row, immediately. But I settled down and made birdies coming in … I’ve been making birdies again this year.”

The eight players tied at 4-under are a mix of major champions and journeymen, led by World Golf Hall of Fame member and Schwab Cup points leader Bernhard Langer, plus past major winners Darren Clarke and David Toms.

“No wind and the greens are fantastic to putt on, so if you get it going, you can hole a lot of putts,” said Robert Karlsson of Sweden, one of the players who posted a 68. “But they’ve done a good job with the pins, there’s a few tough ones in there, especially on the back nine. But it’s very enjoyable.”

The tournament was halted at 11:50 a.m. because of approaching weather and the severe storm and lingering lightning forced tournament officials to send fans home and close the gates.

However, the field was able to return at 3 p.m. and with the sun breaking out, virtually no wind rustling the pine needles of the historic course, the players performed with only themselves, family members and a few media watching.

They put on a show. Mickelson made three birdies after his return, Gogel birdied four of his last five holes, Beckman birdied three of four at one point and Kevin Sutherland ran off five birdies in a row to get a share of the lead before a closing double.

Nineteen players shot in the 60s and 34 broke par, and most of the birdies came after the rain softened the slick greens.

Despite posting his seventh score in the 60s in 10 career Champions Tour rounds (he won his first two starts last fall), Mickelson, predictably, was kicking himself for not squeezing more out of his day.

“Granted, the golf course is challenging here and there’s some spots you’ve got to be careful,” he said. “But for the most part it’s just really fun being out here and playing fewer holes and being able to play aggressive, kind of like the way I like to play. It’s been fun the few events I’ve played.”

The field averaged 72.185 in Timuquana’s first round in hosting a major professional tour.

“They [the maintenance staff] did a great job getting the course ready, and draining it so quickly so we could go back out and play,” Mickelson said.