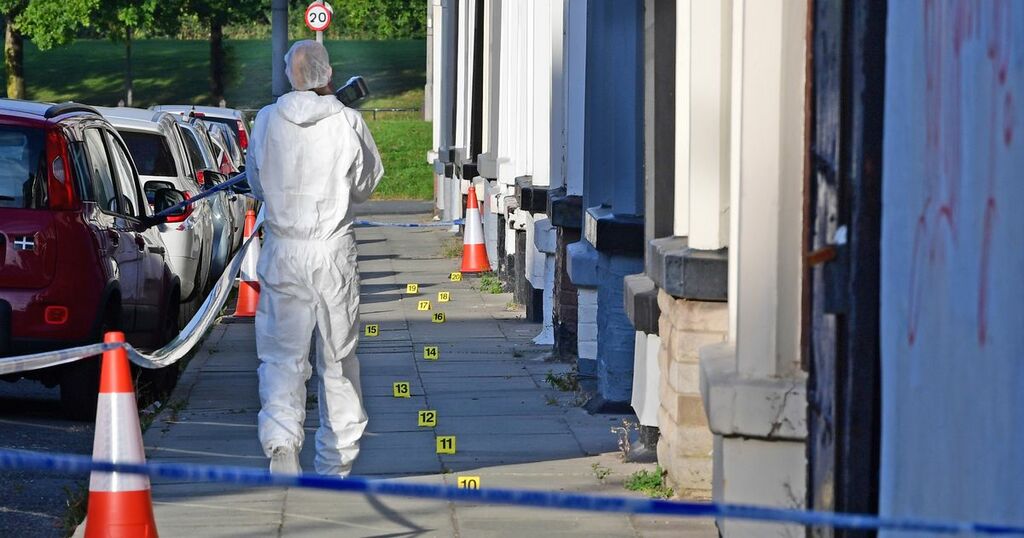 A street shooting that left two men injured came in an area already identified as a target for action by police.

Shots fired on Stanley Road in Kirkdale woke those living nearby last night and left a trail of blood that was studied by forensics officers on Wednesday morning.

The attack was carried out on the fringe of the Flower Streets, a network of residential roads where work to target drug dealing and anti-social behaviour were stepped up just six weeks ago.

Read More: Men pouring with blood turn up at Royal Hospital after shooting in street

The shooting, which saw multiple handgun blasts that left the victims with leg and hand injuries, unfolded just before 1am on Wednesday.

It was the first gun attack in Kirkdale that the ECHO is aware of in more than a year.

But several gangs linked to gun crime are known to have links to the area, while the Flower Streets are currently the scene of intensified efforts to tackle drug dealing and the trouble thath can be associated with it.

In July, city-based authorities - including Liverpool Council and Merseyside Police - launched a project called Safer Streets with a specific focus on the area.

The work that has followed was funded with the help of Merseyside's Police and Crime Commissioner Emily Spurrell, who said at the time: "This initiative is fantastic news for people living in the Flower Streets.

"No-one should feel unsafe in their home or the area where they live, but sadly the community here have had their lives blighted by crime, particularly drug-dealing, and anti-social behaviour in recent years."

The Safer Streets initiative takes a two-pronged approach to improving an area. Work to fix CCTV, street lighting, clean up rubbish and remove graffiti is designed to make the area safer and create opportunities for officials to build trust among the vast majority of law-abiding residents.

Meanwhile, it is hoped police work targeting suspected troublemakers will re-inforce that trust by showing officers are willing to act on information provided by those willing to come forward.

Since July this has led to graffiti being removed and rubbish cleared from the streets, while last week raids linked to drug dealing investigations were carried out and a nearby stretch of the Leeds Liverpool Canal was examined by Merseyside Police's Underwater Search Unit. Ammunition was found by the police divers.

The Safer Streets initiative has led to success in other parts of Merseyside where such an approach has been adopted. Speke, formerly a gun crime hotspot, went four years without a shooting before a gun blast earlier this summer.

The success was credited to grass roots work providing a platform for more targeted police activity that removed a major Liverpool gun gang from the streets of the area - with hidden weapons and drug safe houses identified and dealt with in the process.

The Stanley Road attack means that just over a dozen shootings have been recorded on Merseyside since the beginning of June - a slight increase on the same period of 2020, when Coronavirus restrictions had some impact on the movement of criminals, but well down on the same timeframe across each of 2017, 2018 and 2019.

A combination of the pandemic, criminal investigations linked to the hacking of communications platform EncroChat and the formation of Merseyside Police's specialist Firearms Investigation Team in January 2020 are all believed to be factors in the reduction.

Detective Inspector John Fitzgerald, from that unit, pointed to recent gun seizures in Croxteth, Netherley and Southport as he appealed for information over the Kirkdale shooting.

He said: "We’re working to piece together exactly what happened and so are keen to speak to anyone who was in the vicinity of Stanley Road and Pansy Street around midnight and saw or heard anything, either the shooting itself or any people making away from the area, and vehicle details.