A rarely seen giant squid described as an "amazing ghost creature" has been found washed up on a beach.

The huge creature was discovered washed up on the shore of Scarborough Beach in South Africa's Western Cape on Tuesday.

The giant squid's tentacles and large eye can be seen in pictures and video posted on social media, while a marine biologist revealed the dead cephalopod's sharp, black beak.

The beak, which is comparable to one of a parrot's due to its shape, is used by the animal to bite fish and ingest prey and other food when it's deep-water hunting.

Giant squids are one of the most elusive creatures on the planet, living at depths between 300-1,000 metres and very rarely are seen coming to the surface.

Tim Dee, an author from Bristol, was birdwatching in the area and decided to go see the creature after it was posted on a local community group earlier that day.

Mr Dee said: "I am a birdwatcher and always looking at the beach and shore here at Scarborough. We're only a few miles north of the Cape of Good Hope - the southwesternmost point of Africa.

"All sorts of oceanic oddities turn up, dead and alive. The giant squid was first found by dog-walkers early in the morning.

"They posted a picture on a village wildlife message board we share. I hurried there as soon as I heard.

"And I knew that this one was not seeing anything anymore even as it looked up at the sky of Scarborough. And then to see the squid's arms and tentacles and that strange mouth being articulated was strangest of all.

"The movie Alien came to mind - those nested teeth in the centre of the monster's head and here was that alien on the beach just beyond the bottom of my garden.

"There was a pilgrimage to the stranded animal all through yesterday; the IZIKO museum in Cape Town came and took samples for its Marine Invertebrates collection."

Giant squids are said to grow to a "tremendous size" and according to National Geographic, remain largely a mystery to scientists despite being the "biggest invertebrate on Earth."

The largest of these rare giants ever found measured 59 feet in length and weighed nearly a tonne and despite not knowing an exact range, carcasses have been found in ocean's right across the world. 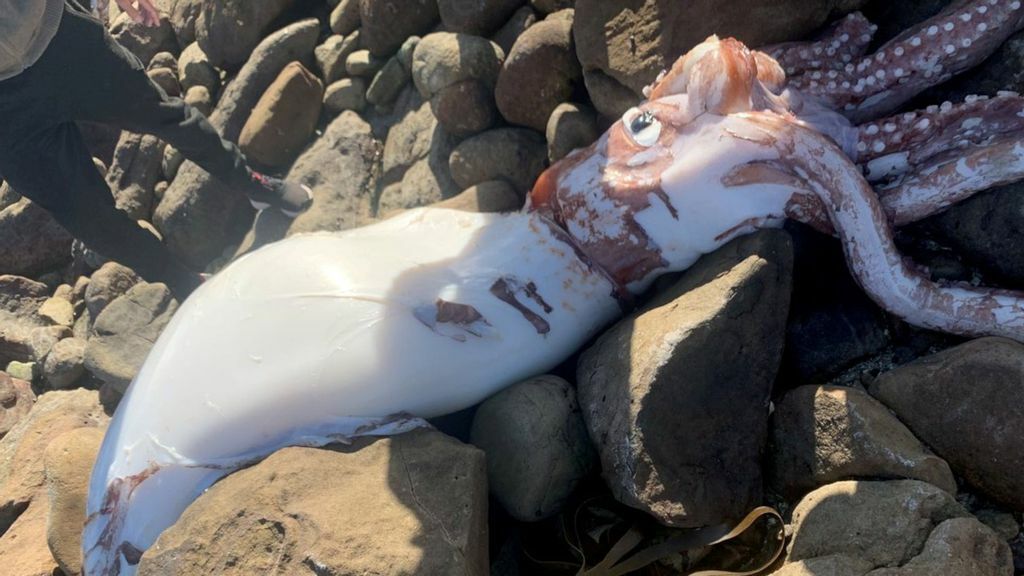 Monster Squid Comes Ashore
A marine biologist is seen moving the squid's tentacles and arms to reveal its beak.

Zenger
From analysis to the latest developments in health, read the most diverse news in one place.
Shark spotted along shoreline by UK country estate is same type that bit snorkeler

The six foot blue shark spotted in shallow waters off a Cornwall beach has raised concerns about its health, weeks…

Same species of shark that bit woman earlier this month

Juvenile snailfish living on an iceberg in Greenland create an antifreeze protein in spades, which allows them to live in…

Inverse
One place to find news on any topic, from hundreds of sites.
Tangled politics: why shark nets are still being used on NSW beaches