Two Rangers fans who hadn't seen each other in more than 15 years have rekindled their friendship after bumping into each other in a pub in Seville.

Jake Quinn, 55, and Gary Craig, 56, grew up together in the East Lothian town of Dunbar and remained firm friends for years.

However, the pair lost contact years ago as life got in the way - and Gary moved to Dublin, where he works as a pipefitter.

Both Ibrox fans travelled to Seville to cheer the Gers on at Wednesday night's Europa League final against Eintracht Frankfurt, and by pure luck stumbled upon each other in a local boozer.

Jake said: "I came over to Seville on Monday, and was trying to check into the apartment I've rented, but it wasn't going to be ready for another hour.

"I decided I'd go somewhere to get a drink and literally the first bar I walked into, there he was - my friend I haven't seen for almost 20 years!"

Quoting a classic line from movie Casablanca, he quipped: "Of all the pubs in all the towns in the world, I had to walk into his!"

Gary and Jake last saw each other at John Muir Country Park in Dunbar over 15 years ago - but the two pals have picked up right where they left off.

Jake added: "It's like it's been no time at all. I didn't even know Gary was coming.

"We didn't even have each other on Facebook, but we've already fixed that."

Gary, who works with veterans support charity Waterloo Uncovered, added: "I couldn't believe it - this guy walks in and I turn around and go: 'You!'

"We haven't seen each other for so long - and then here we are together again in Seville."

Jake believes he and Gary's "fairytale" reunion is matched only by the Gers' potential for a European victory over Frankfurt on Wednesday night.

He opined: "It's important Rangers bring the trophy home. It's unbelievable what we've clawed back in a decade. It's a proper fairytale story."

Around 5,500 Spanish cops and private security officers are keeping the peace in the city this week as 100,000 Rangers supporters and 60,000 Frankfurt followers converge on the south-western city.

For those who haven't been able to get over to Seville to witness the potentially history-making tie, BT Sport has pledged to make the game free to watch via their YouTube channel. 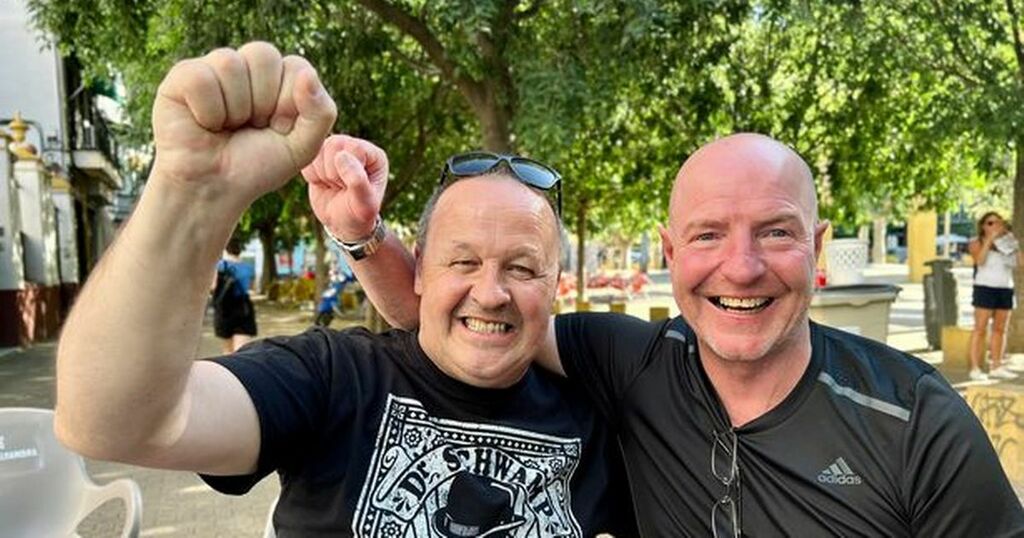 East Lothian Rangers fans reunited by chance after 15 years in Seville pub
Jake Quinn and Gary Craig grew up as best pals in Dunbar, East Lothian, but life eventually got in the…

Edinburgh Live
One subscription that gives you access to news from hundreds of sites
Rangers fans in Seville RECAP: Top headlines ahead of Europa League final

Here are the headlines to catch you up ahead of tonight's match.