Rangers put their European disappointment behind them as they battled to a 2-0 win extra-time win over Hearts to lift the Scottish Cup.

The Gers were left devastated by their 5-4 penalty shoot-out defeat in the Europa League final to Eintracht Frankfurt on Wednesday night and they went into extra-time again thanks to Craig Gordon’s save with his foot from Joe Aribo near the end of normal time at Hampden Park.

However, Rangers dug deep yet again and the Hearts goalkeeper could not keep out a thunderbolt from Ryan Jack after 94 minutes before fellow substitute Scott Wright fired in a second three minutes later to take the trophy back to Ibrox for the first time since 2009.

Giovanni Van Bronckhorst won the cup playing with Rangers in 2000 and captured his first trophy as Ibrox manager having taken over from Steven Gerrard last November and it was well deserved.

Referee Willie Collum’s whistle punctuated the opening minutes and - amid a series of fouls - Hearts midfielder Peter Haring picked up a booking for a challenge defender Calvin Bassey.

In the tenth minute, on-loan Hearts striker Ellis Simms slid in to knock a cross from Boyce against the outside of McLaughlin’s post and behind.

Rangers grew into it and Arfield’s shot was saved by Gordon before winger Kent curled a shot wide, before Aribo’s near-post header from a Bassey cross just did not have enough contact to bother the goalkeeper.

Diallo, for his part, got too much on Bassey’s cross moments later and the ball flew over the crossbar, leaving the first-half goalless.

In 57th minute, Gordon rushed from his goal to thwart Kent, who had latched on to a long ball by Diallo, who was soon booked for a foul on Boyce before he was replaced by Wright.

The prospect of extra-time became stronger.

Balogun headed a James Tavernier corner just over as Rangers finished strongly and Gordon’s instinctive save with his foot from Aribo’s drive in the closing seconds was game-saving, before Wright hit the crossbar with a header from a Tavernier free-kick.

Aribo headed a Bassey cross over early in extra-time but Jack’s strike from outside the area, after Halkett had cleared a corner, gave Gordon no chance as the ball went flying past him and going in off the crossbar.

Then, in a swift Gers break three minutes later, Wright took a well-weighted pass from Kent on the break and drilled a shot low past Gordon to again spark wild scenes of delight in the blue half of the stadium.

Gordon saved from Rangers substitute Fashion Sakala in the second period of extra-time before 40-year-old number one goalkeeper Allan McGregor took over from McLaughlin in the final seconds, presumably for a goodbye appearance.

There was time for Gordon to make further saves from Kent and Kamara, before the cup was adorned in blue, white and red ribbons for the first time in 13 years. 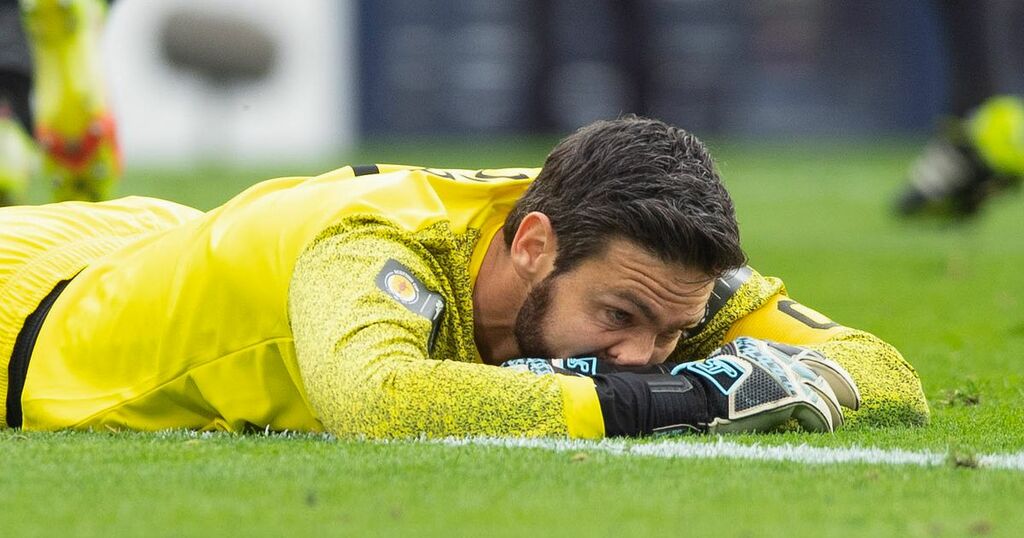 THE pain of their defeat in Seville on Wednesday night will linger for some time to come for Rangers.

The Light Blues lifted the famous old trophy at the national stadium, just days after losing out to Frankfurt on…