There's a rainbow in our universe, though it's far from the type that form long after showers have ceased pouring here on Earth. Scientists have discovered a jaw-dropping rainbow-hued cloud of gas out in space surrounding a pair of stars that had some sort of previous confrontation as they butted heads hundreds of years ago. The binary star system, dubbed HD1011584, was discovered thanks to the Atacama Large Millimeter/submillimeter Array (ALMA), by way of the European Southern Observatory. According to the ESO, it appears that this stunning visual effect is the result of one of the stars growing so large that it simply ended up engulfing the other,.

As the larger star continued to grow and devour the smaller one, the smaller star quickly spiraled toward its larger counterpart, which caused the larger star to begin shedding its outer layers. Those outer layers began spinning up the clouds of gas as seen in the new images of the rainbow phenomenon. This is unusual, as when this typically happens to larger stars, particularly those that burn through the hydrogen at their core, we're left with enormous red giant stars. Red giants are dying stars in their last phases of evolution. In fact, our very own sun will eventually turn into one in a few billion years and will very likely start pulling in the planets in our solar system, including Earth.

When red giants die, however, they'll leave behind a hot, dense object known as a white dwarf. In terms of HD101584, however, its evolution was "terminated prematurely and dramatically as a nearby low-mass companion star was engulfed by the giant," according to astronomer Hans Olofsson, from Chalmers University of Technology in Sweden. Olofsson offered his thoughts on the star pair, indicating that as the smaller star barreled toward the larger one, jets of gas formed, and that propelled any of the material formed by the red giant out into space. This, in turn, created red and blue material as seen via the ALMA images. Together, the propulsion ended up making a rainbow.

The smaller star continued to close in on the red giant, but it stopped short of reaching the core. That explains the pair's closeness in the colorful photos as seen in the ALMA footage.

"Currently, we can describe the death processes common to many sun-like stars, but we cannot explain why or exactly how they happen," said Sofia Ramstedt, astronomer at Uppsala University in Sweden, in a recent statement. "HD101584 gives us important clues to solve this puzzle since it is currently in a short transitional phase between better studied evolutionary stages. With detailed images of the environment of HD101584 we can make the connection between the giant star it was before, and the stellar remnant it will soon become."

If only every space-centric anomaly like this one were so captivating and colorful – this truly looks like a manmade structure painted with digital color. 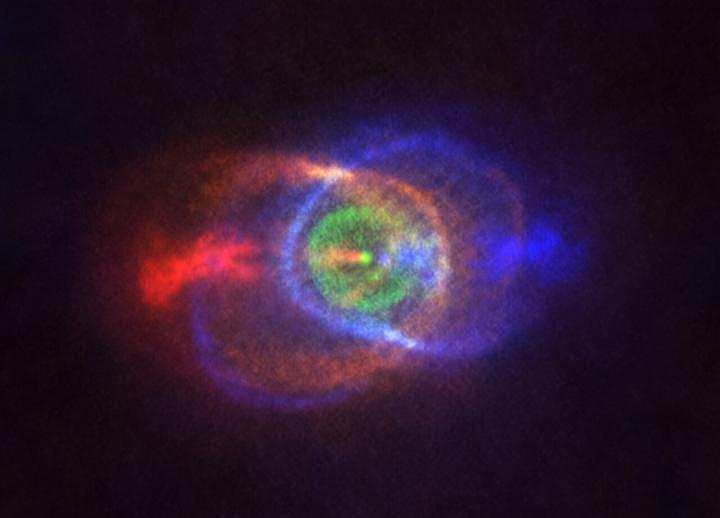 The Independent UK
One subscription that gives you access to news from hundreds of sites
Ask Ethan: Will The Earth Eventually Be Swallowed By The Sun?

The Sun will eventually become a red giant star, swallowing Mercury and Venus in the process. But what will happen…

A galaxy cluster can be likened to a great city of galaxies, a galactic conurbation where each galaxy represents an…

The Conversation
Pluto doesn’t just have a heart, the damn thing is beating!

The New Daily
Stargazing in February: Is Betelgeuse about to blow?

The Independent UK
One subscription that gives you access to news from hundreds of sites
Will Humanity Achieve Interstellar Travel And Find Alien Life?

Two of our biggest science-fiction dreams might not remain fiction for much longer. Here's how 21st-century science could make it…