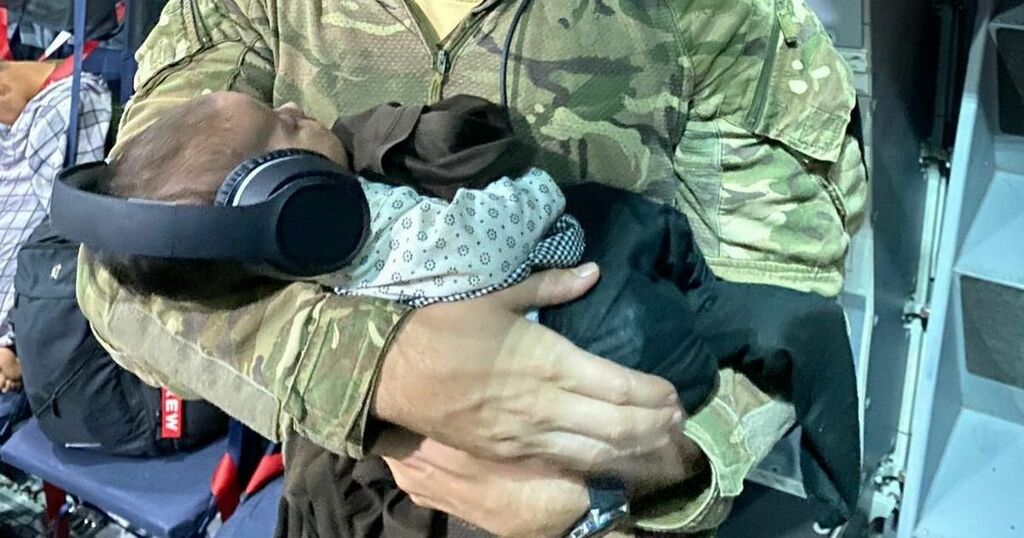 A hero RAF Sergeant on one of the last mercy flights out of Kabul has told how he held an Afghan baby girl for an hour because her mum was so exhausted she could no longer keep her safe.

Load master Andy Livingstone, from Scotland, saw the baby fall from her mum's arms during one of the last evacuations out and shortly after the blast that killed 170.

His RAF flight was carrying 153 locals fleeing brutal Taliban rule, in fear for their lives and many barely able to stand from shock and sheer exhaustion.

The Scots 31 year-old married father-of-two was in charge of loading people and things onto the RAF flight in the final hours of the historic Kabul evacuation.

In an emotional interview Sgt Livingston, of 70 Squadron, recalls: “We got everyone on and this family caught my eye, a mum and dad, three sisters and a brother.

“One of the sisters was in the early stages of shock or exhaustion, so without any medics there we just cracked on giving her food and I was dealing with dad, ensuring he was able to give food and water to his family.

“A little little bit later on I see something in the corner of my eye falling over on to the floor. I saw the mum scrambling and realised a baby has rolled off her lap.

“She was just so exhausted, she couldn’t keep her eyes open couldn't keep her arms up.

“I gave her the baby back, asked a few questions, strapped the baby in, best as I could using seat belts just to hold it in.

“Within minutes of that it was the same again. I see the same thing happening.

“I just did what anyone else would have done. I've got two little girls myself and you just want to help.

“So I went over and said you really need to sleep - please let me take this baby off you for half an hour just so you can shut your eyes – anything that will make you feel better.”

The traumatised Afghan lady looked into his eyes, unable to communicate.

Sgt Livingstone recalls: “I cannot say there was gratitude, she was a woman who had seen her family go through too much, looking at me as if to say 'is it okay? Can I go to sleep now? Is my baby going to be okay with you?'

“I will never forget it... I don't think I can describe it in a way that makes sense.”

The RAF Sergeant held the little baby for an hour on the flight that was so packed he did not have a seat, as he grabbed cargo strapping for balance during the two hours to Dubai.

He says: “This baby weighed absolutely nothing and you think how exhausted must this poor woman be that she cannot bear that weight.

“We put headphones on the baby as its a noisy aircraft and let the little girl sleep for an hour whilst the mum had a kip as well.

“It was no problem - anyone would have done the same to give her a bit of respite.”

He now describes the hazardous three mercy flights he took part in as the most rewarding of his 10-year career, serving all over the world.

He says: “It's easy to see numbers when it comes to refugees and all the labels but as as soon as they were on and you had a good look

“It was just people. People had their little girls in their best party dresses and little boys in their nicest clothes, their good shoes.

“We were just trying to make it less difficult, nans were handed out sweeties and dads were doing the dad thing, making sure the kids were just sitting down.

“Mums were just trying to look after kids.

“Everyone was doing what they could do and I thought if that was my family what would I want?

“What could I do to make that couple of hours a bit less scary?

“These are families that have got just one bag packed for a family, one backpack for five of them all they need is a little bit of humanity.”

When he eventually handed the baby back to her mother he says the contact with the Afghan lady was “non verbal” and “all nods and smiles".

His flight was packed with many people who still bore the wounds and cuts from the earlier suicide blast.

“All these children, after all that they have been through, have got smiles on their faces - they just want to be children – you superimpose that on your own life.

“It really does break your heart and there are no words to describe how humbling it is and how appreciative I am of the life that I lead.

“Bringing the Afghan nationals back was the most rewarding thing I have done in 10 years just knowing that you made a difference.

“There were two week old babies grandmothers in wheel chairs, people on stretchers, people with cuts on their arms and head from the blast - people at their lowest ebb.

“These were families desperate to stay together.”