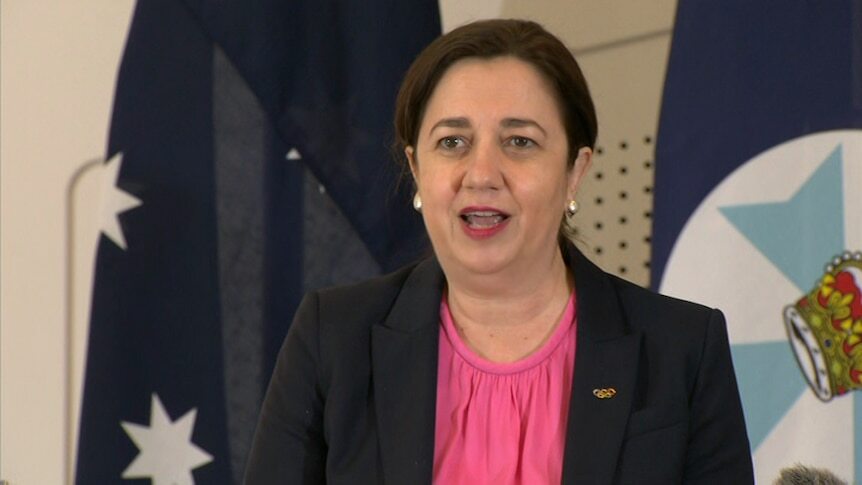 Two Brisbane school students have tested positive to COVID-19 but Premier Annastacia Palaszczuk says authorities are a "lot more comfortable" about the state's most recent outbreak.

Ms Palaszczuk said the local cases were detected in 15-year-old students from St Thomas More College, which was linked to a family of five in Sunnybank that contracted the virus.

The Premier described the cases as low risk and said they have been in home isolation.

Ms Palaszczuk thanked the 1,000 families from the Sunnybank school currently holed up in 14 days home quarantine.

"We are thanking you for doing the right thing for Queensland," she said.

"We saw how well it worked in the Indooroopilly cluster when everyone did the right thing."

"Now we ask every one of those families, because as we can see, we are seeing a few cases pop up from that cluster but they are in home quarantine."

Queensland's Chief Health Officer Jeannette Young said of the two new locally acquired cases, one had a "short period" of time infectious in the community before they went into home quarantine.

"There are some additional exposure venues up on the website," she said.

But Dr Young said she was "fairly confident" the cluster was "in hand".

"As a result of all of that great work, I'm confident enough that I think we don't need those ongoing restrictions for aged care, disability care, hospitals and prisons, so they will be able to immediately return to their normal practices, they don't need to have those additional visitor restrictions that were put in place late last week because of that evolving cluster," she said.

Dr Young said there was a real risk that Queensland could have positive "cases out in the community".

"These cases could happen anywhere," she said.

"That's why it doesn't matter where you are in Queensland, if you've got any symptoms at all, immediately go and get tested."

Ms Palaszczuk said authorities were hopeful the outbreak was under control.

"As I said the other day, we'd be looking to see if there was any seeding that happened outside that home quarantine.

"Fingers crossed, it's all looking good at the moment."

Ms Palaszczuk said National Cabinet had delegated the issue of freight drivers to the transport ministers to look at.

"I think we do need to have a good conversation with people about encouraging those freight drivers to get vaccinated," she said.

There have now been nine truck drivers who have crossed the border and spent time in the Queensland community while infectious.

Dr Young said she still had concerns about the numbers of freight drivers who have been infectious in the Queensland community.

"There are quite a list of exposure venues that I would really like anyone who lives in Brisbane or Logan to really have a look at and make sure you have not been to any of those exposure venues at those times," she said.

"If we can find people very early on in an outbreak, it means we can immediately respond as we've done with this most recent cluster so we don't have to have restrictions continuing going forward."

"But it's a matter of finding those cases early."

Police were investigating the circumstances around three men who entered Queensland from New South Wales last week, two of whom tested positive to COVID-19.

But late on Monday, Queensland police dismissed the investigation after inquiries found the men had travelled on valid border passes and lawfully entered the state.

Health authorities believed the family of five that tested positive late last week had contracted the virus from one of the men.

More than 14,500 tests were conducted in the past 24 hours, while Queensland Health administered 15,378 COVID-19 vaccine doses.

Ms Palaszczuk said 56.39 per cent of eligible Queenslanders have now had their first dose and 38.08 per cent are fully vaccinated.

The new cases in students came as more children became eligible for vaccination.

"Today the vaccination program for 12- to 15-year-olds opened up, which is wonderful news," she said.

"I know there are a lot of students out there looking forward to getting their vaccines."

The border bubble reopened at 1:00am on Monday, allowing students and essential workers from 12 NSW local government areas to travel into Queensland for essential purposes including school, healthcare, and performing work that cannot be done at home.

People crossing the border for essential work or volunteering must have had at least one dose of the COVID-19 vaccine.

"My recent check tells me those delays remain minimal, but the message is still there for people can expect delays at times.

"We have seen some turnarounds, primarily people coming to work who have not had at least one vaccination."