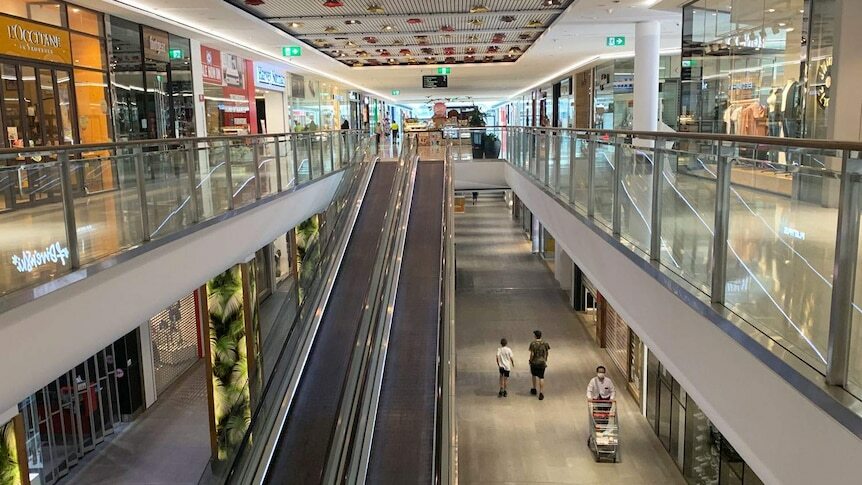 A major Brisbane shopping centre has been listed as a COVID-19 exposure site after an interstate truck driver tested positive after visiting Queensland.

A Queensland Health alert said the driver was infectious in Brisbane last Sunday and Monday before returning to New South Wales.

The driver went to the Westfield Garden City shopping centre at Upper Mount Gravatt on both days, visiting the food court and several other eateries.

The BP service station at Archerfield has also been listed as an exposure site.

Queensland Health said people should regularly check the list of venues on its website, as there may be more locations. It also urged anyone with symptoms to get tested immediately.

Premier Annastacia Palaszczuk said the case was the 10-year-old brother of a four-year-old girl from Beenleigh who tested positive on the weekend.

They were close contacts of the Logan truck driver who contracted the virus in New South Wales and tested positive last week.

Their family had been in home quarantine and Ms Palaszczuk said authorities had "no concerns" about wider transmission.

New South Wales Deputy Premier John Barilaro has announced parts of regional NSW — including Tweed and Byron Bay near the Queensland border — deemed low risk and that have seen zero COVID cases for at least 14 days will emerge from lockdown at 12:01am on Saturday.

Changes in those areas will include allowing five visitors in a house, the re-opening of hair salons with capacity limits, and weddings can have up to 50 seated guests.

Ms Palaszczuk said Deputy Premier Steven Miles was talking to his NSW counterpart about the easing of restrictions in regional New South Wales.

"I have spoken to the NSW Deputy Premier today and we agreed the Cross Border Commissioner and Queensland's Disaster Coordinator should meet to discuss the new arrangements in northern NSW."

Meanwhile Dr Young said she was concerned to see families meeting at the Tweed-Coolangatta border on Father's Day.

"New South Wales thought the issue was so serious that they asked everyone who lived in Tweed to stay at home, so they had made that decision and then you saw that disregard of that requirement," Dr Young said.

"That's what concerns me, that NSW had made a decision and people weren't following that decision."

It comes as the Premier confirmed Queensland Check-In app will soon have the ability to show if someone has been vaccinated.

"We're working through that technology at the moment that's the next step I want to prioritise," Ms Palaszczuk said.

The Premier said 54.28 per cent of eligible Queenslanders have now had their first dose of a COVID vaccine, with 35.8 per cent fully vaccinated.

"We need to be ready for when the next Delta cluster arrives in Queensland," she said.

Ms Palaszczuk said the government's message today was "if you haven't been vaccinated, go and get vaccinated".

"From this weekend, Townsville, Mackay and Rockhampton [vaccination hubs] will be accepting walk-ins," she said.

"We'll be looking at where we can expanding that across other parts of Queensland in the coming weeks."

Chief Health Officer Jeannette Young said 100 families connected to the Beenleigh cluster remain in home quarantine and the vaccination of children was set to ramp up.

"From Monday next week, any Queenslander who is 12 years of age or older is able to get vaccinated, so please come forward and get vaccinated," Dr Young said.

"The more people are vaccinated, the less the risk of an outbreak spreading."

He said 206 people had been approved to relocate to the state today, while another 109 Queenslanders have permission to return.

"We'll have quarantine rooms and we're processing another 200 or so applications across both categories so that system has kicked in and is working," he said.

He said 7,641 vehicles were intercepted at the borders yesterday, with 99 turned around.

Push for Queenslanders to get COVID vaccine at football

Rockhampton MP Barry O'Rourke encouraged NRL fans heading to this Sunday's elimination final to get vaccinated at the same time.

A pop-up vaccination clinic will be set up outside Browne Park in Rockhampton ahead of the Parramatta Eels and Newcastle Knights clash.

"Go to the footy and get shot as well," Mr O'Rourke said.

"Let's hope that this is really successful. The more people that get vaccinated, the better off we are."