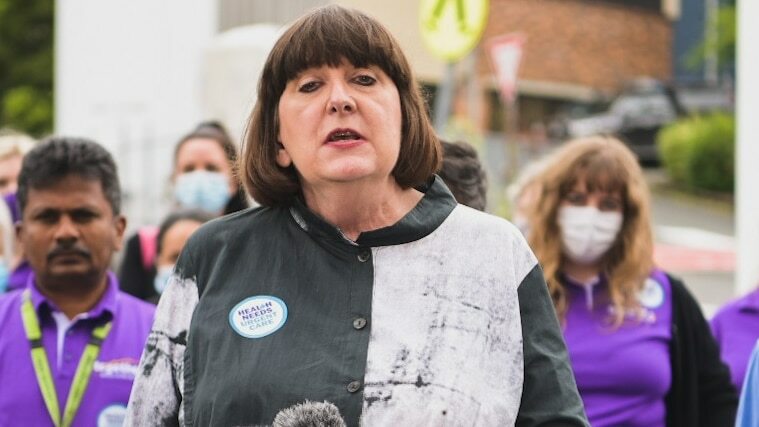 Nurses are "angry" at the stressful conditions they are working under as COVID-19 spreads through Queensland, and say rapid antigen tests (RATs) should be mandated and readily available for essential workers.

The state has recorded 22,069 new cases of COVID-19 and 525 people are being treated for their symptoms in hospital.

Health Minister Yvette D'Ath said 30 patients were in ICU, with eight on ventilators.

Queensland Chief Health Officer John Gerrard said there was now enough data for patterns to emerge on the types of patients needing hospital care for COVID-19.

"If you are unvaccinated, you are nine times more likely to end up in hospital than if you have received a boosted vaccination," Dr Gerrard said.

"We know that double vaccination is not as good as triple vaccination in terms of preventing hospitalisation and, particularly, [we're] seeing a large proportion of the hospitalised are more vulnerable.

"We know if we didn't have a vaccination program as we've had in the last 12 months here in Queensland, the health system would clearly be overwhelmed."

"We're not mandating the third doses at the moment," she said.

"Our health workers, I'm making sure that any staff who are eligible for their third doses can get easy access … they get priority anyway."

She said sourcing rapid antigen tests was a "challenge".

"The figures I saw this morning was 120,000 tests have been distributed to our testing clinics in the last 24 hours," she said.

"We're expecting just short of a million from the Commonwealth in the next week, but around 500,000 of those are point-of-care tests."

"These will not only not alleviate any of the problems with lines at testing clinics, but it'll actually add to the length of time that staff need to be inputting data and spending time with individuals coming forward for tests."

The secretary of the Queensland Nurses and Midwives' Union, Beth Mohle, said it was an "incredibly stressful time for everyone", with thousands of nurses furloughed or off work due to COVID.

"I know that the community is stressed. So too are health workers; they are having to look at what's coming in the coming weeks and they're thinking: 'How are we going to cope, particularly with so many staff being positive or being furloughed?'"

"So things like having rapid antigen tests available for all essential workers so that they can be tested daily. That is mandatory, as far as we're concerned," she said.

"It hasn't been mandated as yet. But that underpins a safe response.

"If we're not keeping workers safe, we will not keep the explosion in Omicron under control. It is vitally important.

"I am pretty angry at the situation that we are in, as are most people, I would think."

Ms Mohle said we should have learned from the vaccine distribution delays to be better prepared with RATs.

"This is an extraordinary situation," she said.

"We should have learnt the lessons and we should have known that we need rapid antigen tests if we're going from elimination to suppression, that's what we were moving."

The Queensland government blamed the RAT shortage on the federal government.

"We expect the remainder of tests to arrive over the next six weeks, however due to the constraints in the supply chain domestically and internationally, supply certainty remains challenging.

"The Commonwealth is responsible for ensuring all other supply for pharmacies and the private market.

"Just like with vaccine supply last year, it's clear the Commonwealth have failed to ensure enough supply for Queenslanders."

Ms D'Ath said there were only two local government areas in the state without any recorded COVID-19 infections since December 13.

Latest figures indicate 91.23 per cent of Queenslanders aged 16 and over have had at least one dose of a vaccine, while 88.02 per cent have had two doses.