Q&A: Examining the Highs, Lows and Doinks of the Current State of NFL Kicking 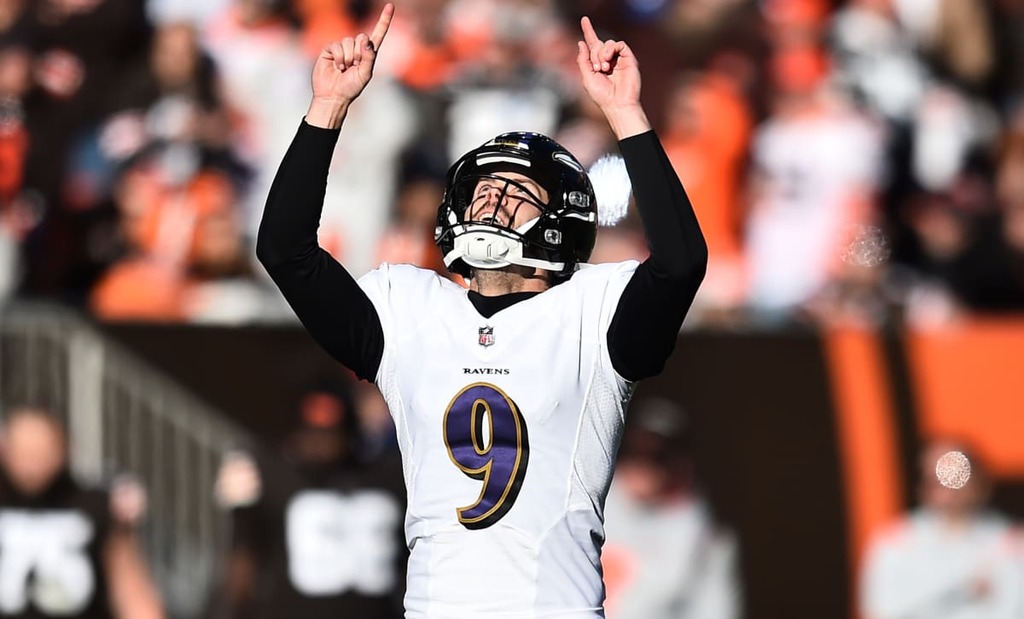 We may be five weeks removed from crowning a Super Bowl winner, but this we know about the 2021 NFL season: It’s been a strange one in the kicking sector. As usual, roughly a third of the points scored were put up via foot. Justin Tucker of the Ravens continued his GOAT trajectory, making nearly 95% of his kicks including a record-breaking 66-yarder. Never have kickers been more accurate from longer distances … and yet, nearly half the NFL teams replaced their kicker during the season. Extra points hovered around 90%, strangely, a lower rate than the equivalent 33-yard field goal (more on this below). And kickers made less than 2% of the NFL’s overall payroll.

This Sunday on CBS’s 60 Minutes, an examination of the state of NFL kicking, the highs, the lows and the doinks. Some outtakes below, edited lightly for brevity and clarity.

This won’t get much debate in the saloon or the salon: Justin Tucker, is the Ravens kicker, is the best in the business.

Jon Wertheim: What do you consider the single biggest factor in a kicker’s success?

JW: You say manage emotions. How do you do that?

JT: It’s almost tough to explain. I focus on the action of kicking the ball and not the consequence. Action over consequence always. What that means to me is focusing on my technique, seeing the ball snapped, seeing the ball come off of the snapper’s fingertip, seeing the ball spotted, picking out the sweet spot of the ball with my eyes very intently—and then matching it up—matching up the big bone on my right foot to that sweet spot, following through.

JW: It’s a lot of precision for something that casual fans may overlook sometimes.

JT: Yeah, I think it’s possible that the casual fan would overlook—or maybe not even recognize all that goes into making kicks. But for us this is, our job. This is our livelihood.

JW: [Your record-breaking kick] you knew the score. Did you know the yardage was going to be a record?

JT: I knew it was gonna be a record once I got out onto the field and I realized, “Oh, we’re only at the plus 48 yard line? I’m gonna have to put a little something extra behind this ball to make sure I can get it there.’ ... We were looking at fourth and 19. And Lamar drops back the pass, finds Sammy Watkins in what I believe was a split safety look, and finds him near the sideline. At the plus 48 yard line with seven seconds left, we get the clock stopped. We run one more play, kinda like a foul ball situation, like, “okay, we’ll scoop up a few extra yards, if not, toss outta bounds, and then we’ll either throw a Hail Mary, or kick the field goal.” And to me, it was never a question—it can never be a question to me—of, are we gonna, you know, throw this or are we gonna kick it? In my mind, I have to be, like, ready from the time my feet leave the white of the sideline to the green of the field. I have to be ready to crush the ball.

Ravens coach John Harbaugh has the good fortune of coaching Justin Tucker. He began his career as a special teams coach and has a special appreciation for the little guys with the big feet.

JW: How good is Justin Tucker?

John Harbaugh: He’s the best ever.

JH: I’m biased but I think an unbiased observer would have to say Justin Tucker’s the best that’s ever kicked.

JW: Is kicking unappreciated or at least underappreciated in the NFL?

JH: You know, I think most people that understand the game understand how important it is. It’s an opportunity to score. And usually, it’s an opportunity to score when the game’s on the line. In the National Football League, there’s balance; there’s parity. Most teams are very similar to one another. A lot of these games are gonna come down to one score at the end of the day, and that’s your guy who’s making the difference in those games.

JW: Help us understand: The Ravens are one of only a handful of teams that have a dedicated kicking coach. How can that be?

JH: Well, when I was a special teams coordinator in Philadelphia way back when, and—you know, you coach kickoff coverage. You coach punt return. You coach all the details of all 11 players. And you realize how little you actually know about kicking. You know, it’s like havin’ a swing coach in golf. You might understand the game but you don’t understand the swing. And we had a kicker, David Akers, and I tried to figure it out and do the best I could. But I came to realize I couldn’t do the job very well. And so, we hired Randy Brown—to me, he’s the best that’s ever done his job. And he’s also a great special teams coach. And then he carried over here and he’s done the job since we got here.

JW: There are not 32 Randy Browns, though.

JH: There aren’t 32 Randy Browns. Maybe there should be.

Morten Andersen, now 61, is one of two kickers in the Pro Football Hall of Fame. (Jan Stenerud is the other). He’s watched the art of kicking evolve.

JW: Today almost half the NFL teams have already gone through more than one kicker. Why do you have this turnover?

Morten Andersen: Because there’s a misunderstanding that if it’s a little bit broken, we’re not willing to fix it. We’re not willing to invest time, especially a young guy that comes in. We’ll just replace him with another broken guy. It’s not like an offensive lineman when you have backups. We’re it, you know? We’re the guy. We’re the person that will take care of that job on that team. So there’s 32 jobs in the world. So it’s an exclusive, very difficult place to get into.

JW: What’s been the biggest difference in this improvement in accuracy and distance that, statistically anyway, we’ve seen?

MA: Well, you don’t have an offensive lineman that had just gone 10 plays, sweaty hands, gloves on, and now he’s gotta put on a different hat and become a long snapper.

JW: That’s what you had?

You know, I spoke with my Pro Football of Fame brother Jan Stenerud, and he said he was lucky back in the ’70s if he got, like, three live kicks with his holder all week. Now they can hang out for hours on every single day and grind and fix that.

JW: Wait, this is a Hall of Fame kicker, and he’s saying before Sunday’s game, he’d have had three live kicks the entire week?

MA: “Hey, Lenny Dawson, please, can we get Lenny? Can we—do you have a second?” You know? So it was a whole different thing … I mean, these were all starting offensive linemen, sweat dripping from their face onto their hands, blood and dirt—and now here I come, and would like a nice vertical ball here from this guy. And it’s the least of his concerns.

Connor Barth kicked for four teams in his 10-year NFL career. Now 35, he is back in his hometown of Wilmington, NC where he works for Blue Shark vodka. But, in part because of the churn in the profession, he’s considering a comeback.

Connor Barth: I think it’s a mental thing. You walk out there, the 33-yard-line now, and you’re just like, “Man, this is only for one point.” You know? And sometimes if it’s a change of possession really quick or an interception that gets run back for a touchdown, you don’t have that chance to jump into the net and get a few. It’s not a long field goal but it’s still one where you’d like to, like, have a couple—couple practice kicks into the net before you go out there. So, like, I think you’re just seein’ that, like, man, this is only one point. It’s just weird, it just plays with your head a little bit.

JW: What do you see when you watch Justin Tucker kick? What makes him so good?

CB: He’s almost like Tiger Woods. His ball contact is just—can’t explain it. It’s almost perfect every time. He’s got a gift. His leg speed, and the way he contacts the ball ... And his ball contact, the way he hits the ball with his foot is just—it’s so perfect every time. And obviously, he’s perfected his craft, of his leg swing and his mechanics. I think he goes out there and he knows that, “Hey, I’m gonna put it through every time.” And I think that is the biggest thing for a kicker. You gotta know, no matter the conditions, you’re gonna go out there and put it through every time.

CB: Oh, I think, if the conditions are right, absolutely. I think [Matt] Prater, [Brandon] McManus, Justin, I think those three guys would—

JW: Snapping from the other side of the mid-field?

CB: Yeah. I think it could happen. I would love to see it.

CB: Yeah, I just think records are always meant to be broken. Right?

JW: We’re still hung up on this turnover. Almost half the NFL teams this year have cycled through multiple kickers. Are they just impatient?

CB: Yeah, there’s a lot of impatience. I think it goes back to the expectations now that you have—you’re trying to find that guy that’s as good as these elite guys that are kickin’ 95%. And they think it’s out there. And I’m sure it is. [But] I think there’s a point where it’s, like, “Man, let somebody get settled in and get things worked out.” You know what? They do that with every other position. Let me tell you that right now. I mean, there’s plenty of guys that have gotten a lotta chances in other positions that are still trying to figure it out. And for kickers, for some reason, they’re just like, “Eh, he missed his kick. He’s outta here. Let’s go get somebody else.” And that guy’s not gonna do any better. I think there is a tight leash and that cord gets cut really quick for some reason.