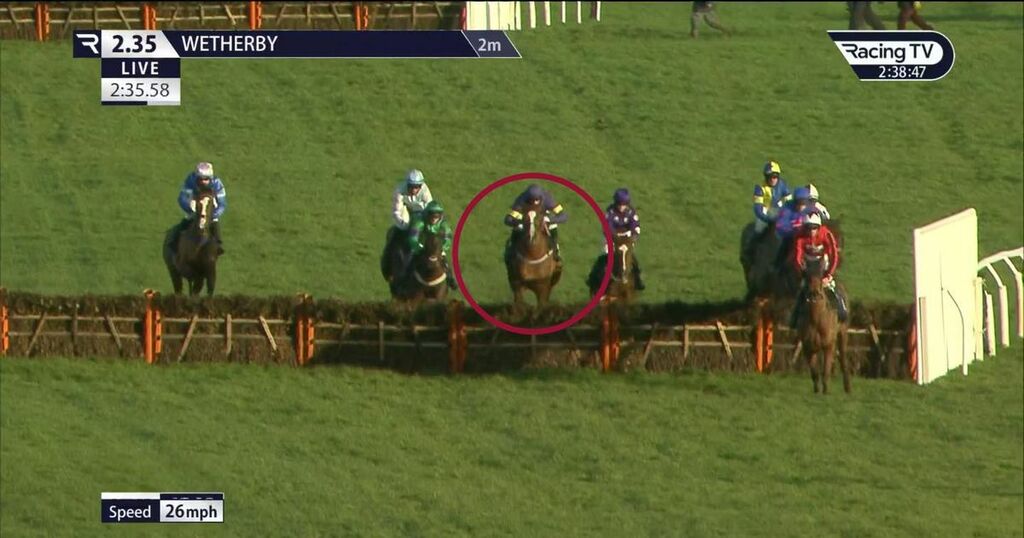 Punters heaped praised on a jockey who gave absolutely everything to get a favourite to win.

Kevin Jones put in a huge effort on Global Agreement, the narrowest of scorers at Wetherby.

The five-year-old was backed into 7-4 favourite to win his second race inside a month.

But those who took the odds about the market leader would not have been confident watching the Every Race Live On Racing TV Handicap Hurdle.

Global Agreement came off the bridle and lost his place as early as the fourth flight.

He was hard at work on the Milton Harris-trained hotshot as the leaders quickened off the home turn – and appeared to be going nowhere fast.

Maccloud took the lead and set sail for the winning post under Kevin Brogan.

Then Morgenstern rallied in tremendous fashion to join his wandering rival at the final hurdle– and the pair looked sure to fight out the finish.

That was until Jones galvanised Global Agreement for his unbelievable late surge.

With the nearside rail to guide him, the hurdler flew home to snatch the spoils right on the line.

After unsaddling, Jones said: "I knew coming to the last I still was in with a chance, as the other two had gone hard early.

"But actually I didn't think I would win until getting close to the line.

"I think back in trip today to two mile and then going a good gallop probably hasn't helped. He's needed every inch of the run-in today."

The jockey needs just a couple more winners to ride his claim out – and he said when that does happen, all the graft will have been worth it.

"It has been a long road, a lot of injuries, a lot of hard times, a lot of sleepless nights but I can't wait to get there. And long may it continue after," he added.

"It's a buzz that I get up every morning for and to ride for a trainer (Harris) that's in-form, he puts confidence into you – it really does help.

"It's not over yet. He has still got a few horses there that haven't shown their faces so hopefully they are the ones that can carry on through the rest of the winter and lead into Cheltenham."

Global Agreement's backers were thrilled with the result.

One said on social media: "Unbelievable ride by Kevin Jones onboard Global Agreement to get him home at @WetherbyRaces."

And a third person added: "What a ride that is Kevin Jones on Global Agreement – lands a bit of a gamble."