Public celebration of Ganesh festival restricted to 3 days in Bengaluru 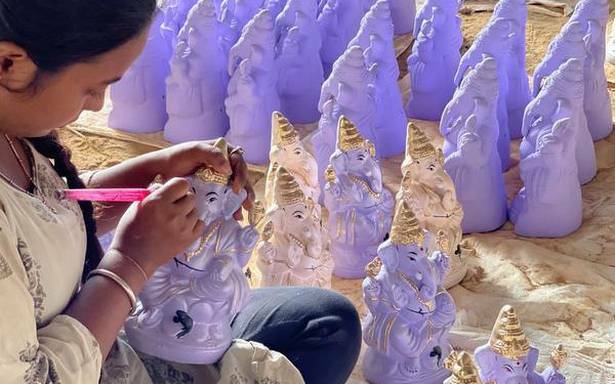 Public celebration of Ganesh festival has been restricted to three days in Bengaluru, contrary to the five days permitted in the guidelines issued by the government of Karnataka on September 5. Only one public pandal will be allowed per ward in Bengaluru.

A decision to this effect was taken on September 7 during a meeting between BBMP Chief Commissioner Gaurav Gupta and Police Commissioner Kamal Pant.

Mr. Gupta said, “Last year too, we had allowed public festivities only for three days. With the Assembly session coming up, police have information about a few protests as well. We have taken this decision to restrict gatherings of people.”

Bruhat Bengaluru Mahanagara Palike (BBMP) notified city specific guidelines on September 7. City police and BBMP officials will finalise the venue of public celebrations of the festival in each ward by September 9 based on applications received, the guidelines said.

All cultural programmes, any use of loudspeaker and DJ sets are banned at pandals. Organisers cannot hold any processions either while bringing the Ganesh idol to the venue or during immersion of the idol. Idols installed in public places cannot be taller than four feet, not made of Plaster of Paris, and have to be immersed in mobile immersion tanks or at specified artificial ponds that will be created for the purpose.

At public pandals, all organisers have to carry a negative RT-PCR test report and vaccination certificates. The organisers have been directed to organise vaccination camps at the pandals in collaboration with health officials of the civic body. Only a total of 20 persons can be inside the pandal at any given point of time. Home guards and marshals deployed at all pandals to ensure there is no crowding and COVID-19 Appropriate Behaviour is followed. Violators will be penalised.

Police Commissioner Kamal Pant said curfew would be in force from 9 p.m. BBMP ward officials have been tasked with sanitising the premises of all public pandals and temples where Ganesh idols have been installed.

‘No immersion in lakes’

Immersion of Ganesh idols at lakes has been banned this year. Idols installed in homes cannot be taller than 2 feet, and they have to be immersed in buckets at home or in mobile idol immersion tankers, said Chief Commissioner Gaurav Gupta. A mobile idol immersion tanker will be assigned to each ward. BBMP officials will use public address systems to inform the time and place where the service can be availed within the ward.

Even idols installed in public places and temples must be immersed in mobile tankers. Artificial immersion ponds will be created for large idols at select locations in Bengaluru where immersion will be allowed with a minimum number of people but no procession, Mr. Gupta said.