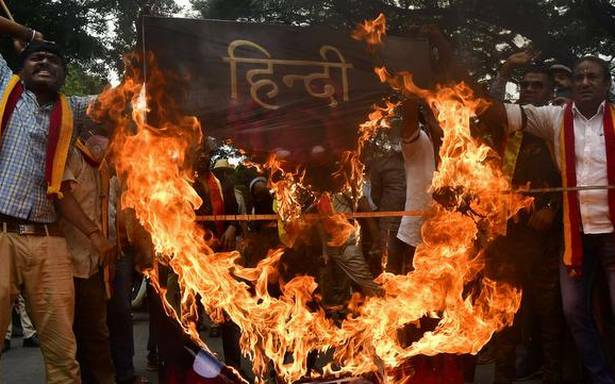 Several Kannada groups and Janata Dal (S) party workers staged protests against the “Hindi imposition” across the State on the occasion of Hindi Diwas on Tuesday.

Karnataka Rakshana Vedike (KRV) claimed to have picketed over 2,000 banks across the State demanding services in Kannada. Even in cyberspace, the hashtag #StopHindiImposition gained about 60,000 tweets.

Former Chief Minister and JD(S) leader H.D. Kumaraswamy tweeted, “India is a union of many cultures, languages and people. Why is there a stupid attempt to impose one language over us?” He said that Hindi was “one of the languages of the Union, nothing more.”

JD(S) workers, led by T.A. Saravana, held a demonstration in the city. Joining in the protest, Congress leader Siddaramaiah tweeted to say he was not opposed to learning Hindi, but to the “cunning imposition of a language”. The BJP maintained silence.

“All banks should offer services in Kannada, including in their printed material. Those from outside posted here must learn Kannada or be transferred back to their home States,” demanded T.A. Narayana Gowda, president of KRV. The forum also petitioned all MLAs and MPs from the State to raise the issue of the necessary Constitutional amendments to Articles 343 to 351 that provide primacy to Hindi.

Campaign on job reservation for Kannadigas trends on Twitter

Kannada activist Vatal Nagaraj led protests at Mysore Bank Circle and said Kannada must be the language of preference in which all services are available in the State. “Leave alone the Union government, implementation of Kannada as an administrative language in the State is still not complete,” he said.

Several prominent celebrities, prominent among them actors Dhananjay and Chetan Ahimsa, also took to Twitter to voice their opposition to “Hindi imposition”.