Can The Capitol Insurrection Result In Prosecution Of Members Of Congress?

By The Insider, Contributor 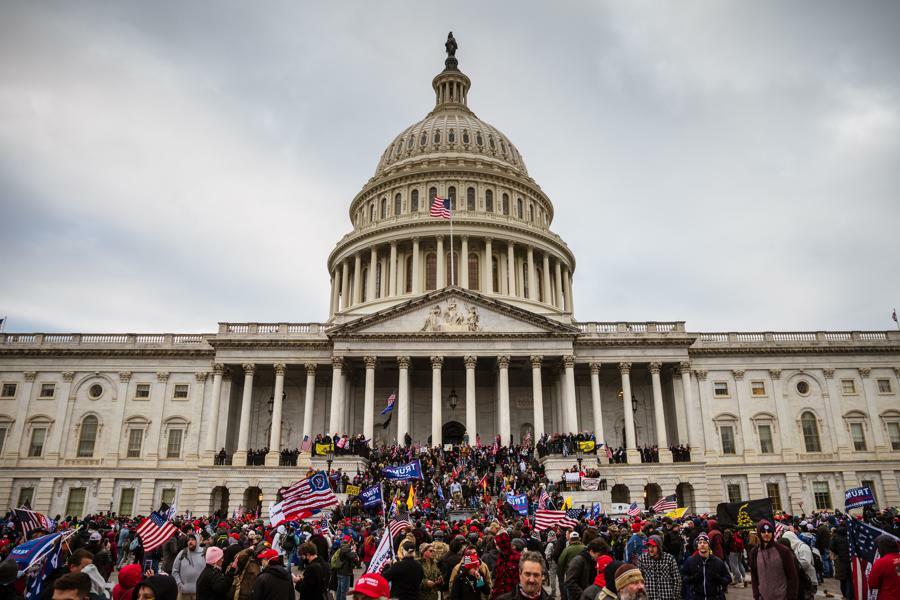 Can the Capitol Insurrection Result in Prosecution of Members of Congress?

Congress, however, is not the only body that can investigate lawmakers’ involvement in the January 6th Capitol insurrection.  The Department of Justice may explore criminal violations by members of Congress in connection with the attack on the Capitol. Using grand juries, federal prosecutors can investigate the same conduct more nimbly than can Congress. Grand jury subpoenas provide broad subpoena power, and federal prosecutors have strong tools for enforcing compliance with grand jury subpoenas. The grand jury’s sweeping investigative powers—and the absence of any applicable policy, privilege, or immunity shielding members of Congress from prosecution—will allow prosecutors—if they deem it justified—to investigate and indict lawmakers for criminal activity related to the Capitol attack.

In July 2021, the U.S. House of Representatives formed the Select Committee to investigate the January 6th attack on the Capitol. The Select Committee called for the production of records from government agencies and social media companies on August 25. On August 30, the Select Committee issued instructions to 35 social media, email, and telecommunications companies to preserve routinely kept records which may be relevant to the investigation.  The preservation requests target the records of hundreds of individuals who participated in or potentially helped plan the riot, including current lawmakers. The Select Committee’s chairman explicitly stated that the panel intends to figure out the extent to which members of Congress participated in the insurrection.

The preservation requests seem relatively straightforward, as does the Select Committee’s authority to demand these records by subpoena, and these demands have precedent in recent history. As of September 9, the Select Committee had already received thousands of documents in response to their August 25 letters. Because the Constitution does not expressly authorize Congress to punish witnesses for contempt, however, the Select Committee has limited options for enforcing its subpoena power. One option is for Congress to send its sergeant-at-arms to arrest the offender, who is then tried before the House and who may ultimately be detained in the Capitol itself. Neither Chamber has done so since 1935, rendering this power almost exclusively theoretical.  The House may vote to refer the witness who fails to comply with the subpoena to the United States Attorney for the District of Columbia for criminal prosecution for contempt of Congress under 2 U.S.C. § 192. A third option is to file a civil suit in federal district court directing compliance with the subpoena, which will cause a substantial delay.  Accordingly, if a member of Congress tries to obstruct a company from turning over his or her records to the Select Committee, the Select Committee has limited recourse for ensuring prompt compliance.

Federal prosecutors have been investigating the Capitol attack as well. Since January 6, federal prosecutors have charged more than 600 defendants with crimes ranging from conspiracy to property destruction, theft, and violent crimes.  In the six months following the insurrection, prosecutors charged nearly 235 defendants with corruptly obstructing, influencing, or impeding an official proceeding, or attempting to do so. Members of Congress are not immune from becoming targets of such an investigation.  The Select Committee is looking into sitting members’ involvement in the Capitol attacks. Federal prosecutors, not known to be shy, can as well.

If found to have aided participants in the Capitol insurrection, members of Congress could face a variety of federal criminal charges, including aiding and abetting, obstruction of justice, and conspiracy. In the days and weeks before the riot, a handful of House Representatives promoted the January 6th rally, encouraging their supporters to travel to the nation’s capital for the protest. Some lawmakers may have communicated with leaders of Stop the Steal and other protest organizers in the lead up to the riot. Other members of Congress have been accused of giving tours of the Capitol just days before the attack.

Assume hypothetically that a representative spoke with rioters over the phone in the days before the attack, or while the attack was in progress. Such a lawmaker could be investigated and, if facts warrant, possibly charged with aiding and abetting an offense against the United States under 18 U.S.C. § 2, or obstructing an official proceeding under 18 U.S.C. § 1512(c)(2). In theory, the member of Congress could also face conspiracy charges under 18 U.S.C. § 371 for coordinating with protest organizers to hinder Congress’s certification of the Electoral College vote.

Assuming a federal prosecutor can build a case, the next question is whether a member of Congress is subject to criminal prosecution in connection with the January 6th attack on the Capitol. The answer to this question is yes. For starters, no Department of Justice policy exists that would shield members of Congress from prosecution while in office. Moreover, the Constitution’s Speech or Debate Clause, sometimes an obstacle to charging members of Congress who act in their official capacity, presents no immunity from prosecution for communicating with constituents to plan an attack on the Capitol.

Prosecutors considering indictment for aiding and abetting, obstruction of justice, or conspiracy may want access to the lawmaker’s phone records, such as call logs and cell tower location information, directly from the lawmaker’s telecommunications company to determine with whom the lawmaker spoke and when. If federal prosecutors decide to investigate members of Congress in connection with the Capitol attack, the grand jury process enables them to gather information quickly and efficiently. Federal grand juries have sweeping authority to investigate suspected violations of law and may subpoena documents like phone records without prior authorization from any court. Grand juries do not need court approval to issue an indictment, either. Absent any constitutional or testimonial privileges, courts typically assist grand juries in securing compliance with subpoenas. Unlike a House committee subpoena, a grand jury subpoena can be enforced quickly against the telecommunications company. The Federal Rules of Criminal Procedure authorize courts to hold in contempt witnesses who, absent adequate excuse, disobey subpoenas issued by federal courts in that district.

A separate question is whether prosecutors could use grand jury subpoenas to obtain relevant phone records directly from the member of Congress. The Speech or Debate Clause has been interpreted to prohibit evidence of legislative acts. Some appellate courts have interpreted the Speech or Debate Clause to prohibit compelled disclosure of written legislative materials. Regardless, records documenting a lawmaker’s phone communications with rioters likely fall outside the scope of “legislative materials” contemplated by the appellate courts, insofar as coordinating a violent attack on the Capitol is not a regular part of the legislative process.

Prosecutors can investigate and, if the facts warrant, pursue prosecutions of members of Congress for conduct connected with the January 6th Capitol attack.

Jorja Knauer, an attorney with Morvillo Abramowitz, assisted in the preparation of this article.