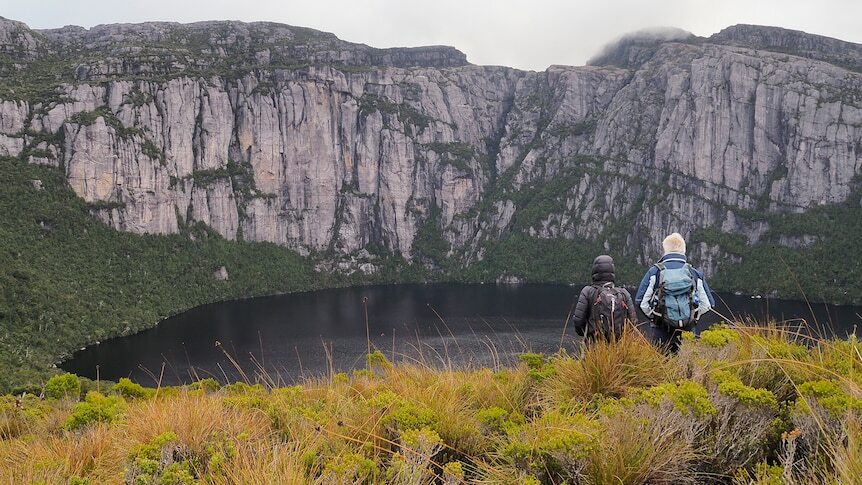 The landmark project the Tasmanian government hopes will cement the state as a key bushwalking destination will lose money unless fully occupied for the entire six-month walking season, despite expectations it will be significantly hampered by the region's notorious wet weather, internal documents obtained by the ABC reveal.

The government has been forced to double the funding for the proposed new three-day iconic walk in the Tyndall Range after investigations revealed it would cost $37 million, much higher than the $20 million that had been allocated, despite two other options considered coming in below the $20 million cost.

It is hoped the "New Iconic Walk" will build on the success of the Overland Track, as well as the Three Capes Track on the Tasman Peninsula.

According to internal documents obtained under Right to Information laws, Parks and Wildlife looked at three options for the new walk:

It found both overnight options would suffer from issues with poor weather ruining the experience, due to obstructed views and impacts on comfort and safety.

According to the Bureau of Meteorology, nearby Mount Read receives an average of 3,581 millimetres of rainfall each year, across 216 days.

Rainfall is lowest in February, when there is an average of 179mm across 12 days.

"A significant disincentive to participation is the poor weather and its impact on the experience and enjoyment," the document said.

One self-described "keen, regular bushwalker", whose name has been redacted, wrote to senior Tasmanian politicians and the head of Parks and Wildlife in April to outline their concerns about the project, having recently walked in the Tyndall Ranges area.

They said the area's fragility "combined with the region's famously bad weather" made the proposed Tyndall Range walk an "extremely poor option".

"The likelihood of lesser-experienced walkers — for whom are the primary market for 'Iconic Walks' like Three Capes — finding themselves in dangerous situations due to unpredictable weather and needing assistance/rescue would be unacceptably high," the walker wrote.

The three-day walk would have operating costs of $2.87 million a year, and includes a large area that could put it in conflict with mining exploration and development.

The internal documents reveal fees for walkers are estimated at $576 for bunk rooms, or $288 per person for camping, and the walk would need to have 100 per cent occupancy for the six-month season to break-even on operating and maintenance costs.

Full occupancy would be 30 people in bunk rooms and 20 campers.

"If occupancy falls below 100 per cent, then the business enterprise will operate in deficit," the document says.

"To correct this, the visitor fee must be increased. Increasing the fee will reduce market appeal and estimated visitor numbers."

Both of the proposed shorter walks would lose money compared to operating costs — even at full capacity.

A cost-benefit analysis in the internal documents shows the economic benefits to the state overall would only be positive for the three-day track option — at 1.06, or six cents made for every dollar spent.

But there is a discrepancy between the internal documents, dated May 2021, and the feasibility study published this week, which shows a slightly higher benefit, at 13 cents for every dollar spent.

Support among just the West Coast community rises to 60 per cent for the three-day option but is highest at 75 per cent for the day-walk track, however, the internal documents note a small sample size.

Large swathes of the Right to Information documents have been wholly redacted.

She said significant public consultation, market testing and assessments indicated it would be a success.

The final feasibility study states that while weather was a potential barrier to enjoyment, high-standard roofed accommodation and refuge shelters along the track had been recommended to improve safety and comfort for walkers.

It said the final fees were yet to be decided, but that the project would need to be subsidised if not enough people participate.

The walk will not be built until 2028 at the earliest.