By Joan E Greve in Washington 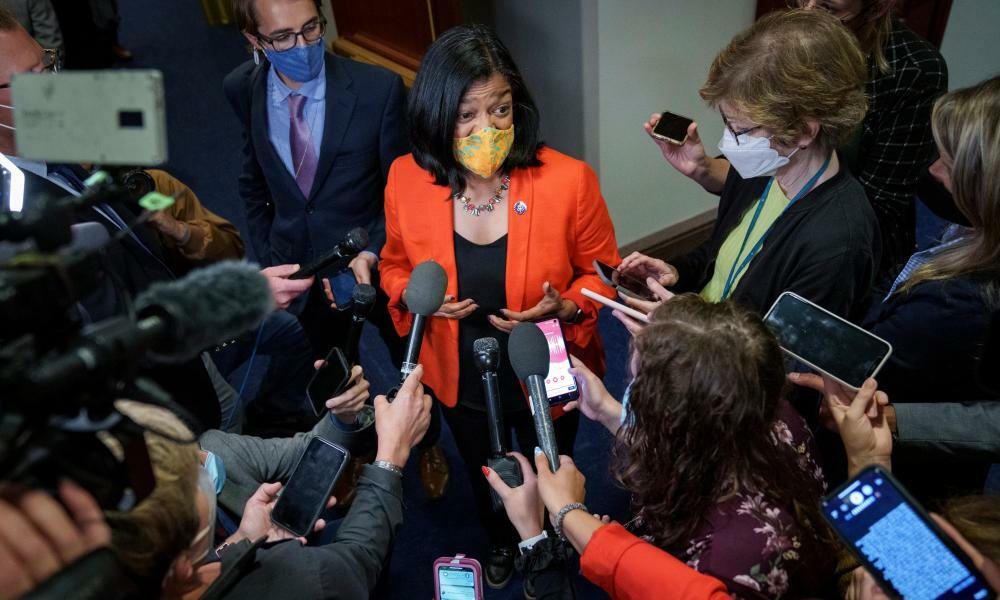 When House Democrats were forced to delay their planned vote on the bipartisan infrastructure bill earlier this month, the reaction from progressives was surprising, considering it is a key part of Joe Biden’s domestic agenda.

Rather than lamenting the delay of the vote, progressive groups praised the Democratic lawmakers who had demanded the scheduling change.

The Congressional Progressive Caucus – a group of leftwing Democrats in Congress – had argued that the infrastructure bill could not pass on its own because if it did, Democrats would lose vital momentum for passing the much larger reconciliation package, which includes huge investments in climate initiatives, affordable childcare access and healthcare and other social programs.

“We applaud House Democrats who are boldly holding the line for better care for our families, our planet, and our futures, not the bottom line for big corporations,” the progressive group MoveOn said.

After years of complaints that leftwing Democrats in Congress have consistently failed to wield their power effectively, the CPC is now receiving plaudits from supporters for their strategy in the infrastructure negotiations.

The progressives’ success has emboldened their allies and raised questions over how they may use that power in the next stage of negotiations as Biden seeks to pass an agenda that many have compared to the 1930s New Deal or the 1960s Great Society.

For progressives outside the Capitol, the CPC’s success was a validation of their years-long efforts to push for more robust climate and healthcare policies.

“I think often movements run into crises of powerlessness when we spend so much energy [on] an election or having a certain candidate come through in order to just fall on all of those promises,” said John Paul Mejia, a spokesperson for the climate group Sunrise Movement.

“Thankfully with progressives, what we have seen is that by building accountability and power with folks inside and outside of the halls of power, we’ve actually been able to do some pretty wild things that are in line with what our movement seeks to do in ensuring the vision of the Green New Deal.”

Some progressives have said the fight felt overdue, as the CPC has long weathered criticism that its members raise objections to bills only to back down at the last minute.

“Progressives were seen as caving in the ninth inning of a game, and there was a years-long need for credibility if the progressive bloc wanted to be seen as an actual bloc in future fights,” said Adam Green, a co-founder of the Progressive Change Campaign Committee. “And this was that moment because the stars aligned.”

Green added that the victory could encourage progressives to pursue hardline tactics again, saying, “Now that that’s done once, [CPC chair] Pramila Jayapal and the progressive caucus will have more credibility and therefore be able to impact negotiations more in all future fights.”

Progressives’ strategy could have a significant impact on the final version of the reconciliation package, which lawmakers continue to negotiate over.

The legislation was previously expected to cost about $3.5tn, a figure progressives already considered to be a major compromise from their ideal price tag of $10tn. But now, more centrist Democrats, including Senators Joe Manchin and Kyrsten Sinema, are pushing for a smaller bill. Manchin has suggested going as low as $1.5tn for the legislation.

Mejia strongly urged progressives to once again stand their ground in the next stage of negotiations, warning that a smaller bill would fail to address the serious issues facing the country.

“We need investment at the $3.5tn level in order to truly begin addressing the crises that have plagued us over the past many years,” Mejia said.

“When we face our next hurricane or when we face floods in our homes, we won’t care about how nice Joe Biden was to Joe Manchin or Kyrsten Sinema. We’ll care about whether he made the $3.5tn investment or not to keep our communities and families safe.”

As they push for a larger reconciliation package, progressives are also seeking to shift the narrative about the lawmakers who are advocating for a less comprehensive bill, such as Manchin and the Democratic congressman Josh Gottheimer.

Progressives argue that it is incorrect to describe those politicians as “moderate”.

The progressive congresswoman Alexandria Ocasio-Cortez said in a tweet last week, “Moderates make up a sizeable chunk of the party. The 4% of members threatening the full agenda of a moderate president are not moderates. How would you describe these demands: fossil fuel subsidies, protect the rich from taxes, keep prescription drug prices high? Conservative!”

Indeed, some of the most vulnerable members of the House Democratic caucus have echoed their progressive colleagues in emphasizing the need to pass both the infrastructure bill and the reconciliation package.

Six of those “frontline Democrats” penned a Newsweek op-ed on Monday, in which they wrote, “[W]e are the serious, dedicated lawmakers who earned the Democratic majority. We fight every day to deliver for our voters. And we’re committed to getting both the infrastructure bill and the Build Back Better Act across the finish line.”

Matt Bennett, executive vice-president for public affairs of the centrist thinktank Third Way, warned that it will be moderate Democrats who suffer the consequences in next year’s midterm elections if the party fails to pass the reconciliation package.

And while Democrats like Gottheimer have emphasized the urgent need to pass the “historic” infrastructure bill, Bennett argued that bill alone would not be enough to get vulnerable moderates re-elected next year.

“There’s a lot of good stuff in the infrastructure bill,” Bennett said. “But it’s just not enough. We have to do more to show voters that we are listening to them and making their lives better in some fundamental ways.”

The stakes could not be higher for Democrats, and progressives like Mejia are watching closely as the negotiations unfold. He condemned lawmakers such as Manchin and Sinema for their “relentless will to fight for their corporate donors instead of their own constituents”, and he said their actions only underscored the need to elect more progressives to Congress, potentially by supporting primary challenges to more centrist Democrats.

“At the level of crisis that we are facing right now, we need no further obstructionists in power keeping us from getting to the solutions our communities desperately need,” Mejia said.

“And if a congressperson or a leader in any shape, way or form can’t deliver on the will of the people in a democratic process, then they need to be replaced with someone who will.”